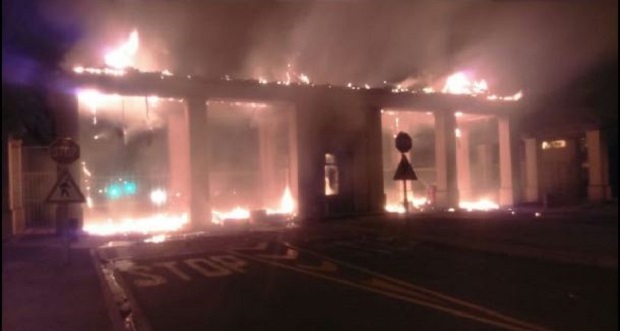 Three buildings were set alight and petrol bombs found at university campuses overnight. The fires were set at Wits University, the Cape Peninsula of Technology (CPUT) and the University of Kwazulu-Natalâ€™s (UKZN) Pietermaritzburg campus.

Parts of the Central Block building have also reportedly been flooded.

Wits has been operating as usual this week, despite student protests and a low turnout of students in classes.

On Tuesday, Wits management gave the police complete control of the campus. There remains a heavy security presence at Wits.

Meanwhile, there was also a fire at CPUTâ€™s Belville campus. The Information Centre and Main Gate has reportedly been set aflame.

EWN reports that a minibus taxi and at least one other vehicle belonging to private security were torched early on Wednesday morning. CPUT has opened a case of attempted murder following an incident where two security guards were locked inside a burning building.

CPUT resumed academic activity on Tuesday with a heavy police presence. Violence broke out when Vice-Chancellor, Dr Prins Nevhutalu, refused to meet with protesting students and private security told students he had locked himself in his office.

Chaos broke out at CPUT when students and security clashed. Students armed themselves with rocks, bottles and sticks against police who fired stun grenades, rubber bullets and teargas.

Nineteen protesting students have been apprehended following the violent protests at the Belville and Mowbray campuses on Tuesday. According to CPUT spokesperson, Lauren Kansley, charges have been laid against the students.

CPUT has suspended all academic activity until further notice.

#CPUT Reports that police are now moving into residences at the Bellville campus and are making arrests. #CPUTShutdown #FeesMustFall2016

The South African Police Services (SAPS) have confirmed that the DSLT building and the TV lounge at the Malherbe campus were set alight. Reports say that the Malherbe residence had been evacuated late on Tuesday night.

At the same time, the Council Chambers located at the centre of the campus was petrol bombed.

#UKZN – More fires set at the PMB Campus overnight. The Malherbe Res had to be evacuated #Fees2017 #Arson @News24 pic.twitter.com/9k13tfP6we

And finally, the Tshwane University of Technology (TUT) was due to resume academic activity on Wednesday morning. However, students have barricaded the entrances of the campus with burning tyres and are not allowing students and management to pass through. Student leaders are calling on management to shut down the university and address their demands of free education.

There remains a heavy police presence at TUT.