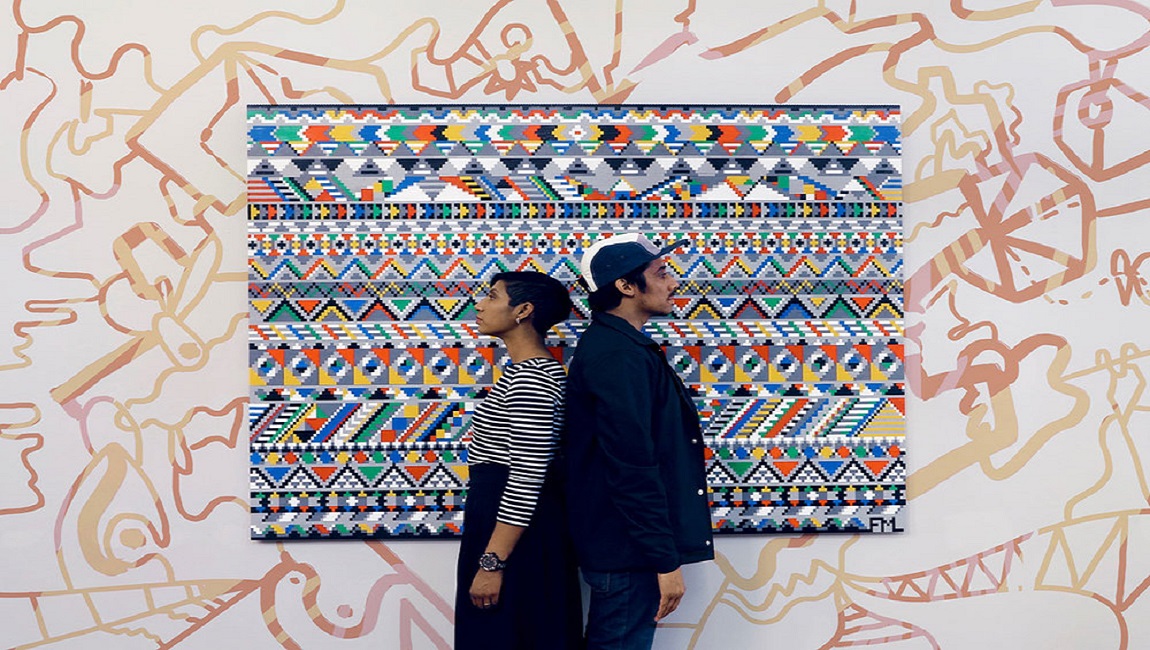 If you’ve walked through Johannesburg, you might have noticed bus shelters that are unexpected bursts of colour against the otherwise grey backdrop of the city streets. Cape Town-based artist/designer duo Faatimah Mohamed-Luke and Al Luke of the creative studio Mrs & Mr Luke transformed eight bus shelter in Rosebank, Melville, Braamfontein, and Greenside. The duo were approached by Saatchi & Saatchi Cape Town as part of Halls SA’s project to collaborate with local artists to create a series of public artworks in Johannesburg as part of its “Own the Moment” brand campaign. We spoke to Mrs and Mr Luke about their work. What was the idea behind the concept of transforming bus shelters?

Al: We really enjoyed the challenge because whereas a wall is a flat surface and you can console that a lot easier, people expect a certain thing from bus shelters. We wanted to give people a very immersive experience. Faatimah did the inside of the bus shelters and I did the outside.

Faatimah: The moment kind of fixated what it would look like. We wanted to take the bus shelter out of its current element. So if it was near greenery we would do a contrasting colour, if it was in the city surrounded by grey we would do a bright luminous colour just so that it stood apart from what it usually looked like, but also its surroundings.

Al: It’s simple, it’s bold, but when you get up close there’s a lot of different elements to look at. How do the bus shelter installations differ from your other work?

F: We usually work separately. This was our first collaboration on one piece. I do art made out of plastic building blocks.

A: Our work is very different. My work is more expressive, the only way that I can explain it is that it’s planned and unplanned. I have certain elements that I plan for but the rest of the elements – like the line work – is all done at the time without planning. My work is a lot of working with an idea in mind and trying to communicate it with line work, shape, or abstracts. Faatimah, why do you use lego in your work?

F: It’s an interesting medium because it’s not considered a traditional art medium, it’s considered a children’s toy. It’s fun to play with and create something seen as art from something that isn’t an art medium. I think the art industry as a whole is very limited and limiting, and it’s our job as artists to broaden the idea of what art is and open the door for new artists to create what they want to and be able to call it art. Do you think public art is a good step to make art more accessible to people because galleries can sometimes be exclusionary and intimidating?

F: That was one of the most exciting things for us. We both usually display our work at exhibitions in galleries or art fairs. We love the idea of making art more accessible. I think it’s something people enjoy if they are allowed to and if they feel included. I know that a lot of people do feel excluded in exhibition spaces and art fairs which can be exclusive and intimidating. We really wanted to create that same feeling in the public space – we wanted people to feel that the installation was specifically for them.

A: Even now, there are some galleries and spaces that I don’t feel are comfortable spaces, I almost feel like they aren’t made for me. The bus shelters are a labour of love. We wanted to create something cool to look at, that people would feel happy to look at. I don’t know if it caused change but it’s made people look at bus shelters differently and from the comments and feedback we’ve received people are just so happy that we transformed these bus shelters. What was the process of installing the first bus shelter like?

A: That first one was the scariest for me. It’s the bright pink one. It’s still the most special just because we figured out a lot of things on that first day. Which is your favourite and why?

A: For me, it’s the bright yellow one on Jan Smuts. That one was really inspiring because the story was about a guy who moved to Joburg and uprooted his whole life to follow a dream. What do you hope people can take from these bus shelters?

F: Happiness. A little bit of joy to your day.

A: Childlike happiness. Like when you have your first coffee, a little bit of a perk. Something positive, colourful, and cool to look at.

F: In the broader sense it should open up avenues of public art installations. We live in a vibrant design and art-oriented country. We should be able to live with art and design on a daily basis. It shouldn’t be something that you have to take time off your schedule to go to a gallery to see. It should be everywhere, on every corner. It will help normal everyday people, but also kids, to see that this is an actual viable avenue for your life. We need to have that conversation saying this is art, people do this everyday and this is an option for you.