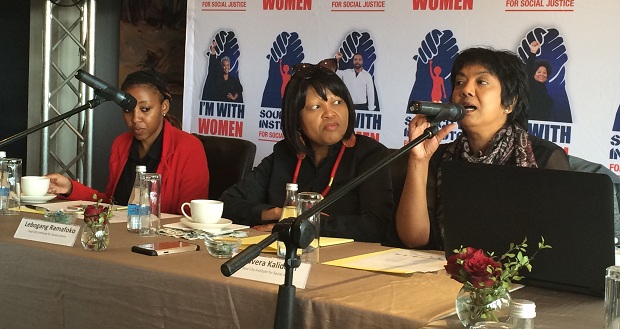 On Thursday morning, The Soul City Institute (SCI) hosted a media briefing entitled: â€œViolence against women – can it be stopped?â€ Lebohang Ramafoko, SCI chief executive officer, Tshepiso Maleswena, student activist from One in Three, and Savera Kalideen, SCI manager advocacy, were on the discussion panel. The Daily Vox rounds upÂ the conversation.

So, where do we even start?

First, we need to address our notions of masculinity and femininity. What does it even mean to be a woman or a man?

We groom women to be ladies, especially in private schools, while and men are taught to go out there, conquer the world and to get what they want. Girls are taught to passive, and as a result, when they are confronted with violence, they don’t know how to deal with it.

And what about social norms?

Social norms persist because we are so tolerant of them. So how do we change social norms? We need to accept that talking about violence makes us uncomfortable, but, importantly, if women experience such shame and indignity, we need to suck it up and talk about it.

If young women in our society experience such indignity we have to have the balls to talk about it. – Lebohang #VAWSCIPresser @SoulCity_SA

Itâ€™s time to get over what is inappropriate and appropriate

So you want to #RememberKhwezi? Here is what you need to know

As soon as a woman takes off her shirt in the form of protest, that is inappropriate. But the same people who are calling it inappropriate are sharing naked pictures of women taken without their consent. Thereâ€™s got to be something wrong with that logic, right?

If it means young women must take off their bras to be heard, so be it #VAWSCIPresser @zangazulugirl

We also need to change the stigma around violence

One social norm that we popularly ascribe to is the idea that there are certain places where women belong and where they don’t belong. So if a woman gets sexually assaulted when she is walking around at night, then she doesn’t have the right to complain because she wasnâ€™t supposed to be there.

People also need to realise that violence is not predominantly between strangers, but between people who know each other. It can be committed by your boyfriend, brother, father – anyone that you know and trust.

Violence is predominately between people that know each other. – Savera Kalideen #VAWSCIPresser

So where do we start changing things?

When parents discipline their children, it is a form of violence. Then, when they grow up, we ask, â€œhow could this person do this? They were raised so wellâ€. We need to find better ways to resolve conflicts than resorting to violence.

Okay, but surely itâ€™s not all parentsâ€™ fault? What about the schools we send our kids to?

The education system has been dropping the ball when it comes to this too. It needs a change up, especially in life orientation classrooms. In these classes, no one talks about consent. They only speak about STDs, STIs and HIV. As important as this education is, where are young men and women supposed to learn about the importance of consent?

Consent in my time was not taught in life orientation. Our education system is dropping the ball @tshepiso_29

And what about the government?

South Africa has no shortage of laws, institutions and acts that are in place to deal with violence against women. We have the constitution, the Domestic Violence Act and the amended Criminal Law (Sexual Offences and Related Matters) Amendment Act. The Sexual Offences Act was not actually budgeted for by government, and the panel recommended that more money be allocated to ensuring that these legal mechanisms work efficiently.

There is also the Commission for Gender Equality and the Department of Women, but they donâ€™t do enough. The panel recommended that government provides more support to women such as opening more Thuthuzela Care Centres and keeping them open 24 hours.