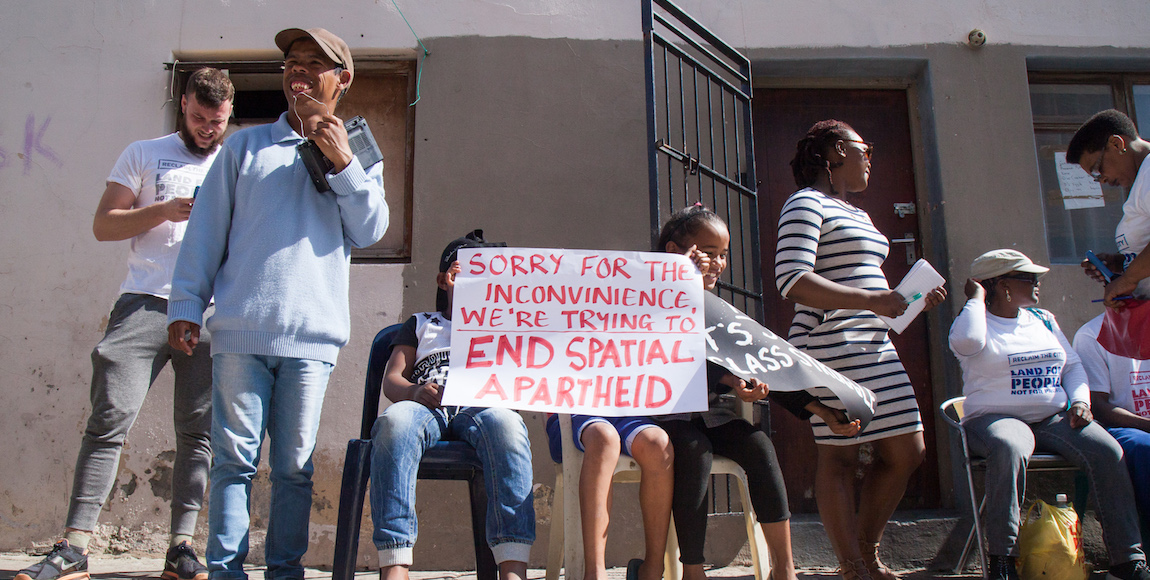 After months of pressure from housing activists, the City of Cape Town has identified 10 sites that will be developed in and near the Cape Town city centre for affordable housing.

â€œWe must acknowledge that, to date, our efforts to radically transform Cape Townâ€™s spatial reality to enable all of our residents to participate more equally in the local economy have fallen short,â€ Herron said.

The 10 sites are in the city centre and in the inner city suburbs of Woodstock and Salt River. Three of the sites have already been earmarked for social housing.

Two developments in Woodstock will provide about 240 residential units for rent to households who earn an income of less than R15 000 a month.

A third development will be in Salt Riverâ€™s Albert Road, where more than 10 families face eviction. The 476 units will be a mixture of social housing rental stock for families earning less than R15 000 a month and GAP housing (rental units for households that earn between R3 500 and R20 000 a month).

People will have to be on the Cityâ€™s housing database and pay rent to qualify for the Salt River and Woodstock units. The Salt River development will also include retail and office space, Herron said, to ensure that it retains financial stability.

â€œProviding affordable housing opportunities closer to where people work or close to public transport is non-negotiable. In this way, we will create a more integrated and inclusive city where residents have equal access to opportunities,â€ Herron said. â€œAs I have stated, where people live matters.â€

The City also announced that five additional parcels of land had been identified in Salt River and Woodstock for affordable housing, and that similar efforts were being made to find sites for low-cost housing in the northern suburbs of Belville and Goodwood, which each have their own city centres. Sites in southern suburbs such as Wynberg, Claremont and Plumstead are also being looked for housing opportunities, as well as Parow, Mitchellâ€™s Plain, and Khayelitsha.

â€œThe manner in which we are approaching these developments represents a 180-degree change in how we will confront the urgent demand for affordable and inclusionary housing in future,â€ Herron said.

The City of Cape Town has been heavily criticised by housing activists in pressure group Reclaim the City for failing to fulfil its commitment to provide housing in the inner city for the poor. The group, which has been praised for the Cityâ€™s latest announcement, has welcomed Herronâ€™s statement as a â€œwin for affordable housingâ€.

â€œThis is a victory for people who are being priced out of well-located areas or facing eviction. It shows the power that residents have when they organise together to resist injustice and demand change,â€ Reclaim the City said in a statement.

The group also said Herron should be â€œcommendedâ€ for â€œshowing the leadership this city requiresâ€. Reclaim the City has occupied buildings in Woodstock and Granger Bay, near the V&A Waterfront, to apply pressure on the City to develop social housing.

Activists have faced eviction from Woodstock, Salt River and Sea Point where rental prices have become exceedingly high in recent years. Last year members of Reclaim the City brought a court action against the City for offering Salt River evictees housing in a â€œrelocation campâ€ in Wolwerivier, 30km from the inner city .

The group says that it will remain cautious until the City shows that it will adhere to the timeframes and plans it has outlined for transitional and social housing developments.

â€œWe will resist to stay in our homes until we see bricks, front doors and keys,â€ Reclaim the City said.

Five of the 10 sites the City identified in the cite centre, Woodstock and Salt River will be released to the private sector, who will become partners with the City in social housing development. The prospectus for these five developments will be presented to the public in two months.

Herron said the City is also committed to providing temporary housing for people in the Woodstock area who have been evicted, which he hopes the city council will approve in a meeting on July 27.

Later this month, Herron is also expected to publish an inclusive housing policy, which will regulate the role of the private sector as partners in the development of affordable housing. Companies approved by the Social Housing Regulatory Authority and interested in partnering with the City have been asked to register on the Cityâ€™s social housing database by the end of July.

Featured image by Ashraf Hendricks/Ground Up