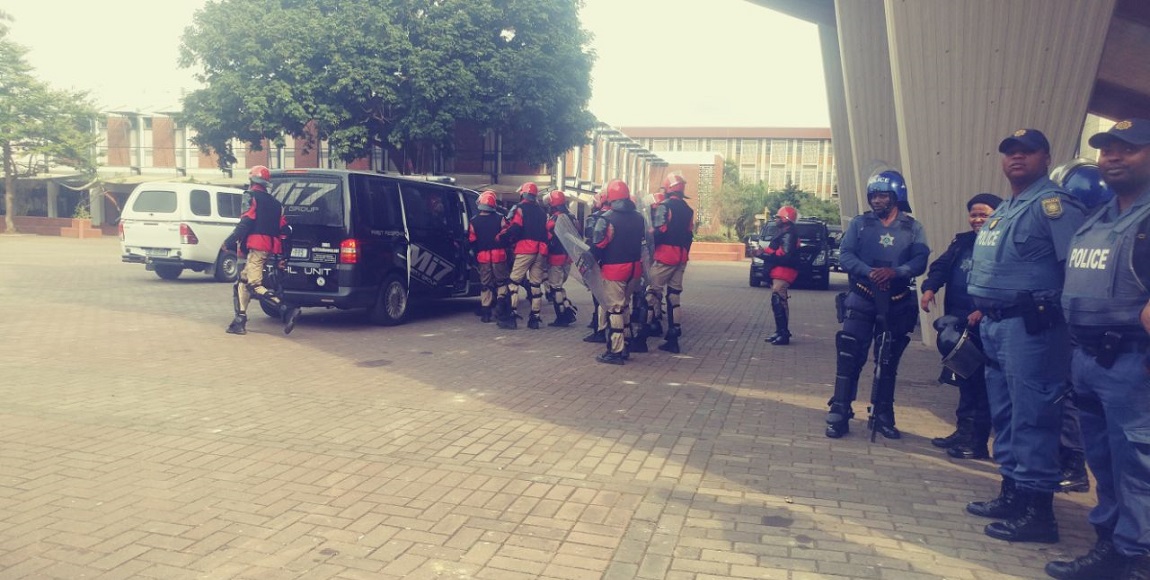 Seventeen students will appear in the Pinetown Magistrate’s Court on Tuesday following a violent protest at the University of KwaZulu-Natal (UKZN) Westville Campus on Monday. This after about three hundred students picketed and shutdown the campus over various grievances.

On Monday, police arrested seventeen students for public violence at UKZN following a large group of enraged students embarked on a protest which saw stones being hurled at police and rubber bullets flying.

According to the student representative council (SRC) president Fulufhelo T’tsi, the demonstration was prompted by numerous grievances including the academic exclusion of certain students.

“Students raised concerns with regard to poor maintenance in residences, poor WiFi connectivity in most off site residences, new SRC constitution as well as academic exclusion.”

“Exclusion policy has always been there in the university and it’s not the first time students are being excluded . The plea from students is that it is done away with as well as the review of the policy,” she said

On August 8 News 24 reported that the university had suspended academic programme following a violent confrontation between students and police.

KwaZulu-Natal police spokesperson Captain Nqobile Gwala confirmed the arrest of students and said they will be appearing in court soon.

“Seventeen students have been arrested for public violence after about three hundred students embarked on a violence protest that saw them hurling stones at the police, causing damage to the police vehicles in the process. They will be appearing in the Pinetown Magistrate’s Court soon,” she said.

The university sent out a communique informing students of yet another suspension of lectures until Tuesday 14 August.

In a statement, the university’s spokesperson Normah Zondo confirmed that academic programme was suspended.

“The Academic Programme, including all tests, have been suspended on the Westville campus for today, 13 August 2018 only. The suspension will allow University Management to engage with student leadership and find amicable solutions.”

“Three students have been arrested following violent protest action and the disruption of lectures on the campus this morning. Please note that the suspension is for the Westville campus only. The Academic Programme will resume on Tuesday, 14 August 2018,” said Zondo.

Meanwhile the University of Venda, Limpopo Campus resumed academic activities on Monday following a forced closure last week as a result of protests over NSFAS.