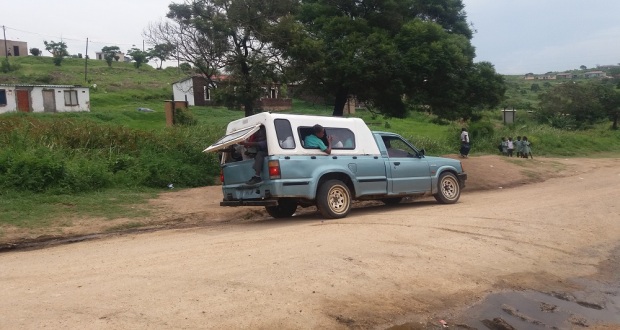 Bakkies perform the important function of getting children to and from school, but they are not a safe mode of transport for passengers. The Department of Transport is banning bakkies from carrying schoolchildren, but will this leave children and their parents stranded? The Daily Vox team explores.

Bakkies have been barred from conveying pupils to school after the national Department of Transport issued an amendment to the Road Traffic Regulations concerning the use of bakkies to ferry children to school.

Waiting at the road-side after school in uMgababa township, a number of young children run and hop into the back of a bakkie as umalume (the bakkie operator) opens the door for them to jump in. For them, a ride is a ride regardless of the mode of transport or its condition. In many townships, bakkies are the most common means of getting pupils to school, with parents paying a certain fee every month to use the transportation. Bakkies are not designed to transport children and passengers but this practice is common in Kwazulu Natal. In January 2015, six children died in Pietermaritzburg when a packed bakkie crashed into a house. The bakkie was reported to have carried 24 children.

A parent from uMgababa, Nomusa Memela, 29, says that, for years, bakkies have been the only option to get her children to school.

â€œMy children have been using a bakkie to get to school for the past three years. There was an incident last year where I received a call from umalume to go to the clinic where he had taken my son after he was pushed by another child out of a moving vehicle and fell off the road. Thatâ€™s when I realised that these bakkies were not safe but what can we do?â€ she tells The Daily Vox.

KwaZulu-Natal transport department spokesperson Kwanele Ncalane says, â€œWe have for a very long time been battling with the question of banning the use of bakkies in the province, primarily because the National Road Traffic Act is explicitly clear that the use of bakkies to transport pupils and people in particular for profit making is illegal.â€

However, Ncalane stresses that in other areas there are no regulated operating vehicles. He says that a lack of infrastructure in some rural areas and townships is holding back the introduction of a more reliable mode of transportation for pupils.

Bakkie owners make their livelihood by ferrying pupils to school, but they are aware of the consequences of getting caught transgressing the law. One owner, Mapuna Makhathini, says that they are aware of the departmentâ€™s concern and the penalties for the use of bakkies for transporting children and people.

â€œWe are aware of their concerns but the government will have to meet us halfway. This is our way of making a living and feed our families but if they decide to ban our cars, that would be killing us because we are the breadwinners and have children to send to school as well.â€

Makhathini adds that his bakkie ownersâ€™ association has a problem with a proposal to upgrade their vehicles to taxis.

â€œEven if we were to consider the departmentâ€™s concerns and integrate to taxi associations, the problem would be paying for those taxis unless we are met halfway in terms of paying those instalments. We are not against the idea of upgrading at all but not all of us can afford to buy taxis right away,â€ he says.

So what will happen to bakkie operators when the new transport regulations come into effect on 12 May 2017? According to the transport department’s Ncalane, â€œthere is a joint programme looking into the issue of integration of bakkies into taxis and find a way to absorb them to the mainstream of transportation.â€