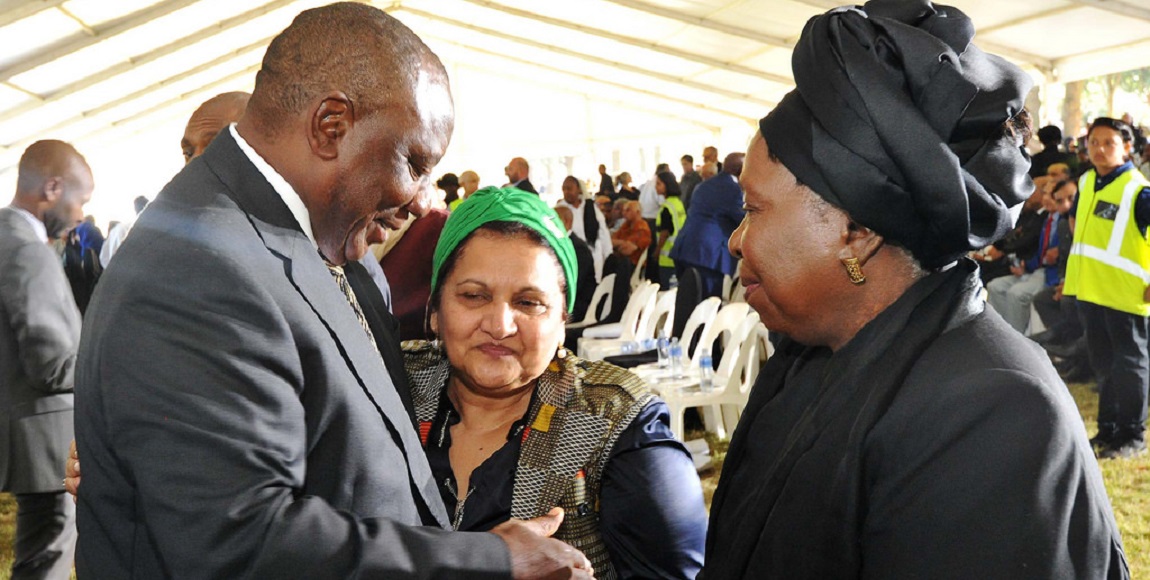 The race for president of the African National Congress (ANC), who will be announced at the partyâ€™s 54th national conference, currently stands between former cabinet minister Nkosazana Dlamini-Zuma and deputy president Cyril Ramaphosa. Both these candidates have been endorsed by several different bigwigs in the party, ANC leagues, business, unions, and media houses. The Daily Vox breaks down the endorsements for each candidate.

On Saturday night, the ANC national chairperson Baleka Mbete announced that she was ending her own campaign for the presidency and backing the apparent winning horse, Cyril Ramaphosa. Speaking to media at the conference, she said â€œWhat we are announcing is that we publicly endorse Cyril, that we have been talking and we agree on how to approach the issue of maximizing unity in the organisation in particular moving towards 2019 because it would be wrong for us to have a limited approach about what we have come to do here.â€

Human settlements minister Lindiwe Sisulu on Friday said she would stand as Ramaphosa’s deputy at the ANC elective conference, automatically dropping her candidacy for president of the party. This is in spite of the fact that Ramaphosaâ€™s stated preference for deputy is Naledi Pandor. On Friday, Sisulu half-jokingly told News24 that “I have had a conversation with Cyril, I am waiting for him to… go down on one knee and ask, ‘will you be my deputy?’â€

National executive committee (NEC) member and former police boss Bheki Cele has said that those branches from his home province KwaZulu-Natal that have nominated Ramaphosa have shown maturity for rising above tribal divisions.

Ramaphosa has also been endorsed by former treasury minister Pravin Gordhan who said in October that â€œThe Ramaphosa team must take over in Decemberâ€š and in January, they must tell Mr Zuma to go and live in Nkandla.â€

The Mail & Guardian reported that of the 1â€‰138 ANC branches out of a total of about 3â€‰800 branches, that had held their branch general meetings early November, 768 nominated Cyril Ramaphosa as ANC president.

Very unusually for what is essentially a party primary, global business publication The Economist, endorsed Ramaphosa in early December. The magazine went as far as calling him the hope not just of South Africa, but the entire continent.

The ANC nominations for Nkosazana Dlamini-Zuma

NDZâ€™s biggest support came from President Jacob Zuma in KZN in May this year.

Bathabile Dlamini, the social development minister and ANC womenâ€™s league president showed her supportÂ for Dlamini-Zuma and said she is the president of the ANC.

Free State Premier Ace Magashule has showed his support to Dlamini-Zuma and on Sunday said he was still confident in her chances of winning.

The ANC Womenâ€™s League endorsed Dlamini-Zuma, who was the only presidential hopeful to receive the full backing of the league .

ANC Veterans League said they wanted a woman as president and nominated both Sisulu and Dlamini-Zuma but seeing as Sisulu has dropped out the race, their support will go to Dlamini-Zuma.

The Mail and Guardian reportÂ that out of 1â€‰138 ANC delegates that had voted, 360 nominated Dlamini-Zuma.

The Sunday Independent published a front page endorsing Dlamini-Zuma on Sunday, the day the ANC presidential vote was set to happen.

I think the editor of the Sunday Independent wants Nkosazana Dlamini-Zuma to be President, although it is not very clear with this front page. pic.twitter.com/RrmKeOyiDg

Titled â€œDlamini-Zuma embodies hope for ANC and nationâ€. The comment piece by editor Steve Motale concludes: â€œthe Sunday Independent is therefore clear about endorsing Nkosazana Dlamini-Zuma as not only the correct candidate politically but morally.â€