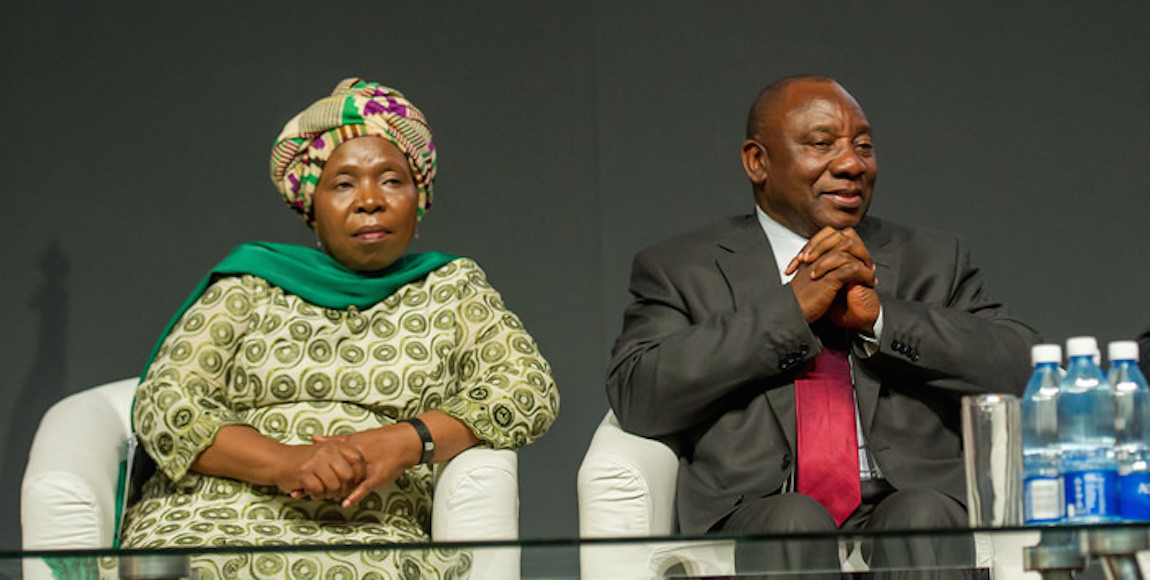 The two front-runners for incoming president of the African National Congress, Cyril Ramaphosa (CR17) and Nkosazana-Dlamini Zuma (NDZ), have outlined their policy positions should they be elected at the 54th ANC national conference. The Daily Vox gives an overview of what each policy position emphasizes based on what each candidate published.

Ramaphosaâ€™s policy proposal the â€œNew Deal for Jobs, Growth and Transformationâ€ outlines 10 points that are collectively about restoring economic stability and investor confidence to economy while simultaneously catering to job creation, transformation and tackling state capture and corruption.

The plan promises to clean up the mess thatâ€™s been created by President Jacob Zuma over the last eight years by proposing economic pragmatism and state efficiency which appeal to business and potential investors, while simultaneously paying heed to social programmes that appeal South Africaâ€™s working class and leftist blocs. If you were under the impression one could not simultaneously address to the elites of business whilst catering to the demands for economic redistribution – Ramaphosa assures us he can do all that and reverse the capture of the state. As The Economist endorsement piece on Ramaphosa seems to indicate, international business sees Ramaphosa as the saviour of South Africaâ€™s economy.

Most of the policies relating to job creation, making the economy more inclusive, improving infrastructure and economic growth through investing in small businesses are common-sense issues found in most South African policy positions. The New Deal follows the line of the National Development Plan and in many respects parallels policies proposed by the main opposition party, the Democratic Alliance.

Some of the highlights of the plan include a move towards increasing demand for local goods while diversifying exports – â€œlocal beneficiationâ€ – so as to increase production locally.

Ramaphosa also wants to clean up state owned enterprises by appointing boards of directors which are experienced, skilled and, most importantly, â€œincorruptibleâ€.

Ramaphosaâ€™s final point focusing on removing corrupt officials involved or complicit in state corruption. He proposes criminal action to be pursued where needed and wants to establish a special â€œanti-corruption appropriation fundâ€ through which all the recovered proceeds of corruption will be channeled to youth training and employment initiatives.

In comparison, NDZâ€™s plan for Radical Economic Transformation (RET) positions itself as a radical shift away from that status quo of South Africa – which is marked by poverty, unemployment, and inequality. It promises radical changes in order to redistribute wealth, land, and resources. NDZâ€™s plans drapes itself in socialist rhetoric. However, at least in terms of concrete proposals, RET comes across as more of a slogan than accurate description of what is tangibly being proposed.

While NDZ has been concerningly vague regarding nuances of what RET means – perhaps purposely so – there are a number of interesting points noted on her website.

NDZ calls for a fourth industrial revolution in conjunction with regional integration of Southern Africa as a whole. This revolution would include a move towards â€œsmart infrastructureâ€ and investing in the blue economy.

For those who have no idea what that is, the â€œblue economyâ€ refers to economic markets related to oceans and seas. NDZ proposes new investment to develop our blue economy, recognising South Africaâ€™s wealth of oceanic resources in terms of fishing, minerals, tourism, and – interestingly – the possibilities of deep sea oil extraction, much like theÂ Angolan oil industry.

In terms of education, NDZ says no child should be denied access to quality education at any level, simply because they are poor. Itâ€™s thus quite likely that she will endorse and rally behind President Zumaâ€™s recent announcement of free education for the poor.

On the land question, NDZ proposes an urgent national convention on land reform, aimed at resolving the land question sustainably while diversifying the agricultural sector, including for the development of agriculture in former Bantustan areas.

The policy position on this does not state land reclamation without compensation, but rather that agrarian reform must take into account the billions of rands spent on food imports to the country.

Overall, NDZâ€™s RET is hard-pressed to illustrate what precisely is radical about it. Most of it is centrist policies with no hard stances on social programmes that are strictly pro-poor. Even in terms of the land question, the proposal is a mere â€œconsultationâ€.

While there is a focus on reducing inequality and taking steps towards making the economy more inclusive, the concrete commitments, in terms of policy, seem no more pro-poor than Ramaphosaâ€™s. The key differences between them seems to be strategic focuses on which areas to develop within the economy, the sense of new discussion points in RET and itâ€™s appeal to youth interest in social justice. Perhaps the most glaring differences though, are Ramaphosaâ€™s strong stance on taking action on state capture – an issue which continues to mar whatever positive elements NDZâ€™s campaign may have for many in the public.