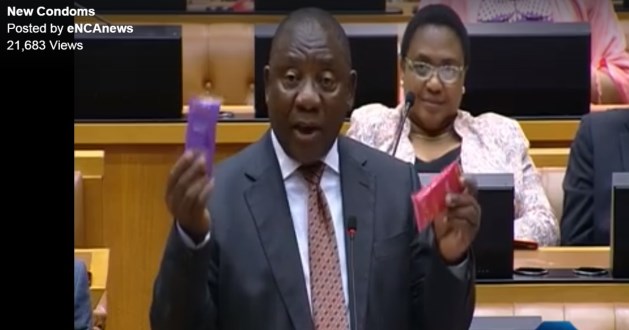 Speaking in the National Assembly on Thursday afternoon, deputy president Cyril Ramaphosa introduced a new range of government-sponsored condoms. Responding to popular demand, it’s larger (obvs), fruity flavoured (yum?) and noiseless (we don’t know either). Spare a thought for the almost-Tshwane mayor MP Thoko Didiza who appeared rather awkward during the deputy president’s endorsement of the new condom.

Fun fact: The South African government distributes over half a billion condoms per year, but research shows onlyÂ 36% of people actually use condoms.

But guys, what is this noise the other government condom makes?

UDM’s Filtane asks the Dep Pres, “who cares about noise during that time?”

The new condom is actually a project ofÂ the National Department of Health and was formally launched earlier this year, but have been availableÂ atÂ tertiary institutions and medical facilities since last year. The deputy president said the new condom was launched in response to research done on the government’s Choice-branded condoms.Â

Speaking to Cape Talk, Director at the Society for Family Health, Miriam Mhazo saidÂ that social perceptions around the Choice condoms were mixed, with many members of the public dissatisfied with the government-issued brand.

According to some research,Â Â South Africans were displeased with the scentÂ of Choice condoms and its branding. “It lacked the status… If you’re having a partner you wanted to impress, Choice was not the condom to take out of your pocket,” Mhazo said to Cape Talk.Â

Interesting that they are able to deliver flavored condoms but not free sanitary pads. Priorities on point there gov https://t.co/dD8O7a670O

Who says @MYANC does not address the hard issues? https://t.co/28iCGBt5du

Thanks for that. But when are we getting free pads, for maximum dignity? https://t.co/niyNFmo8Vp