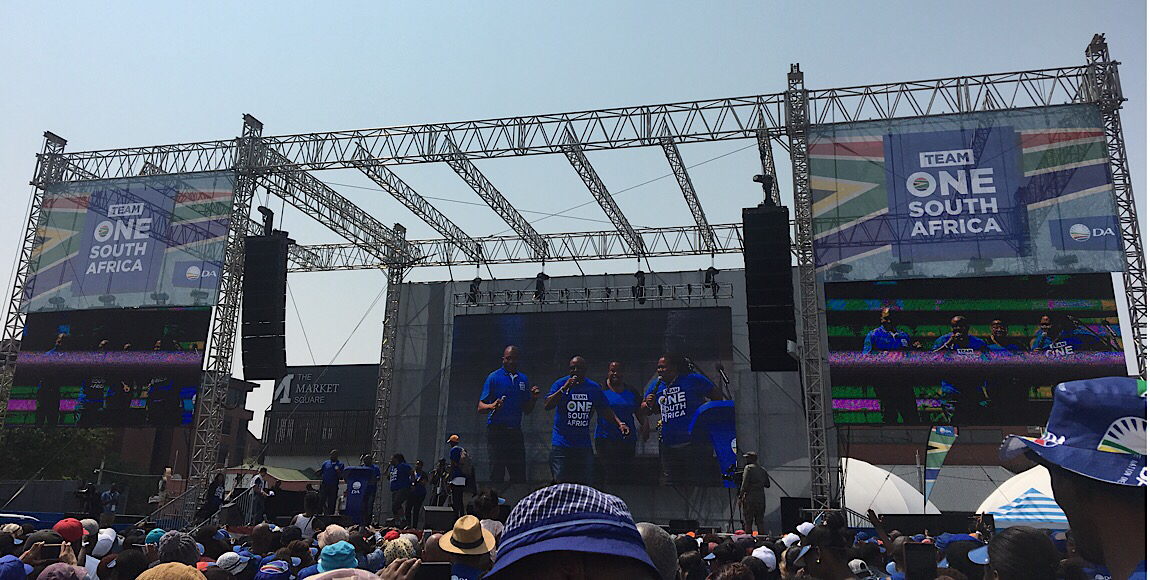 Change is coming to South Africa, that’s according to the Democratic Alliance. Led by federal leader Mmusi Maimane the main opposition party launched its 2019 National Elections Campaign in Johannesburg. the crowds was a sea of blue as Maimane invoked 1994 as a moment of hope. The Daily Vox team was there.

Proceedings in Newtown were due to start at 10. The programme kicked off with various South African artists getting the crowd ready for the main programme. From Shekhinah to Distruction Boyz, some of the best South African performers took to the stage at the launch.

Many of the DA t-shirt wearing supporters gathered said they were supporting the party and would be voting for them next because the party presented the biggest opportunity for change.

Before the main programme started, The DA’s Phumzile van Damme was in charge of a regalia competition where the best dressed DA supporters were judged.

After the performative section of the launch, the DA federal executive team to the stage. Maimane made his way to the stage through the crowds albeit separated from the crowd by a human barricade of security guards. He was presented on the stage as the next president of the Republic of South Africa.

Led by DA chairperson and recently ousted Nelson Mandela Bay mayor Athol Trollip, the DA 2019 Election team was presented. In Trollip’s speech, he said there are people who want to polarise us and that the DA wants to do something different which is one nation and one people. Trollip encouraged the crowd to work hard, love yourself and teach your kids that and promote the country.

Labeled the captains of Team One SA, the various premiers and heads of policy walked onto the stage carrying flags like at the Olympics.

The biggest cheers by far for any of the provincial candidates was given to the Tshwane mayor Solly Msimang.

Starting his speech with “My fellow South Africans’, Maimane said that with the celebration of Heritage Day, it’s a day to pause and reflect on the history that shaped us into the nation we are.”

“They tried to tell us that our skin colours, our languages, our cultures and our religions were things that should divide us. But they couldn’t be more wrong. Our diversity is precisely what makes us strong. Our future lies together. Never let anyone tell you otherwise.” He said

Maimane waxed nostalgic when he spoke about 1994 and the excitement and hope he remembered from that time .

Seeming to try and reiterate that the party do not share a certain Western Cape Premier’s viewers, Maimane said: “Fellow South Africans, what happened here during the years of Apartheid and colonial rule left deep, deep wounds in our society […] The injustice then remains an injustice now. The inequality then remains an inequality now,”

Maimane went through all the problems that face South Africa at the moment from crime, corruption and gender based violence. He said the country has a government that does not serve the people.

“The only way we will achieve this is if we’re completely honest about how we got here. And I’ll tell you right now how this happened. It is complacency that got us here. This government realised it didn’t have to work for the people to still be voted into office.”

“Today marks the start of the DA’s Election 2019 campaign. And from now until we go to the polls, my colleagues and I will spend every single day telling South Africans what they can expect from a DA government. It’s a simple message: The DA will bring change that builds One South Africa for All,”

He then laid out the various policies of the party to deal with service delivery, the land question, immigration and more. There were a lot of talk about the existing problems which exist in something. However Maimane’s plans were a little thin on details about how the party would go about carrying out these goals.

Maimane said Team SA is not just for DA leaders and DA members. But rather it is for “every single South African who wants to join us in building the country of our dreams, no matter how big or small their contribution,”

An advertisement that has been created for the campaign was shown when Maimane completed his speech. He then had the crowds hold hands with the people next to them saying that Change is coming.