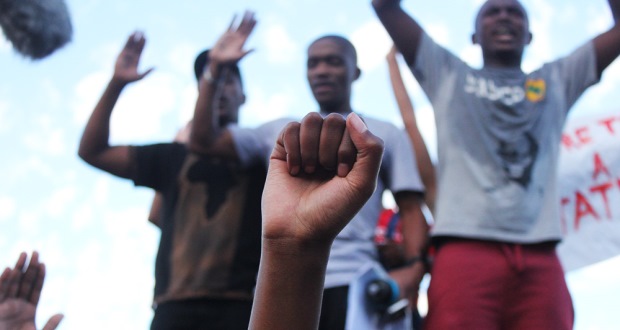 The University of Witwatersrand will reopen on Monday 10 October, amidst moreÂ security, and a continuing impasse betweenÂ students and management.Â Wits academicÂ DANAI MUPOTSA is saying a prayer.Â

This describes the time/place of the present, where the demands of the past and future come to collide on the question of higher education. Disappointment describes that feeling in your heart made only possible by the hope and risk you have taken in believing in something, like faith, hope, magic or justice.

Disappointment describes what it means to will and want something. Sometimes it is as simple as wanting someone to hold your hand and they wonâ€™t, because the risk of wanting something like this hurts a lot. We have been made unused to holding each other boldly.

Disappointment is a luxury on the question of the university because it is a standpoint that wants us to assume that the idea of the University was not founded on exclusion, hierarchy, patriarchy, racism, injustice.

Disappointment is a luxury on the question of the university because it is a standpoint that wants us to assume that we can continue to act surprised to discover that this place is the safest haven for shallow measures of excellence. It is no wonder that some people breathe easily with the idea of privatising the university, extending its surface as the scene or site for the reproduction of mediocre elites.

Disappointment describes my refusal of cheap sentiment at the cost of deep justice.

When I was in primary school we had a subject called â€œGeneralâ€. Perhaps this subject served as a foundation in what would later become Geography and History, or more broadly the Humanities or Social Sciences. It was in this course that we would learn concepts like the GDP, the Gross Domestic Product, which tells us how â€œhealthyâ€ a countryâ€™s economy is â€“ and the Gini Coefficient, which gives us a ratio that helps us to understand how unequal a society is.

We live in a country which is very very unequal.

We have a small (I mean BIG) distribution problem.

Basic education is a strong example. We can also refer to the provision of healthcare facilities, clean water and sanitation, housing and transportation as other examples.

Many of these basic goods â€“ we have become accustomed to accessing privately. We breathe easily with the idea that these goods are made/meant for profit. The assumption being perhaps that these are no longer public goods that should be defended as such.

This injustice rests itself boldly on structural arrangements founded in violent and continuous dispossessions, slavery, the exploitation of workers, and the disappointing attachment to the present as progress.

This injustice as a resting pose, or assumption makes it possible for theÂ chief executive officer of Shoprite â€œWhiteyâ€ Basson to earn a nearly-100 million rand bonus, when workers at the chain of supermarkets make as little as R1,500 a month. Many people read that and donâ€™t blink an eye.

Injustice is so ordinary. It is often what our sense of love, care, sentiment, attachment and entitlement rests on.

This injustice rests itself boldly on structural arrangements that aim to convince us that in the present our differences are purely descriptive and something we celebrate as â€œheritageâ€ â€“ let us not talk of inheritance. Those who want to marry the questions of difference with justice and disappointment come to spoil the party.

In the past two years, I have heard colleagues in and outside of the Faculty of Humanities refer to the Humanities as a place that does not produce particular kinds of value. For example, the claim that the Faculty of Health Sciences produces doctors who presumably heal people (in our collapsing public health system, or in the profitable private sector).

Often what is coded in these articulations is the direct line between value and profit. That is that value is profit.

Yet, rather ironically, what is also coded in these articulations is a claim around justice.

That is, that value as profit gets wrapped around sentimental claims that “real people” stand the chance for uplift.

In the Humanities, we too follow with this model. These are private/profit universities after all.

This injustice rests itself boldly on conservative intellectual projects and programs that sell crisis, action, politics — justice for profit.

I like the idea of living with purpose. Purpose one, I am a parent to the most brilliant and beautiful child. Her questions quicken my mind and her heart thickens my compassion.

Purpose two, I am a teacher.

It is with deep care and compassion that I choose the refusal to reduce our students to caricature or singularity.

It is also willfulness that I read in their negotiations.

We are all too used to and complicit with disappointment.

What I learn as a teacher in this place is this kind of love. The kind where you laugh where it hurts. Where you love boldly when you are tired. When you find moments still to read and think about that essay, while practicing your squats for when the teargas and stun grenades are hurtling your way.

I refuse the idea that we are called as teachers to practice the reduction of our students to the sort of singularities and caricature that currently circulates in public sentiment.

I also refuse the reduction of the place of the teacher to a callous technicality. This is sacred work that we must defend.

University management at the University of the Witwatersrand and student leaders have been working with a mediation team to come to an agreement on Free Decolonised Education. This negotiation came to an impasse when the General Assembly was cancelled. Students would hold their own assembly instead. University management would announce that classes would resume on Monday morning, outlining a list of rules to enforce this process.

I am not a fan of progress time. Itâ€™s proved densely disappointing. So when I pray for time, please try to understand me.

I pray for the kind of time that in technical terms, extends the mediation process so we can come together to have difficult conversations â€“ where we disagree boldly and risk for hope nonetheless.

This cannot be possible when security forces are on campus enforcing a reopening that will most certainly reinforce a shutdown, where people are going to get hurt or worse.

I was there on Tuesday; it was awful.

The claim that we are losing time in the academic program, so time must be forced like this only works on the assumption that we accept that the security forces will succeed in enforcing this reopening.

I pray for time.