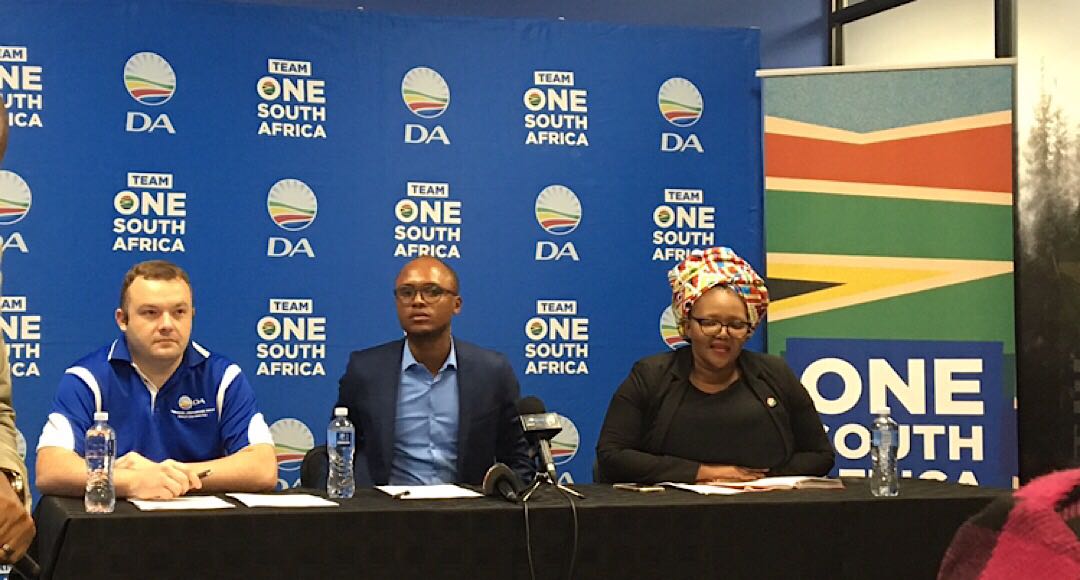 The Democratic Alliance (DA) and the Economic Freedom Fighters (EFF) are both eager to show they are ready for the 2019 National Election. They briefed media on two consecutive days about their progress with less than a month until May 8. On April 11, the DA spokespersons addressed media.

Addressing media was the DA’s national spokesperson Solly Malatsi, campaign manager Jonathan Moakes and executive director of communications Siviwe Gwarube. They shared how their campaign is going so far and as well as their focus areas for the next 27 days.

According to the party their internal polling has showed them that the African National Congress (ANC) is at its weakest with the DA at its strongest. When asked to reveal the exact numbers from their polls, Moakes said they couldn’t reveal it as it is kept confidential. He only said their internal numbers show that the ANC is weak in the Gauteng with victory certain for his party. “We are also strong in the Northern Cape,” Moakes added. (This wouldn’t be the first time that the official opposition has made this claim on the basis of secret, internal polling – ed.)

Malatsi said: “The Democratic Alliance is firmly on track to achieve its objectives of retaining the Western Cape, bringing the ANC below 50% in both Gauteng and the Northern Cape and growing across the length and breadth of the country.”

During the EFF’s press briefing on April 10, leader Julius Malema said the DA’s attacks on their party would be a deterrent to forming coalitions after May 8. Responding to a question from The Daily Vox about their response to this: Malatsi said: “We are in it to win it (the election). We are focused on winning and becoming the largest party.” He added that they were not thinking of coalitions at the point.

“There are no background talks about considerations for coalitions… any potential discussion about that will have to take place after the election,” Malatsi said.

Commenting on the #AlexShutdown, the party maintained that the protests are ANC-initiated. They claim they are in possession of evidence that the head of the ANC Election Campaign Fikile Mbaulula is involved. Moakes said Mbaulula is leading a team of Bell Pottinger-inspired bots which is causing the violence.

“The people have legitimate concerns but what is currently happening is the ANC,” said Gwarube adding that the party would not be pandering to the political actions of the ANC. During the EFF’s press conference, Malema echoed those sentiments blaming the violence and the current bad service delivery in Alex on the ANC.

The DA has a busy calendar of events in the last few weeks of the election. They will be leading a Freedom Day event in Johannesburg and a Worker’s Day rally in the Western Cape. They will end their election campaign events on May 4 during a Phetogo – We Can Win Rally at Dobsonville Stadium.