Home Uncategorized What you didn’t know about the #StateCaptureReport and were too afraid to...
WhatsApp
Facebook
Twitter
Email
Print 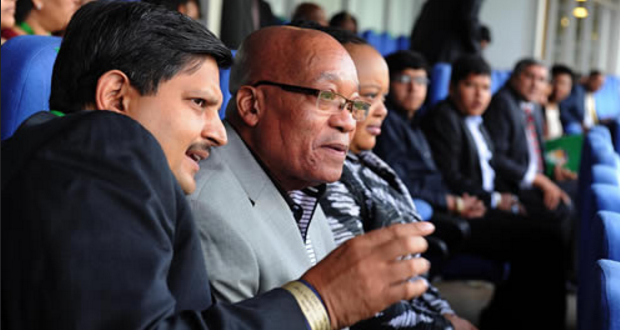 Thuli Madonsela’s 355-page State Capture Report finally went public on Wednesday afternoon, about two weeks after Madonsela’s term as Public Protector ended. Earlier on Wednesday, Zuma withdrew the application he had made just a day before, asking the court to find that Madonsela acted unlawfully in finalising the report.

But what exactly is this whole state capture thing about, and what does it mean for the country, going forward? We break it all down below.

What is state capture in the first place?

According to the World Bank, “state capture” refers to “efforts to shape the laws, policies, and regulations of the state to their own advantage by providing illicit private gains to public officials.”

State capture is a form of corruption on a massive scale, and in this particular instance the president allowed the wealthy Gupta family to intervene in many high-impact governmental decisions.

Simply put – the Guptas have been using the state to get ahead in life.

This influence may be through state institutions, such as the Gupta-owned company Tegeta which is alleged to have unduly benefited from its owner’s relationship with Eskom CEO Brian Molefe. But, this would be through inconspicuousÂ channels, which may not necessarily be illegal.

Why was Thuli investigating state capture? Who reported it and why?

First, the Dominican Order of Southern Africa approached Madonsela’s office to request that she investigate the extent to which the Guptas were interfering with the state. They also requested that Madonsela investigate whether the Guptas knew in advance that the cabinet reshuffle around the finance minister was going to take place in December 2015.

On 18 March, Democratic Alliance (DA) leader Mmusi Maimane then lodged a complaint asking Madonsela to investigate whether President Zuma had violated the Executive Members Ethics Act (EMEA). In a statement, the party asked Madonsela to probe whether the president violated the Act by “exposing himself to any situation involving the risk of a conflict between his official responsibilities and his private interests – using his position or any information entrusted to him to enrich himself or improperly benefit any other person and – acting in a way that may compromise the credibility or integrity of his office or of the government.”

While she still had to do a preliminary assessment into the Dominican Order’s complaint, Madonsela had no choice when it came to the DA’s complaint because it was lodged under the EMEA, which instructs the Public ProtectorÂ to investigate and report back to the president.

Who are the Guptas anyway, and do they even go here anymore?

The three Gupta brothers, Ajay, Atul and Rajesh, started their pursuits in South Africa in 1993 to take advantage of a transforming business space.

Ajay was the first to set up business in Egoli, running a shoe business – which failed – but he struck success with the computer business, Sahara (named for Saharanpur in India, where they hail from). The rest of the family joined him and over the years they expanded their empire to mining, media, technology, engineering, and Oakbay, their investment company.

They gained deals through shady transactions and have been closely linked to Zuma since before he became No.1.

The Guptas are reported to have left the country but lived with their families and ran their businesses from their compound in Saxonwold. We’re wondering why a whole pyrotechnic spectacular took place at their compound for Diwali if they weren’t in the country?

The Guptas earned South Africa’s attention in 2013 when a whole jet transporting 217 foreign guests into the country landed at Waterkloof Air Force base, outside Pretoria which is used to receive heads of state. On that occasion, the Gupta family was allowed to use it to bring in people for a family wedding.

Investigations into the Guptas’ dealings with the government began in 2011 after Cosatu called for them to be investigated. Since then, they’ve become infamous, allegedly rolling with tog bags bulging with so much cash that they needed to be kept closed with cable ties.

So were our state-owned enterprises also captured?

Five state-owned enterprises were named (Eskom, Transnet, Denel, SAA and SABC) in the report, but Madonsela was only able to make findings on Eskom. This was mostly because she ran out of time and resources, though.

Madonsela found that Tegeta has been supplying coal to Eskom at almost double the amount it is usually sold for. The six-month contract at one plant is worth a heftyÂ R700 million. This allegedly contravenes the Eskom boardâ€™s duty to prevent fruitless and wasteful expenditure.

The report also found that the board of Eskom appears to have been improperly appointed. The process was allegedly not in line with the standards of good corporate governance.*cough SABC cough*

So will Zuma be packing his bags anytime soon?

De Vos noted that Zuma’s guilty of breaching the Executive Ethics Code and faces allegations of breaking the Prevention and Combatting of Corrupt Activities Act – the latter, on two grounds.

In terms of the breach of the Ethics Code, which is part of the EMEA, Zuma has broken it before. More worryingly, the EMEA, as it stands, stipulates that any action taken for breaching the code is decided by – wait for it – the President. Yes, Zuma decides his own consequences. #MustBeNice.

On the allegations of breaking the Corruption Act, de Vos expressed that there is not strong evidence that Zuma used his position to give somebody benefits. However, the second allegation of Zuma being aware of corrupt activity and not reporting it, is indeed a criminal charge that could stick.

But here’s the catch: the folks who investigate such corruption, the Corruption Fighting Unit, are the Hawks. Once the Hawks have investigated the charges, they submit the findings to the National Prosecuting Authority (NPA), headed by Shaun Abrahams.

Given that both the HawksÂ and Abrahams are said to be in Zuma’s back pocket – it’s doubtful whether any significant outcomes will follow.

But given that Parliament’s actions are largely politically – and not legally – based, it’s unclear how successful this vote will be. The ANC still has a pretty significant majority in Parliament, so it might really depend, as De Vos noted, on internal ANC politics and how they feel about their controversial leader.

So, what happens now?

Madonsela has recommended that President Zuma appoint a commission of inquiry within 30 days, which will be headed by a single judge, who must be appointed by Chief Justice Mogoeng Mogoeng. This judge will then put together their own team for the commission and it will be funded by the National Treasury.

In order for this commission to investigate thoroughly, the commission will be given all the powers of evidence collection equal to, or greater than, that of the Public Protector. So basically, they’re allowed to go full CIA on Zuma’s ass. Okay… maybe not, but it might be fun to watch, right?

So the commission has six months to submit its findings and recommendations to the president. Then he has 14 days to hand a copy of it, along with his plans to implement it, to Parliament.

Madonsela has also recommended that the EMEA be reviewed by Parliament. It sets out the regulations for the Executive Ethics Code of conduct for Cabinet members and members of provincial executive councils. Madonsela wants Parliament to “provide better guidance regarding integrity, including avoidance and management of conflict of interest” in the EMEA. Madonsela’s BEEN dissatisfied with the EMEA – she asked for it to be amendedÂ a few years ago because it allows the president to decide the consequences of breaching the code of conduct.

She also added that the review needs to give more clarity on how these officials are allowed to respond, and take action against, people who expose government’s alleged dodgy dealings. It wouldn’t be cool if whistleblowers aren’t willing to come forward for fear of being sued – like the Snowden case. The president is also recommended to ensure that the Executive Ethics Code is updated to be in line with the reviewed EMEA.