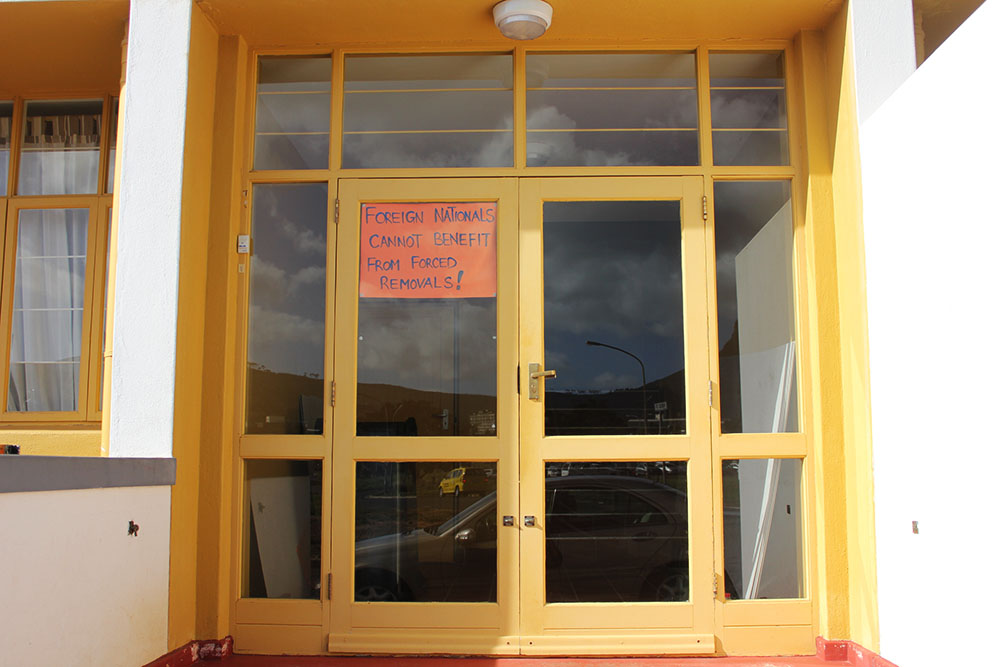 More than 1,000 families are still awaiting compensation for homes they lost in the District Six forced removals. Decades have passed since the first land claims were made, and frustration has brimmed in a community fearful of gentrification, and unwelcome to anyone deemed an outsider, to the extent that three Rwandans have been forced to move out for fear of their safety. RA’EESA PATHER reports.

The moment he stepped into the pristine white block of flats in the middle of District Six, Omar Ngeze* was in trouble.

“On the first day that we came to view the house, the people were saying ‘you cannot live there’,” Ngeze, a Rwandan national, told the Daily Vox. “They say, ‘there’s no black person that can live in District Six’.”

Ngeze has lived in South Africa for 15 years, recently acquiring his permanent residence, and earning his living behind his steering wheel as a taxi driver for Uber. Along with his cousin and brother, Ngeze risked moving into a flat in the building where he was unwanted on 18 May, reassured by the flat’s beneficiary and the letting agent that everything would be okay. But residents in the community told him to leave.

“They say it’s about the constitution and we don’t know anything about how this thing [District Six] started,” Ngeze says. “They say we better move out because we don’t know their struggle to get those houses.”

A few days later, Ngeze and his family came home to find the lock had been changed on the main entrance, preventing them from entering the building. A poster on the door read: “Foreigners out of District Six.”

Ngeze has since left the flat, moving back into his mother’s home in Woodstock. His work hours mean that he often comes home late, and he’s fearful that as he walks to his flat in the darkness of the night, someone will attack him.

“Every time when we coming back, people are looking at us from the windows like we are skollies. When we leave in the morning, they are looking at us. That’s why we told the owner, we cannot live this kind of life,” he says.

His lease was only for one year. Now, Ngeze is caught in no-man’s-land: his landlord wants him to stay and the letting agent refuses to return the R21,000 he paid as a down payment.

The people waiting to come back
Asa Salie lives around the corner from Ngeze’s former complex. The 63-year-old District Six resident was forcibly removed under apartheid but happily returned to her home in 2012.

Many of her loved ones, however, have yet to be compensated, and she says they are now struggling, cautiously trying to survive under the barrage of gang violence in Hanover Park and Manenberg. But they want to come back home.

“They are hopeful that it’s going to happen, but at the rate the government is building, I can’t see that happening in the next 10 years,” Salie told the Daily Vox.

A year ago, Salie called the flat owner at Reform Street to ask if her niece – a land claimant – could rent his empty flat. The beneficiary turned her down, but three weeks ago she noticed a signboard go up, notifying people the place was to let. She angrily called him.

“I phoned Mr Bawa* three weeks before they moved in and I said, “Mr Bawa, it’s not going to look good, because I’m telling you now, we’re going to let the media know what’s going on’,” she says.

Salie has been disappointed by the government’s failure to return District Six to the vibrant hub she remembers. President Zuma had promised that by February 2014 restitution would finally come to all who had lived in District Six. Instead, the February deadline came and went, and later that year reports emerged that student housing for the Cape Peninsula University of Technology was being built on District Six land.

“I’m 63; there is people who could be my mother, who is waiting to come back,” Salie says. “I can call myself damn lucky that I’m back, because I cannot see them building in time for those old people still to enjoy being back in the place that they were bulldozed out of.”

Since the first land claims in 1995, 139 families have returned to District Six and 1,351 have received financial compensation. There are still 1, 150 families waiting for their suffering to be acknowledged.

The slow pace of development has led Salie to question if the government ever intended that District Six’s people to come back home. She now believes a process of gentrification is unfolding, where people forcibly removed to the gang-riddled Cape Flats are no longer desired in an area so close to the auspicious core of the inner city.

Unsuccessful in her attempt to engage with government, Salie’s frustrations have now been directed at Ngeze, his former landlord, and anyone else who rents out their home before all who wish to come back have returned.

“How can you rent a place to a person – it doesn’t matter whether they are from Cape Town or from Timbuktu. If you didn’t feel the pain of being oppressed and being moved from District Six, then why should you be back?” Salie says.

Government’s response
Michael Worsnip, the chief director of Restitution Support for the Land Claims Commissioner, told The Daily Vox, that the only restrictions on land claimants who have their property are city by-laws and that they cannot sell the property within 10 years of receiving it.

“Once a house has been handed over to a claimant, it becomes their property – to do with as they please. If they wish to rent it out, they may do so,” Worsnip said. “Other claimants have no rights whatsoever over the property.”

Worsnip says that the government failed to deliver to all land claimants by February 2014 because Phase 3 of the housing process will only be complete in 2016. Some late claimants – those who claim after 1998 – also only lodged their claims in July 2014. Worsnip maintains, however, that the priority is on those who have waited 20 years for a response to their claims.

“It is the intention of all parties to ensure that all the claims lodged prior to 1998 are settled first, but this needs to be in the context of an holistic framework for the full development of the site,” Worsnip said.

In the meantime, about 50 community members in District Six have drawn up a mandate requesting that government no longer allow beneficiaries or claimants to rent out their property until restitution has been completed.

Although Ngeze has enjoyed South Africa for the past 14 years, his short-lived experience in District Six has left him shaken.

“I don’t see any democracy around here,” he says. “We will be victim for something that we don’t know how it started.”