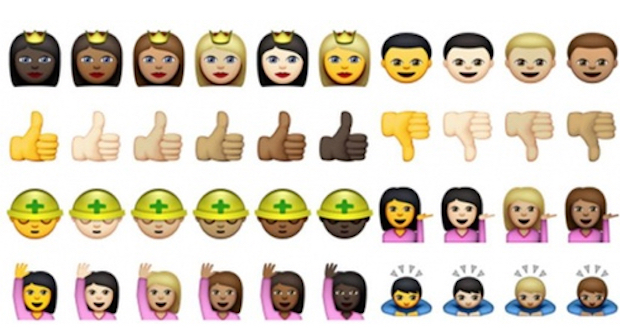 After years ofÂ complaints aboutÂ the lack of diversity in emojis (those funny icons you pepper your text messages and emails) Apple is finally making it a reality. The tech giant this week announced that its upcoming mobile operating system, iOS8.3, which is scheduled for release later this year, will have 300 new emojis, and will reflect a diversity of people.

The operating system will feature emojis in different shades of colour to depict people of different races. There are also LGBTQI-friendly emojis, with same-sex families featuring among the options.

There are now also more flags than than were previously available,Â however, the South African flag is the only African flag featured. Yay for us! But what about the other 54 countries on this continent?

Apple may be at the epicentre of the racially diverse emojis, but they are not the first. In April last year, Mauritius-based tech company Oju Africa released a range of afrocentric emojis. The company already has 65 ethnic character emoticonsÂ representingÂ black people.

http://t.co/wDSYSzdGyS I bet many of you didn’t know that afro centric emojis had already existed.. pic.twitter.com/50g53XVhXb

Oju Africaâ€™s Ugandan-born CEO Alpesh Patel, said that Apple had missed the whole point about having racially diverse emojis options, and highlighted that there is more to diversity than changing skin colour. â€œDiversity is not about skin colour â€” itâ€™s about embracing the multiple cultures out there that have no digital representation,â€ Patel said. AppleÂ has previously come under fire for its bright yellow emojis which, have been assumed to represent Asian people. Many people have called it a racist representation of Asian people.

But the designers behind the emoji have said that the bright yellow is not meant to represent a skin tone, but to be the default emoji colour which you select and then tap to get the skin tone you want.

Although many people have welcomed Appleâ€™s emojis, others have pointed out that they should implement their diversity beyond the keyboard and inside Silicon Valley itself.

@Zuluking709 For me, Apple diversifying its app developers to include more black app developers is important than these lousy Emojis. â€” . (@Mr_Mpangase) February 26, 2015

The (lack of) diversity inÂ Silicon ValleyÂ came intoÂ the spotlight recently whenÂ various technology companies, Apple included, were forced to come clean about their diversity. Apple US officeâ€™s report indicated that 55% of its employees were white; with 15% Asian, 11% Hispanic, 7% Black, 2% bi- or multi-racial, 1% other and 9% undeclared.