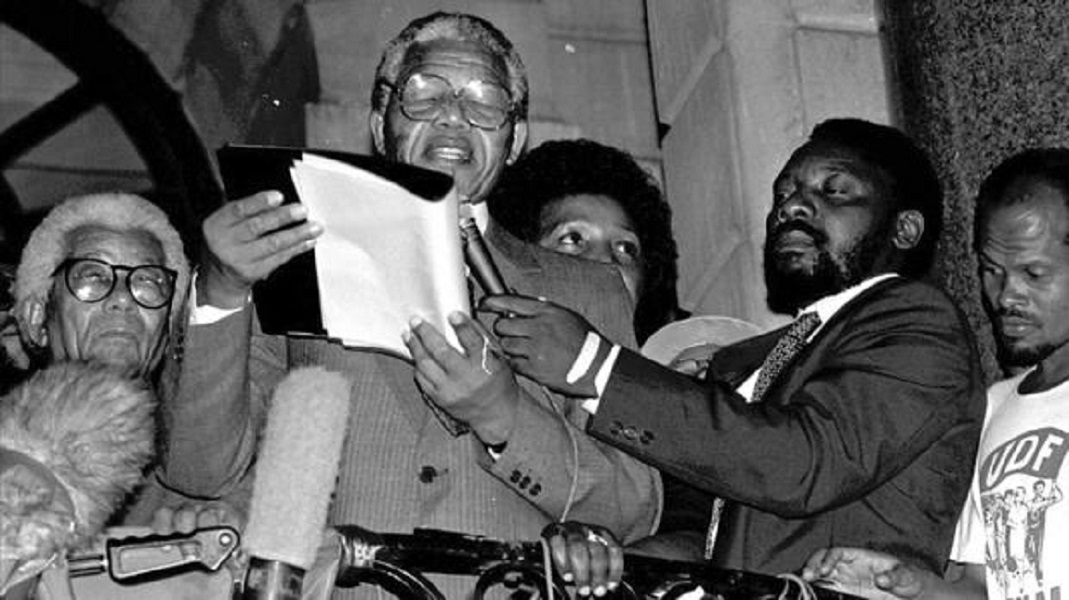 Matamela Cyril Ramaphosa was supposed to be Nelson Mandela’s successor. Now finally at 65, ‘Mandela’s heir’ is the new president of South Africa. But is the Ramaphosa of 2018 the same person that Madiba held in such regard? SHAAZIA EBRAHIM and FATIMA MOOSA take a further look.

Nobody can argue that Ramaphosa has struggle credentials. He was a student activist and studied law, and then joined the Council of Unions of South Africa (Cusa) as an legal advisor. Ramaphosa was arrested and spent 11 months in solitary confinement for supporting the Mozambican liberation movement, Frelimo. After studying, he turned to trade unionism – a legal way of protesting the apartheid regime. When Cusa became the National Union of Mineworkers (NUM) in August of 1982, Ramaphosa became its first secretary. Ramaphosa was involved in the formation of the Congress of South African Trade Union (COSATU).

Ramaphosa played an integral role in the transition to democracy. The image of Ramaphosa holding the microphone for Nelson Mandela upon his release from Robben Island has become iconic.

Mandela described Ramaphosa as one of the most gifted leaders of the “new generation” – the young campaigners of the 1970s who filled the void left by their jailed elders.

Tasneem Essop, political researcher at the Society, Work and Development Institute (SWOP) said to The Daily Vox many people see Ramaphosa’s ascension to the presidency as Mandela’s wish coming to fruition. But it’s important not to see Ramaphosa through a rose-tinted lens.

“Mandela is long gone – for better or for worse – and we still need to keep in mind the many positives of his vision[…] But to use that to bolster Ramaphosa in 2018 is a stretch,” Essop said.

Essop said we need to praise or critique Ramaphosa as a politician, to see him as ‘Mandela’s’ vision which has been tied up in romantic narratives of the country would be flawed.

Ramaphosa rose to global prominence in the 90s as the ANC’s lead negotiator during Convention for a Democratic South Africa (Codesa) and the constitution.

During the ANC’s first elective conference before the ’94 elections, was elected secretary-general, and not deputy president. He was (apparently) so bitter about this that he skipped Mandela’s 1994 inauguration.

After that, Ramaphosa faded out of the political spotlight for a while. In 1997 he founded an investment company with shares significantly in platinum mines operated by Lonmin. And this was the beginning of his involvement in big business.

How did a trade unionist shift from leftist politics to neoliberal capitalism and big business?

“He has his own individual story which has to do with factional politics in the ANC and where the ANC has been positioning himself. We can wonder how a union leader turns big business turn state president,” Essop said. But Ramaphosa’s story is not removed from the politics of the ANC or the ANC post-1994 who moved from socialist rhetoric to neoliberal policy.

In August 2012, Lonmin dealt with an unprotected strike which escalated with the Marikana Massacre and the death of 34 miners at the hands of the police. In December 2012 Ramaphosa was elected as deputy president and in February 2013 resigned from his position at Lonmin. In 2015, the Marikana Commission of Inquiry cleared Ramaphosa of any responsibility. But he had a hand in it.

Ramaphosa infamously described the striking workers as criminals and called for “concomitant action” to be taken against them in emails sent to the ministry of the police. National chairperson of the EFF and lawyer to the miners Dali Mpofu argued that the emails were evidence of “concerted pressure” placed on the police and government to criminalise the strike action to create a “platform from which it would be easier to inflict violence on strikers.”

Mpofu said Ramaphosa’s intervention “triggered a series of events which determined the timing of the massacre. He knew exactly what he was doing and he is the cause of the Marikana massacre.” Ramaphosa argued that he had not anticipated that the police would shoot the strikers, and wholeheartedly condemned the action.

Ramaphosa, the unionist and SG of NUM who striked alongside miners in the 80s and 90s, called for the mines to be closed down to prevent violence against the striking workers. But Ramaphosa the businessman during the 2012 strike, pushed for a larger police deployment instead of negotiations.

We cannot forget that Ramaphosa was the head of the transformation committee at Lonmin. He was responsible to transform the apartheid-like conditions that the miners lived in, which were part of the reason why they downed tools. The Farlam Commission found the strike happened in part as a result of the despicable housing conditions of the workers. That was part of Ramaphosa’s remit. When he testified before the commission, Ramaphosa said he wasn’t aware that the plans to build more houses were not met and had delegated someone else to deal with it.

He never visited Marikana to formally apologise for his role in the massacre. His apologies have been to the media and to his fellow ANC members. Forget apologising, he has not even attempted to ensure the improvement of the lives of the people of Marikana. The families of the slain miners as well as many other families continue to live in abject poverty and suffering.

Thirty-four people were killed in what has been labelled the worst mass shooting of civilians by police since the end of apartheid. It is a shame on our democracy, government, and police. Who were the victims of the violence? Black, worker bodies have never mattered in South African history and still don’t matter 24 years into our democracy.

And then there’s Ramaphosa’s dodgy stance on Fezekile Kuzwayo – or Khwezi as she became known. Kuzwayo – who passed away in 2016 – was the daughter of an ANC struggle veteran. Kuzwayo accused Zuma of raping her in 2005 and faced an arduous trial. No ANC politicians supported her, forcing her to flee to The Netherlands when Zuma was acquitted of the charge.

On Karima Brown’s Radio 702 show in December 2017, Ramaphosa had a shift in conscience. He said he believes Kuzwayo was raped. He initially answered Brown’s question saying that he had ‘to go with’ the ruling of the court. At the same time, he said he had to ‘pay heed’ to Kuzwayo and ‘pledge his sympathy’ towards her because of the bravery she’d showed in coming forward with the rape allegations. Ramaphosa used Kuzwayo as a political gimmick when he needed support for the ANC presidency campaign.

The majority of South Africa and the world are riding this wave of optimism and rainbows. Ramaphosa is portrayed as South Africa’s saviour, ridding the land of the evil left by Jacob Zuma.

This is seemingly because Ramaphosa is untouched by the corruption scandals that have plagued South Africa. But Ramaphosa helped prop Zuma up for the past ten years. He supported Zuma during the motion of no confidence, putting party above country. Are we now to expect that he has changed and will prioritise the nation before the party. Â

“The older generation is definitely attached to the idea of Ramaphosa, they have this kind of romanticised memory of him. People have seen his involvement in business in a positive light: he’s a good businessman, effective and efficient and he’s not corrupt. I’m not sure how that filters down to the youth because they obviously have much less attachment to that”, Essop said.