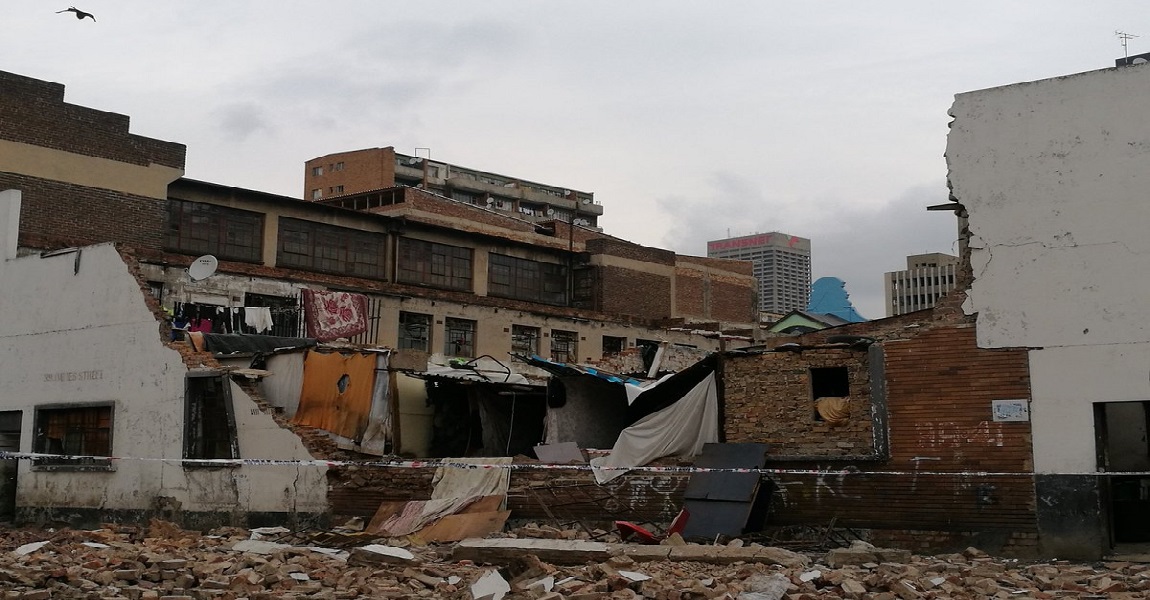 On Monday 9 April, an abandoned building that housed families at 39 to 41 Davies Street in Doornfontein partially collapsed. The collapse killed three young children, two others were rushed to the hospital. This tragedy is a symptom of a greater problem of poor and unsafe housing in the Johannesburg inner city.

The Socio-Economic Rights Institute of South Africa (SERI) represents the residents of the building. The residents had known that the building was unsafe for some time, the non-profit organisation said in a statement. SERI had been pressing the City of Johannesburg to provide the residents with emergency accommodation since mid-2017, which would have allowed them to move out of the dangerous building to safer accommodation elsewhere.

City officials also submitted a report to the mayor in July 2017 recommending that the residents be moved to alternative accommodation. The City did an audit of the residents in August 2017 but for the eight months that followed, it hadn’t taken steps to provide the residents with safe alternatives to reside in.

According to SERI, an estimated 100 000 people live in abandoned properties in the Johannesburg inner-city – many in unsafe conditions. Residents of these buildings have no choice but to live in these buildings as they cannot afford rent or to buy houses on the market.

Johannesburg executive mayor Herman Mashaba was on the scene of the collapse on Monday.

I would like to extend my deepest condolences to the families and loved ones of the deceased children. May their souls rest in peace. pic.twitter.com/tquND1Vurw

In a statement Mashaba said the 30 families who lived in the building had been safely removed and that firefighters would be tearing down the rest of the building to ensure that it does not collapse any further. The department of public safety’s disaster management team also assisted the displaced.

Mashaba acknowledged that hundreds of these dilapidated building exist all over the city and said many of these buildings had been abandoned and the owners unable to be traced. He said this makes it difficult for the city to ensure compliance with applicable by-laws and contributes to the degradation of the urban environment. “Far too many residents live in derelict and unsafe buildings and the slum-like conditions infringed on their right to dignity,” Mashaba added.

The mayor said he wrote to former public works minister Nathi Nhleko in February 2018 to request that an agreement be concluded with the department to name the city as its nominee for the transfer of these abandoned properties in Johannesburg.

“To date, I have not heard back from the former or current minister, Mr Thulas Nxesi,” Mashaba said in the statement. Mashaba said he had sent a follow-up letter to Nxesi on Monday morning before the tragedy, asking that his department and the city work together in the best interests of residents.

“This is what so-called human rights lawyers fight for – the right for people to live wherever and in any kind of structure despite the dangers. Where are they now to defend this tragedy? How many children should die?” Mashaba added.

According to the law, if an eviction would render the occupiers homeless, local government has a constitutional duty to provide the occupiers with temporary alternative housing or emergency housing, SERI senior research associate Michael Clark said to The Daily Vox. An eviction can only be executed if local government has made alternative accommodation available for occupiers.

“SERI believes that tragedies like this wall collapse could be avoided if the City allocated more resources to providing safe, decent emergency and permanent accommodation for the very poor, something which the City has been reluctant or unwilling to do,” said Clark.

Clark said if Mashaba is serious about ensuring that people in the inner city live in humane, safe and healthy conditions, he needs to implement a plan. This plan should ensure the provision of basic services to all inner city buildings; expropriate buildings that aren’t maintained by the owners and upgrade them; roll out a public rental accommodation programme for those who can afford rents of no more than R800 per month (current social housing is unaffordable to the vast majority of poor and low-income households); regulate building owners to ensure that they provide reasonable living conditions; safety standards and basic services; and scale up the emergency alternative accommodation available to people facing eviction proceedings and disasters, who are unable to afford market-related rental and would otherwise be homeless as a result of the evictions.

“Only then will these types of disasters and the fatalities that come with them be rare rather than tragically inevitable,” Clark said.