Home Features These elections have dealt a blow to the ANC they didnâ€™t see...
WhatsApp
Facebook
Twitter
Email
Print 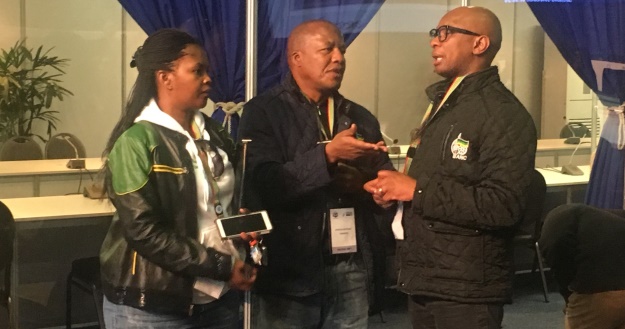 By Friday evening, the ANC had won 54% of the national vote in this weekâ€™s local election, to the DAâ€™s 24%.

Commander in Chief of the Economic Freedom Fighters Julius Malema said the ANC had been humbled in these elections. â€œThe EFF has ensured that the ANC got less than 60%,â€ he said.

Zizi Kodwa, national spokesperson of the ANC however insists that despite dropping nearly 10% since the general election in 2014, the ANC is still the most popular political party in the country.

â€œThe ANC in this election is a winner,â€ he said. â€œIf you look at the map, the ANC remains a very dominant and the majority party, which is leading a number of councils.

Kodwa however refused to be drawn on pronouncing on the ANCâ€™s performance in this election.

â€œIt may yet be early days to say which areas we can say we have not performed well. But weâ€™re quite satisfied with the response of our people,â€ he said.

â€œI think that naturally we may have to go back as a party, in totality, to reflect in a number of areas where we did not perform as we should have,â€ he said.

Sithembile Mbete, an analyst from the University of Pretoriaâ€™s political sciences department, said the ANC in effect lost against itself.

â€œEven though the ANC has maintained many of the wards it used to have, its support overall has declined significantly in its core support base areas and this should be a big concern to the party because if they don’t do something dramatic to stem the tide, then this tide could be expected to continue,â€ she said.

Kodwa said the party had flagged low turnout in its strongholds as a possible explanation for its poor performance.

â€œFor example, the low turnout is an issue that we must look at because it doesnâ€™t start with this election, itâ€™s been coming with the recent by-election,â€ he said. â€œ Weâ€™ve seen a number of areas where, even where we win, weâ€™re winning by a slim margin.â€

He said that bad weather could explain the turnout, but it could also signal unhappiness â€œregarding some things in the ANC – the candidates, or so onâ€.

Kodwa admitted however that the party would be forced to reflect on its performance.

â€œWe have to go back as a party, look back and look at the factors,â€ he said. â€œThe reason we must do so is because, if necessary, we must self-correct – we must own up to our own mistakes.â€