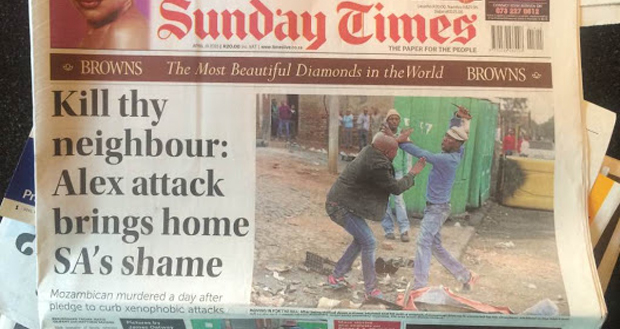 Emmanuel Sithole came to Johannesburg from Mozambique, to make a living selling cigarettes on the pavements of Alexandra township. His path crossed that of a group of South African men who tried to steal his goods. He resisted, was beaten with a monkey wrench andÂ stabbed in the heart, becoming one of the seven people killed in the latest spate of xenophobic attacks in South Africa.

We know allÂ this because a photojournalist, James Oatway, was on the scene and documented the attack as it happened. Oatway and his colleagues rushed Sithole to hospital, but to no avail.

That Sunday, we saw the attackÂ play out on the front page of the biggest newspaper in the country, frame by frame.Â Is this the journalistic version of a snuff movie or the â€œfirst rough draft of historyâ€? And is it in the public interest?

Among the questions that followed the Sunday Times report, were the familiar ones about objectivity and involvement. Should the photographer have intervened? Should he have intervened earlier?

In an interview with eNCA, Oatway explains the immense pressure under which photojournalists have to make decisions which then reverberate for long afterwards. The whole attack, he says, was over in two minutes â€“ there just wasnâ€™t time for considering various courses of action. â€œMy job is to record what happensâ€, he says. â€œThis is what I do â€¦ There was no other call for me to make. Iâ€™m a photojournalist.â€

One could ask further questions, about the decisions made after the heat of the moment had passed. Should the pictures have been published on the front page of a newspaper, where children could see it? Should the media not allow people to die with dignity, and find other ways of telling the story? Who among us would like to see the last dreadful moments of our husband, father or friend consumed by all and sundry over aÂ Sunday morning cappuccino?

Then there were questions of whether the media would ever publish similar pictures of dying white people, and whether theÂ coverage could fan revenge or lead to copycat attacks.

This is not the first time that these questions have been asked. A classic case in this regard was Kevin Carterâ€™s photograph of a starving Sudanese child, with a vulture waiting behind her. Photographers are often accused of being vultures themselves, while the audiences consuming the images donâ€™t question their complicity in creatingÂ a demand for them.

The weight of these questions can wear people down, while they are doing what they consider to be a job in the public interest.Â The photographers too deserve our compassion.

In the eNCA video, we can see the fatigue in Oatwayâ€™s eyes, as he speaks of his anger and sadness at having witnessed the senseless killing of a man in front of him. Hopefully Oatway can find solace in the good consequences that his report has had, as the alleged killers have been apprehended and appeared in court.

For Carter, the unbearable weight of seeing became too much in the end. His suicide noteÂ spoke of being â€œhaunted by the vivid memories … of starving or wounded children, of trigger-happy madmen, often police, of killer executionersâ€.

In his book Media and Morality, Roger Silverstone argued that the key question to askÂ is what the â€œproper distanceâ€ would be from which toÂ witness daily news events. If we stand too far, we can become callous voyeurs of pain and tragedyÂ andÂ run the risk of never developing an empathy that goes over into action. Too close, and we may be misled into thinking that we understand the â€œotherâ€ totally, and that our own little world, therefore, does not have to change at all.

The challenge is not to be so overcome with tragedy that it leaves us paralysed (Susan Moellerâ€™s â€œcompassion fatigueâ€), and to guard against thinking that we are so familiar with pain that differences and power relations cease to exist between viewer and object.

Yeats said it already: This world is more full of weeping than we could understand.

As was the case with his compatriot Ernesto Alfabeto Nhamuave, who was burned alive during the xenophobic attacks in 2008, Sithole is likely to become an iconic image of the violence that is currently besetting our country. For this powerful symbol we have Oatway to thank.

Although good consequences is a tenuous position from which to argue for the ethical justification of actions, Oatway and the Sunday Timesâ€™ actions could be justified from their consequences in this case.

But the case of Emmanuel Sithole should prompt us to ask more substantive questions about how decisions are made in newsrooms, how journalists see their role in society, whose stories get told, and who gets to speak.Â Sitholeâ€™s story should also force us to confront the news values that determine which stories do not get covered.

We see a lot of criticism of the publicâ€™s right to know when the state exerts pressure on the media, but the same scrutiny is not brought to bear on pernicious market forces that determine news agendas to the extent that they also feed into an ignorance of the â€œotherâ€ who fall outside the narrow interests of commercially-defined news markets.

A related question is what happens to these stories once the immediacy of the events have passed. Does the media move on to the next event, covering another spike in violence, crime or scandal, or do they stick to the story and try to get to the bottom of it? The wall-to-wall coverage of Oscar Pistoriusâ€™ court appearance was a case in point â€“ it obscured for instance the much less sensational but very important Farlam Commission into the Marikana massacre.

If the way we cover xenophobia is determined by market forces alone, instead of a desire to understand and change our society, journalism loses its moral claim to protection and safeguarding. We could directÂ Stuart Hall’s question about cultural studies in a time of Aids at the media during conflicts like these: â€œAgainst the urgency of people dying in the streets, what in Godâ€™s name is the point of journalism?â€

This is an abridged version of an article that first appeared on Litnet. Read the full version here.

Herman Wasserman is professor and director of the Centre for Film and Media Studies at the University of Cape Town. He has published widely on media in post-apartheid South Africa, including the monograph Tabloid Journalism in South Africa: True Story! (Indiana University Press) and several edited collections. He edits the journal African Journalism Studies. Follow him on Twitter.