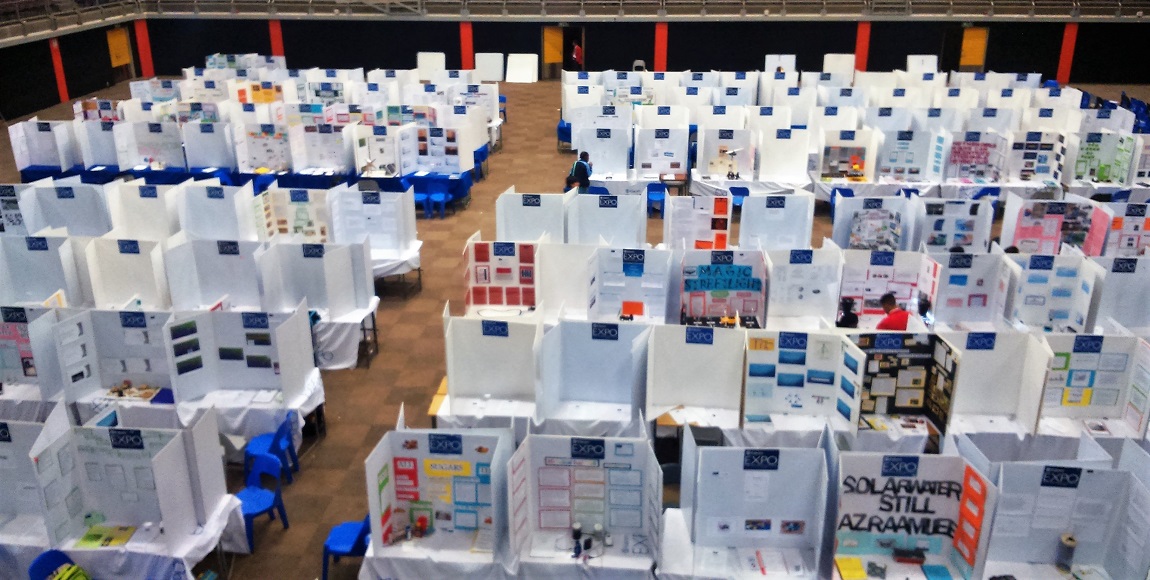 The fields of science, technology, engineering, and mathematics (STEM) have created solutions to the pressing problems of modern life. Naledi Pandor, Minister of Science and Technology, has said that the future of Africa depends on increasing support for young scientists.

In the spirit of encouraging young people to take an interest in science, Eskom held its 19th Young Scientist ExpoÂ on Saturday August 26, 2017. The University of Johannesburgâ€™s Soweto Campus Sports Centre was filled with science projects made by learners from schools across Gauteng.

Dev Mamabolo, Gauteng province coordinator for the Eskom Expo said the project targets learners from grades five to 12 to promote STEM subjects. â€œWe start at the early age so that they become aware of all the possibilities that are there for them,â€ he said.

The projects on display ranged from experimenting with toothpaste made from banana peel (which apparently whitens tooth enamel more effectivelyÂ than conventional toothpaste), to building a magnetic device that generates electricity. Mamabolo said learners were required to conduct their experiments according to the same criteria used in university. â€œIt is about promoting researchers and the young scientistsâ€¦ to follow the very same methodology of doing a scientific project like a masters or an honours student.â€

The learnersâ€™ projects were judged by experts and teachers in STEM fields, who will give the learners guidance on how to make their projects better. Winners of the regional expo will get participate in the International Science Fair in October.

There were a few prizes awarded to many learners, with the Eskom Special Award being one of them. Some of the learners that won include Sonali Bhaga, a grade nine learner from Hoerskool Drie Riviere who created a microbiofuel cell battery; Fritz Guldenpfennig, a grade 10 learner from Word of Life Christian Academy who investigated in the effects of air pollution on our genetics; and Nkazimulo Sibanda, a grade 9 leader from Thuto-Kitso who explored using smoke as a source of renewable energy. The Daily Vox spoke to some of the youngÂ scientists at the Expo to find out about their projects and why they dig science so much. Keoratile Khauli, 11, and Palesa Sekgosana, 12, grade 6 at Lakeside Estate Primary School
We asked four learners to come and then we gave them four different teas to try. We gave out Joko tea, Glen Tea, Five Roses, and rooibos tea. They make the cup of tea and drink it. After they have drunk the tea, you have to take the tea bag and place it in medium-hot water for 60 seconds. You then have to tap the tea bag against the skin while wet two times. You have to leave it on your face for 10 seconds before wiping it off with your face cloth that has been dipped in the tea leaf water. We discovered that rooibos tea was the one that worked. Yashika Naidoo, 14, grade 8 at Waterstone College
My project is determining whether people study better with or without music. My best friend and I are really opposite. She likes to study with music but I study without music and we both get good marks. We gave surveys out to family and friends. We gave them two articles and asked them to read one article with music, and they would write down five facts they could remember. Then they would read the other article without music and write down five facts.

Our project is inconclusive because it depends on the type of person and age because our parents didnâ€™t have that type of influence and get a chance to listen to music while they were studying. Now that weâ€™re in a new era, people now study better with music. Itâ€™s often dependent on your preference.