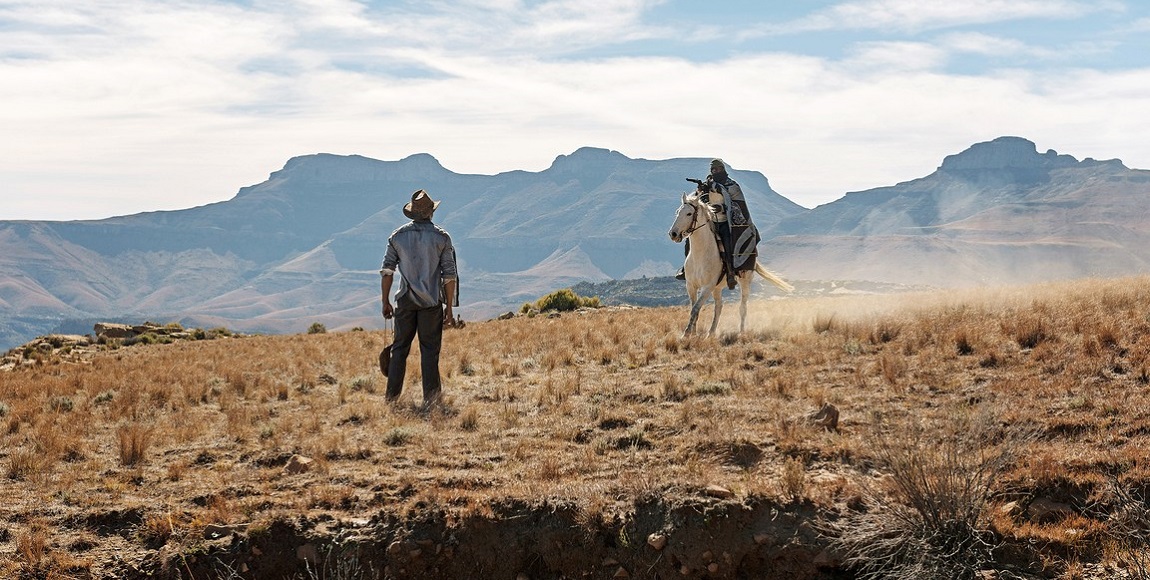 “Why did you come back? Once you turned the world upside down and ran. Now you are here and it starts again.”

What happens after we realise that our plans have come to nothing, that we are fallible against the forces of evil, and that our friends and comrades will inevitably betray us? What do we do after that? Michael Matthews’s western film Five Fingers For Marseilles is a stunning attempt to answer a question that – whether we realise it or not – looms over post-apartheid South Africa like a foreboding thunderstorm.

Five friends live together in Railway, a township attached to the frontier town of Marseilles. (The film was shot in the Eastern Cape.) The people are harassed by the apartheid police, and the friends decide to band together to fight the oppressors: Zulu the fearless leader, Unathi the pastor and storyteller, Lerato the heart and soul, Luyanda the broken one (also called “the cockroach”), Bongani the rich one (also called “Pockets”), and Tau (the Lion) the fastest and meanest.

Their plan is almost immediately a grim failure: Tau unintentionally kills the two policemen and flees, abandoning the Five Fingers and Railway.

Twenty years later, Tau (played by Vuyo Dabula) returns. Railway has clearly changed: the apartheid police are gone and black police officers now run the place. Or at least, run Marseilles. The political leadership of the town is now black. (Pockets, played by the inimitable Kenneth Nkosi, is now the populist and cowardly mayor of Marseilles.)

And yet, somehow, everything is worse than it was. The police, under the leadership of Cockroach, are ineffective. Railway is run by Sepoko, or The Ghost, a gangster so broodingly creepy he seems like a demon summoned from hell itself. (Hamilton Dhlamini, playing The Ghost, completely steals the show once he gets his screen time. You would never ever want to meet this man in real life.) His lead henchman Thuto (played by Warren Masemola) is a volatile and violent drunkard who terrorises the people of Railway. Lerato (Zethu Dlomo) now runs a ramshackle shebeen, frequented by the township’s drifters and nobodies.

Tau himself has changed: years as a robber and incarceration have scarred him. He’s returned home to live the rest of his life out in peace. The first reaction as his former Five Fingers mates recognise him is less than pleasant. There will be no easy redemption for the man who shattered their young lives and then ran away.

There are no heroes in Five Fingers For Marseilles. All carry the weight of some past loss or disappointment. Everybody is broken in their own way: some are drunkards, some are cowards, and all of them clutch too eagerly at their pistols. Fair warning: the film’s tagline is “there are no good men”, and inevitably for a story set in South Africa, there is very little by way of kind treatment to women in it.

This is a film, then, for Jacob Zuma’s South Africa. The promise of overthrowing the old regime has been disappointed by the corruption, violence, and selfishness of what has replaced it. The land is not returned to those who were dispossessed of it, in spite of the fact that the townsfolk feel a deep kinship towards it, and believe it is their duty to defend it. The rich are in it for themselves, in unholy alliances with corrupted state power (the police) and gangs. Those who would be heroes are consumed by their personal histories of failure, each of them unwilling or unable to be the change that the town so obviously needs.

The slow-burn pace of the film, coupled with eye-poppingly gorgeous cinematography and setting, gives it almost a dream-like feel. Shaun Lee’s intensely beautiful shots are matched only by the beauty of the landscape itself.

You may read elsewhere that the ending is disappointing. A friend who saw the film with me exclaimed: “why did it have to end that way???” And it is frustrating. But if this is really a parable for post-apartheid South Africa, then why should it end nicely? That would be dishonest. Look around you. This is a country of failures. There is little redemption to be found. What we have is incandescent violence everywhere.

The film may contain a slight disappointment for native-language Sesotho people. It suffers from the same dissonance that afflicts practically all South African films and television series: it was written in English and translated into Sesotho (and some Xhosa) by Mamokuena Makhema. Inevitably, much of the rich meaning in the language is blurred or faded in the English subtitles. Perhaps it is time for local producers and directors to just hire native-language screenwriters in the first place, instead of this translation back-and-forth that might be fine for TV soapies like Generations or Skeem Saam, but it doesn’t quite cut the mustard at this level.

The greatest triumph for the filmmakers will be that Five Fingers For Marseilles was made at all: local investors are notoriously reluctant to fund local productions don’t rely on some Hollywood stardom or a mostly-English script. It is a tremendous feat that a genre-bending film with a local black cast, in an African language got made at all. It will pave the way for more in future. And Sepoko will be good content for your nightmares for a few weeks after.