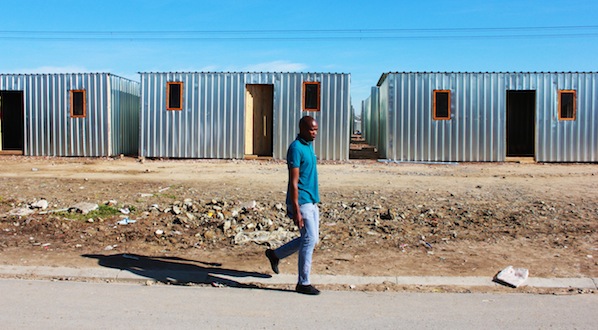 Developed by Shack Dwellers International (SDI), a network of community-based organizations of the urban poor, re-blocking is a process where shacks are reconstructed and rearranged to “maximise open space”. It allows shacks, which often spring up organically and in unsystematic ways, to be realigned in clusters so that clear spaces can be used for the benefit of residents.

So, how is shack re-blocking beneficial?

1. By improving access to water, electricity and basic services
The failure of local governments to deliver services is a major source of frustration for the country’s poorest citizens. Last year, reports indicated that South Africa experiences a service delivery protest roughly every two days. Through re-blocking, shacks are aligned in organised clusters that create more space so that municipalities can begin to build the necessary infrastructure – such as water and sanitation pipelines, and electric lines – to improve services in informal communities.

2. By preventing shack fires
On Sunday over 120 people were displaced and one person killed when two vicious fires blazed through George Goch informal settlement in Johannesburg. Re-blocking can prevent shack fires as newly constructed shacks are built with fire resistant materials, and allow fire services to better access structures that have caught fire.

3. By creating a passage for emergency vehicles
When shacks are realigned, better roads can be developed. Shacks are built in a disorganised jumble; even where shacks are built in rows, roads may become obscured when new shacks are built in open spaces or where people build extensions to existing shacks. Re-blocking shacks into a grid formation enables ambulances and police vehicles to more easily travel to where they are needed.

4. By preventing flooding
Re-blocked shacks are often built on a platform that prevents water from pooling underneath homes and seeping into their interiors. Because there is less dampness, community members have a greater chance of staying healthy.

5. By increasing community engagement
Mtshini Wam was one of the first successfully re-blocked informal settlements in Cape Town. The City, along with civic organisations such as the Informal Settlement Network (ISN) and the Community Organisation Resource Centre (CORC), collaborated with the community, and involved them in the re-blocking process. “I’m a community designer,” said community member Luthando Klaas.

Involving and inviting members to participate in rebuilding and uplifting their communities, ultimately encourages and promotes further betterment in the lives of residents.

But re-blocking doesn’t always work the way it’s meant to.

When re-blocking fails
Earlier this year 15-year-old Tsepiso Karadi was stoned, stabbed and trampled to death after community members were angered when he stretched his fence in compliance with the local councillor’s orders for a shack re-alignment exercise.

The incident demonstrates the communication vacuum that often exists between local government and communities. Karadi died in Protea South Informal Settlement in Johannesburg, after months of dispute over the realignment. While the ANC and DA were battling out in court, residents appear to have been left in the dark about how the process is meant to benefit the community.

Shack re-blocking can help uplift communities but only if the government engages with communities and involves them in the process.