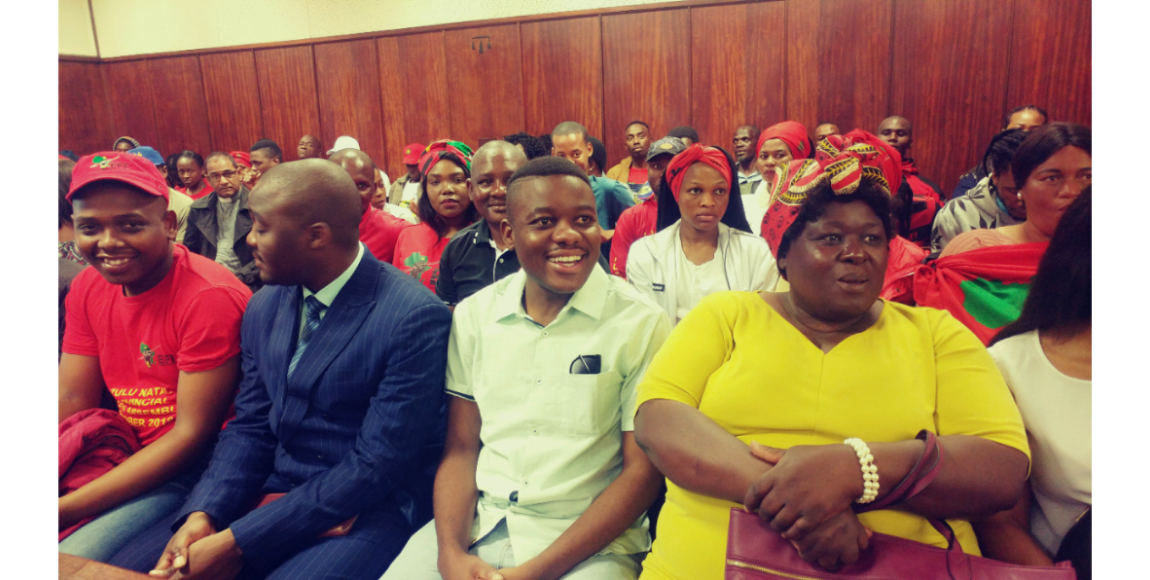 Durban University of Technology (DUT) Fees Must Fall (FMF) activist Bonginkosi Khanyile says the trial has caused him anxiety and is affecting his studies. This comes after the court postponed his sentencing to 2019.

On Tuesday, Khanyile – who was found guilty on charges of public violence, possession of a dangerous weapon, and failing to comply with police instruction – was due to be sentenced. However, the Durban Magistrate’s Court postponed the matter to January 28 2019, pending a pre-sentence report finalisation.

In July, a 40-minute police video that allegedly implicated Khanyile in acts of violence against police on the day of his arrest – September 27, 2016 – was screened in court. Khanyile and his cohorts were caught hurling stones and bricks at police.

Khanyile appeared at the court moments later. Standing in the court dock with crowds of supporters behind him in the public gallery, he told the court how the trial has caused him anxiety and sleepless nights.

“From when I was found guilty as a person I’ve been living in a state of anxiety and been very stressed. I want to put it to court that this matter is making me thinner by the day. I am a student, studying and looking for employment.”

“I wish this matter can come to finality. This thing is eating me inside out, and I don’t know what the future holds for me,” he said.

Magistrate Siphiwe Hlophe explained to the accused that the intention of the State was to postpone the matter to November, but that his lawyer won’t be available then.

EFFSC students and public members came out in numbers to rally support for Khanyile, and packed the public gallery. A North West University student, Dikago Pule, said he came all the way from Mafikeng to show solidarity to Khanyile.

“I was once arrested and I’m here today to show Bonginkosi Khanyile support. He was fighting for a genuine cause and deserves to be pardoned. We are being oppressed by a system that is against us and we need to show up for each other when we are faced with circumstances like this,” Pule said.

Asked about the process of his pardon initiated with the Justice Minister was unfolding, Khanyile said that he would have to be sentenced before he can be pardoned.

“The process is unfolding for other comrades who have already been sentenced, because there is some process they have engaged in. But I can’t apply for pardon while I haven’t been sentenced,” Khanyile said.

Khanyile is expected to be back in court for sentencing on January 28 2019.