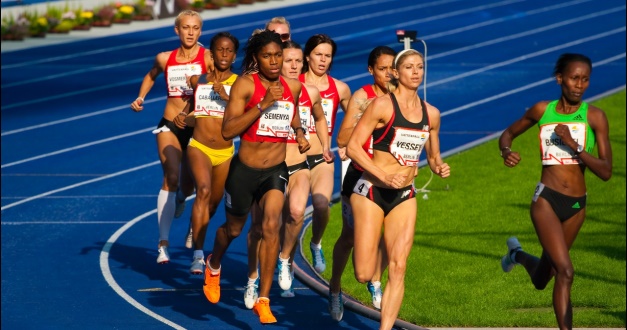 The gender testing or gender verification methods of the International Association of Athletics Federation (IAAF) and the International Olympic Committee (IOC), otherwise known as the witch-hunting misogynists conglomerate, are fiercely recurrent in the global sports community. Their early intention was to catch male athletes posing as women. However, most of the athletes caught in the witch-hunt have been women who naturally produce more testosterone than others. The Daily Vox followed the ways the practice of gender testing hasÂ changed through the years, but still remains a thing.

Track stars Stella Walsh of Poland and Helen Stephens of the United States were accused of being men at the 1936 Berlin Olympics. Stephens had her genitals physically examined before the 100m race and she was declared female. Walsh was examined after her death and it was revealed that she had â€œambiguousâ€ genitalia. Soon after that, German high-jumper and gold medal winner Dora Ratjen was suddenly identified as male at the European Athletics Championship. Ratjen admitted that the Nazis pressured him to pose as a woman for three years. This fuelled the growing anxiety about gender fraud in athletics.

The Soviet Union won 23 medals because of their muscular female athletes after joining the Olympics in 1952. By the 1960s, rumours flared that the female athletes were men who bound their genitalia. Shortly after, international sports administrators required female competitors have â€œFemininity Certificatesâ€ to verify their sex. It wasnâ€™t until 1966 that international sports officials decided that they could not trust nations to certify the femininity of their own athletes. A mandatory â€œnude paradeâ€ required for every woman competing at international games. This was done by each woman laying on her back and to pulling her knees towards her chest before a panel of doctors and Olympic officials physically examined her.

In the late 60s, the IAAF and IOC introduced a new â€œgender verificationâ€ strategy. They turned to chromosome testing instead because they thought it was a more dignified way to root out male posers and people with â€œambiguousâ€ genitalia – both barred the games in order to ensure fair play. After Spanish athlete Maria Jose Martinez Patino underwent chromosome testing in 1986, it was found that she had XY chromosomes and internal testes. When her test results were made public she lost her athletic scholarship, her boyfriend, medals and her records.

1996 – 2006: only suspicious-looking women from developing countries were being scrutinised

By the mid-90s, only those who â€œraised suspicionsâ€ about their gender were subject to mandatory testing. This could be done by way of a hormone test, a gynaecological exam and a psychological evaluation. Indian athlete Santhi Soundarajan was tested by the Athletics Federation after her race at the Olympics. When her results were leaked to the media, she lost her silver medal, she was rejected by local sports federations and attempted suicide after it spread like wildfire that she had failed a sex test.

2009 – 2016: the gatekeepers of hyper-masculinity kept their eyes on Caster Semenya and women from developing countries

After Semenya won at the 2009 World Athletics Championships, her sex test results were leaked to the media. She went into hiding after comments were being made about her unshaved armpits, the long shorts she prefers to run in and her flexed-bicep pose. The IAAF announced that it would institute tests for â€œhyperandrogenismâ€ and abandon the Gender Verification Test by 2011. They said they were determined to protect females from those who have â€œhormonal advantagesâ€ commonly associated with men by banning them from athletic games.

Shortly after the hyperandrogenism policy came into effect, athletes were pressured to reduce their testosterone production if they wanted to compete in athletic games. This required undergoing treatment such as removing internal testes or taking hormone suppressing drugs. Physicians advised that although this wouldnâ€™t amount to a health risk, it would possibly affect their performance. Female athletes were also advised to surgically reduce their large clitorises to make their genitalia more typical.

Most recently, Indian 100m track runner Dutee Chand took the IAAF to court after being rejected for high testosterone test results. The Court of Arbitration for Sport reached a decision that women who naturally produce high testosterone levels can compete in the Olympics until proper proof is provided by mid-2017 that testosterone unfairly enhances women’s athletic abilities.

The development of gender testing over the yearsÂ has shown that we cannot rely on science to draw a line that nature itself refused to draw. If women are pressured to mutilate their genitals to participate in the Olympics, then there is a wide gap between athleticism and feminism. A sportswoman must either â€œrun like a girlâ€ or suffer public smearing for coming on too strong.