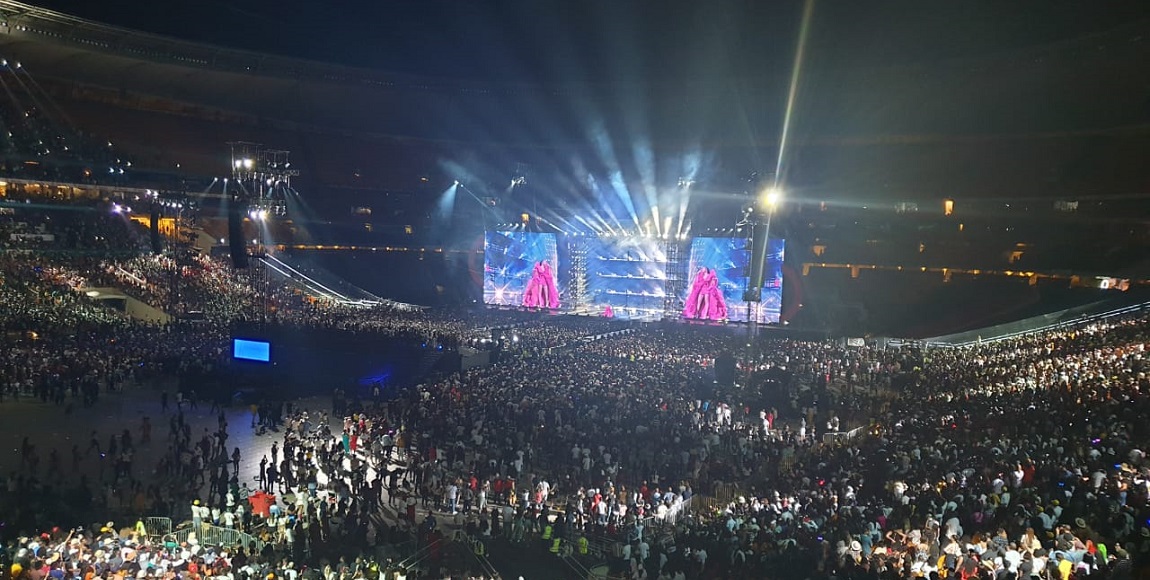 éWhat happened outside the FNB stadium in Soweto after the Global Citizen Mandela 100 Festival on December 2 sounded like a scene straight out of The Purge. Social media was flooded with terrifying accounts of violence and lawlessness with people saying authorities stood back as criminals took the reign.

As beautiful as Beyoncé’s performance was, that will not be the memory that will linger with many about the festival. It is evident that the organisers, the security, the police failed the concert-goers who were victims of violent crime after the event.

The targeted site for the crime was the Sasol garage just outside the stadium. Although there were many people waiting at the garage, assuming it would be safe, it became a cage that people could not escape.

The stadium is situated in Nasrec, a remote area outside Soweto. Aside from the Sasol garage, most of the area around the stadium is bush. It’s isolated. There’s no room to walk because it’s dark and unsafe. The traffic was almost at a standstill. Although there was an Uber pickup area, the signal was jammed and there were hundreds of people trying to get an Uber with the surge charges costing more than R 1000 per trip. Besides, with the traffic getting an Uber was difficult.

People were held at knife and gunpoint and robbed. There were stories of women being assaulted. Even some of the people in cars leaving the stadium were held up and robbed.

“We were really scared because with the shootings we didn’t even know if we were going to make it out at all. The traffic was backlogged and none of the cars could get to the Sasol garage. It was so crowded and you couldn’t go anywhere because you weren’t safe,” Imaan Moosa, who was waiting at the Sasol garage that night, said in an interview with The Daily Vox.

Tonight was both the best and worst night of my life. The best because I got to see BeyoncÉ and Jay Z live (& Ed Sheeran). The worst because this happened:

As women, Moosa said she and her group of friends were doubly afraid. “Most of us who were there were women and young girls. Most of the men who were stealing peoples things were very dangerous, grabbing onto women and dragging them across the floor,” Moosa said.

I legit saw thugs trying to rape a young lady at the Sasol. The screams were harrowing, her boyfriend tried to fight the guys off, luckily a crowd of men were able to help them quickly enough.

Sorry in going on about this but wow I can’t believe what was happening. Shaking.

Two girls, who sought safety in the group that Moosa was standing with, said they had just jumped out of a moving police vehicle because they felt unsafe in the cop car.

“When she told us what happened, she didn’t even have to say there was a possibility that she could be raped and murdered but we all understood that if they hadn’t escaped that could have happened,” Moosa said.

Two girls who ran up to our group asked the guys if they could stay with us. They’d just jumped out of a MOVING vehicle. A police officer offered to escort them to the garage in his police car. One of the girls had a bad gut feeling and asked to be let out.

We don’t have to debate Global Citizen’s brand of activism. We don’t really believe that attending a Beyonc concert and tweeting Justin Trudeau can eradicate poverty. But it was still ironic that we listened to speeches about gender equality and creating a safe world for women and children when Global Citizen’s management didn’t even have adequate safety measures in place to protect said women and children from the crime hotspot outside the concert.

The saddest thing is how #GlobalCitezenFestival advocated for Gender Equality and Safety for all women and yet women were the biggest victim of last night’s trauma at #Sasol. #GlobaCitizenFestivalSA #GlobalCitizen how are you going to help those who were affected?

The worst part, Moosa said, was that the authorities who were supposed to keep the public safe did nothing at all. “The Johannesburg Metropolitan Police Department (JMPD) was directing traffic. They weren’t any help at all. There were security guards at the Sasol but they weren’t doing anything,they were just standing around,” she said.

It was sobering to read through the content on social media. I was there on Sunday night too. Luckily, my friends and I got home unscathed and unaware of what was happening just up the road from where we were parked. But the five of us – all women – could easily have been the victims of the violence and mayhem: What if we parked in a different place? What if we walked in the wrong direction? What if we hadn’t driven to the venue and were dropped off, or had decided to Uber?

It’s no secret that South Africa is a country with glaring inequality. In a stadium situated right in the middle of a number of informal settlements, the socioeconomic inequality could not be more evident. Crime is just one of the symptoms of the disease of poverty and inequality. This does not excuse the crime, it explains it. Every time there is an event at the FNB stadium, it becomes a hotspot for crime. This is not the first time and unfortunately it probably won’t be the last time that people get mugged outside the stadium. You can’t expect to place people in a place where the socioeconomic disparities are so apparent and expect them to be safe.

That’s why we expect better from the security and the police who are supposed to protect us. We expect better from the organisers who expect us to attend their events without guaranteeing that we will be safe. Considering that the premise of Global Citizen is fighting inequality, it seems organisers acknowledge it on an abstract level without understanding its effects.

According to the Stadium Management South Africa, the criminality was because of a lack of security resources in and around the precinct. Stadium Management’s Jacques Grobbelaar said their mandate was primarily to provide the venue. “What we saw happen last night in the precinct is a direct result of the lack of resources in the parking areas, on roads and in near and adjacent to the stadium, and the road functions which in terms of the planning, were meant to be executed by the JMPD and the South African Police Service,” he said.

This is unacceptable. It’s also unacceptable that the Minister of Police Bheki Cele wants us to open criminal cases for every crime that was committed instead of holding the police who were present accountable for their inaction, or promising to tighten their presence at the next event.

Minister Cele addresses tweets about the alleged incidents that took place after the #GlobalCitizenFestivalSA. He says only one person has opened a case adding that he inviting everyone who was a victim of crime to come forward and open a criminal case. #sasol @AlgoaFMNews pic.twitter.com/u8NJCbyLLC

It’s as if ordinary people are just collateral damage made to suffer for an inequality that was not designed by us. The truth is we all suffer the symptoms of an unequal system at varying degrees. Obviously, it’s worse for those who have to live through poverty. But it also absolutely disgusts me that some people are playing woke politics claiming a Robin Hood argument that criminals are stealing from the rich to redistribute the wealth.

Since when are we debating the morality of criminality? We can debate the morality of the systems in place that force people living in poverty to commit crime. But we cannot justify stabbing and shooting, sexual assault and rape. Besides why are we painting all the criminals as single fathers who were just stabbing, dragging and assaulting people to put food in the mouths of their starving children?

To the organisers of the events, it’s this simple: if you can’t guarantee the safety of people who attend your event then don’t hold the event. We expect better. In fact we demand better. We demand to live in a world where everyone can feel safe. We demand to live within a system that does not breed crime. We demand that our bodies be seen as more than just collateral damage in the war against inequality.