Home Identity How Anti-Racism Week’s Campaign Fails To Get To The Root Of The...
WhatsApp
Facebook
Twitter
Email
Print 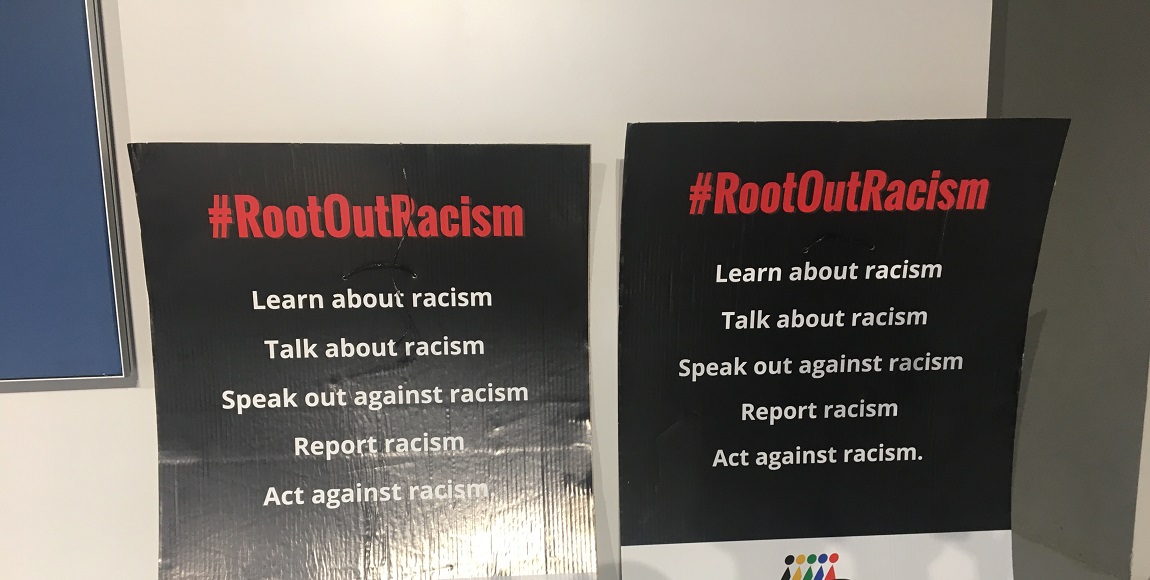 On Tuesday, the Anti-Racism Network South Africa (ARNSA) launched the official 2018 Anti-Racism Week which is to take place from 14 to 21 March 2018. ARNSA is an alliance of the Nelson Mandela Foundation and Ahmed Kathrada Foundation working to respond to racism in South Africa. The theme for this yearâ€™s week against racism is #RootOutRacism. The Daily Vox team were at the launch.

Attended by minister of arts and culture Nathi Mthethwa and former deputy minister of finance Mcebisi Jonas, the event served as a starting point for the various activities and events that would be happening during Anti-Racism Week.

Both Mthethwa and Jonas addressed the media and patrons of the week, giving out their reasons for supporting the initiative. Mthethwa said the struggle against racism needs to be a globalised struggle just like the struggle against apartheid was supported by actors all around the world. Mthethwa said that the roots of racism and exploitation, which was inherent to apartheid and colonialism, still exists and that is why the roots and not just the manifestations need to be addressed.

Jonas chose to use his address to speak about the racialised unequal economy and the fact that black inequality in South Africa has increased. He pointed out that there cannot be any progress made in defeating this inequality if things like state capture and corruption still persist as there is a need for a strong state in defeating inequality.

Several of the patrons of the week were also at the launch. These included the regional advocacy officer for Southern and Eastern Africa at the SRHR Africa Trust, Dr.Shakira Choonara, climate activist Catherine Constantinides, activist Stephanie Kemp, chairperson and founder of the Albinism Society of South Africa Nomasonto Mazibuko, Foundation for Human Rights programme manager Sarah Motha, and representatives from the department of justice and constitutional development.

They also spoke on why they thought this was an important initiative and why they have pledged their support. Most of them said it was because we need to have conversations around race in South Africa and fight against racism to honour the ideals of Nelson Mandela and Ahmed Kathrada.

However, despite the many speakers and patrons pronouncing their support for anti-racism and fighting racism, there are questions about how effective the tool of anti-racism is for the fight against it. Additionally, none of the speakers seem to bring anything radically different to the discussion about how we as South Africans can fight against racism and achieve the dream of a society that is one day not based on a racialised basis.

Anti-racism, as it has long been espoused by foundations like the Ahmed Kathrada Foundation, rests of the principle of non-racialism. However, this seems to create a fallacy that the goal lies towards creating a society where everyone lives together and everyone shares in the benefits of the land we live in. However, that doesnâ€™t address the main issues of whiteness and how its dominance in society continues to persist.

Fighting racism in society should be about ensuring that whiteness is no longer considered the norm in society. If there is a persistence in giving white people a seat at the table to ensure that they do not feel uncomfortable, will anything really be achieved is the question. White people most definitely need to be involved in these conversations but should by no means be the ones driving it.

The former deputy ministerâ€™s comments were also disingenuous in that the fight against inequality can be summed up as cleaning up the state with regards to corruption. The narrative that inequality can defeated if the state is working ignores the ingrained system of inequality that is the inherited legacy of apartheid and colonialism in South Africa.

Weeks like these are important because a lot of the time racism in South Africa is spotlighted only through events that happen like Penny Sparrow, Vicki Momberg, or the violence that took place in the North West.

It helps to show how pervasive racism is through its campaign in schools, universities, and other spaces. However, and this was pointed out by the speakers, it canâ€™t be just one week and cannot only be reactionary. So the question remains: how can racism be fought and tackled in a sustaining way? As the minister Mthethwa said the roots of racism needs to be addressed and not just the manifestations of it and maybe starting that will be a good point to start in tackling the issues of racism which pervades all aspects of South African society.