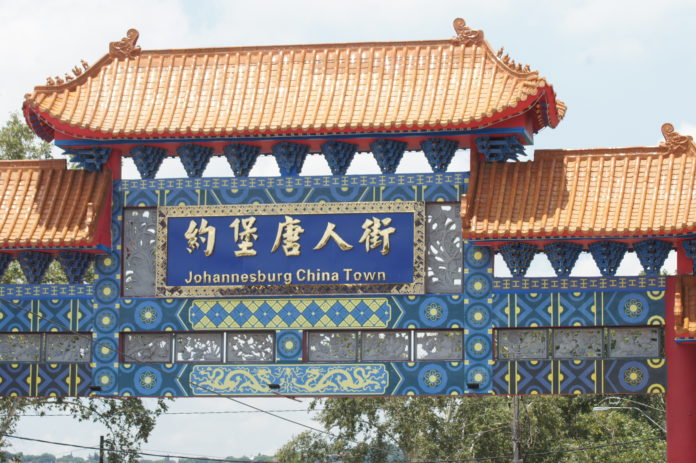 Walking down Derrick Avenue in Cyrildene on a Tuesday morning will make you think you are walking down a street in a Chinese city. Tuesday seems to be delivery day. Most of the stores are receiving their supplies with shop owners ticking off items from lists. The sidewalks are piled with boxes of fresh fruits, vegetables and fish, ready to be sold to customers. At the entrance of both sides of the street, two huge arches accompanied by huge stone lions proclaim that you are now entering Johannesburg ChinaTown.

Author’s Note: the images and interviews from this piece are from February 2020.

During an interview from 2020, a resident of Derrick Avenue explained how the street became known as ChinaTown. As the man related the history of the place, there was a continuous motion. People stopped by to buy fresh vegetables, get haircuts and meet up with friends. The street is rarely quiet. On one corner of Derrick Avenue, South African flags and lanterns were piled.

Every Lunar New Year, many people come to the street to celebrate the holiday. There is a mixture of people actually celebrating the holiday and those who come to witness the festivities, said the resident. The New Year celebrations have been impacted for the past two few years by the pandemic.

On Derrick Avenue and the surrounding Cyrildene area, most of the people living there are Chinese migrants from mainland China. They come from the Fujian province in China. The Derrick Avenue ChinaTown consists of three blocks of shops, markets, restaurants, street vendors, and hair salons. The area which was once inhabited primarily by Jewish, Greek and Portuguese people is now an area inhabited by Chinese immigrants.

The first ChinaTown in Johannesburg (found on Commissioner Street) and other Chinatowns around the world are usually located in business districts or shopping areas. This one is located in the middle of a residential area.

Speaking to The Daily Vox in 2020, Romain Dittigen, associate researcher at the African Centre for Migration and Society said the Johannesburg CBD Chinatown and the Derrick Avenue ChinaTown have two separate stories. Their growth is not related to each other.

The Johannesburg CBD Chinatown was formed by indentured Chinese labourers and South African born Chinese people. Dittigen said a few of these migrants came to work on the mines. However, due to apartheid laws, they were not allowed to work. However, they remained behind in South Africa and opened businesses and restaurants.

This area never really developed which Dittigen said is possibly attributed to the need for the people to avoid drawing the attention of the apartheid government. If the apartheid government took notice of them, they might have been forced to move or might have been subjected to the oppressive laws of the time. The area still exists but only a few shops and restaurants are still being run.

Dittigen said that Cyrildene used to be a predominantly Jewish and Greek community. During the political changes and the end of apartheid in the early 90s, many of the people moved out of the area. With this began the Chinese presence in the area. Dittigen said Derrick Avenue used to operate as a high street where there were kosher butcheries, bakeries and all manner of stores. So essentially what happened was “it changed hands from predominantly Jewish and Portuguese to Chinese,” he said.

From one grocery store, one restaurant and one bakery, Derrick Avenue has now evolved into a full street with many different stores and restaurants. The Derrick Avenue resident said the area developed because the people who moved to the area wanted to eat their own food, buy their own traditional clothes and get traditional haircuts.

The area has also evolved to operate during a pandemic. Many stores have the now familiar signs proclaiming “no mask, no entry”. Security guards take one’s temperature upon entering the store. Many stores also have plastic barriers between the customers and store-tellers.

Tensions within the community

In 2020, the Derrick Avenue resident said that South Africans are very welcoming and the people don’t have any issues. However, this isn’t always the case. Over the past few years, there have been times when non-Chinese residents living around Derrick Avenue have voiced several complaints.

At the beginning of the pandemic, there were worldwide reports of anti-Asian hate and racism stemming from xenophobic ideas. Many East Asian people around the world were attacked as a result of this anti-Asian hate and racism. At the beginning of the pandemic, this was an issue in South Africa with the ChinaTown losing business due to customers avoiding Chinatown amid unsubstantiated fears that the virus jumped from China via these neighborhoods

The term “community” might ordinarily be used to describe a large grouping of people who live and trade with each other. However, Dittigen said he doesn’t feel uncomfortable using the term. Dittigen said Derrick Avenue and its surrounding area can be described as little groupings of people who migrated at different times, and came with their own identities.

This is evident on the street. While the arch might proudly proclaim that it is ChinaTown, the street is an intersection of many different people. On one corner of the street, there is a huge halal butchery run by a South Asian immigrant. There is also the sidewalk vendor selling stone sculptures of South Africa’s Big 5. Then there is the food cart selling pap and vleis. Most of the store owners are Chinese or East Asian immigrants. However, the people who work at the shops are migrants from various countries in the African continent.

Derrick Avenue might now be more commonly known as Johannesburg China Town. However, just like much of the South African immigrant landscape, it serves as a melting point of different cultures.