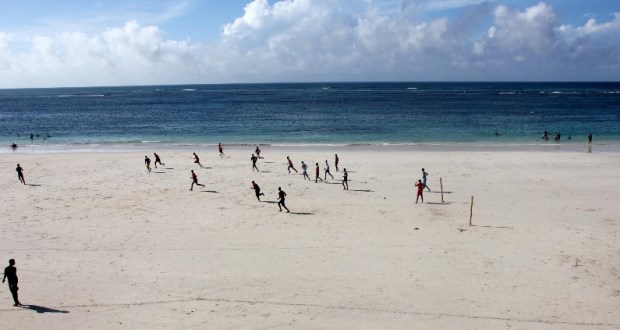 Somali journalist, ABDI LATIF DAHIR describes losing Â a cousin and a friend in the Al-Shabaab attack Lido Beach, Mogadishu, in January, and the sheer persistence of the Somali people who have stayed amidst the violence.Â

As a massive winter storm gathered steam and approached New York last month, I lost my cousin. I lost a very good friend from high school, too. Both Abdirahman Sheikh Bashir and Omar Olad died in the same place, at anÂ attack that targeted a beachside restaurant in the Somali capital, Mogadishu.

When I first learnt of the attack through my Twitter feed, I posted a note of concern for those who were targeted. Lido beach, for those who have visited Somalia, is a symbol of the cityâ€™s comeback. It is a space that captures the rhythmic changes of Mogadishu, and the pulsing beat of a country shedding its war-weary image. â€œStay safe everyone,â€ I wrote, rather naively. Just over twenty minutes later, I went on Twitter again and posted a message of prayer for those caught â€œin this dusk of danger and darkness.â€

A line of prayer in this dusk of danger and darkness. Thinking of Lido. Hope everyone is safe. #Mogadishu #Somalia pic.twitter.com/ceLoQqcSsP

An hour later, I came to know about their deaths through the messaging app, WhatsApp. After the first group of people ran into safety, Abdirahman and Omar couldnâ€™t be accounted for. When the siege ended in the wee hours of the day, family members went back to the restaurant and identified their bodies. Thatâ€™s when my older sister texted me from Nairobi to break the news.

The words on my phoneâ€™s screen reverberated throughout the quiet apartment. I felt the heat at the back of my head rising. Suddenly, the wheels of the cars speeding against the nearby highway came into focus. The stillness of the leafless trees outside was discernible. The world, for a moment, seemed to rise in collective upheaval and violent silence. And the first thing that came to my mind was the last time I saw my cousin Abdirahman.

It was in Lido beach. It was January 11, 2016 â€” eleven days before his death. He was sitting in the same cafÃ© where he was killed. I had traveled to Mogadishu from Nairobi in early January for a reporting project that I was working on. That night, a friend picked me from my hotel, and we went to have dinner together. When we got there, Abdirahman was seated with a group of friends besides the beach. His feet were buried in the sand, and his sandals lay on his side. When I approached him and called his name, he leapt from his chair and gave me a tight hug. â€œI thought you were in New York,â€ he said, â€œI canâ€™t believe this.â€ He was warm and cheery that night, the glint in his eye showing content. I had dinner with my friend. He finished his, and we bid goodbye.

When we were living in Mogadishu in the late 1990s, Abdirahman was a pillar of strength for my siblings and I. Every weekend, he would come home and help us with our homework: Arabic grammar, science â€” and for me, the much-dreaded algebra equations. He was a person to rely on: shy and reserved, yet a go-getter. Growing up, often times, I saw myself in his image. As a young boy, I remember hating the idea of tucking my shirts. My mother had a hard time convincing me to do that too. Afterwards, she would cajole me by saying, â€œDonâ€™t you want to be like Abdirahman?â€ And when I said, yes, she would add, â€œThen tuck in your shirt.â€ I almost always obliged, even though I disliked it after a while and untucked.

After finishing school, Abdirahman went abroad to study agrochemistry, and went on to complete a masters in agronomics. He recently returned to Somalia to be part of the wave of men and women rebuilding the country. It was amongst those dedicated and driven circles that he met and befriended Omar, my high school friend. Omar was a year ahead of me at Al-Hikma Secondary School in Mogadishu. He was very competitive and sharp, and we always encouraged each other. After he finished, he kept calling our home every now and then, motivating my brother and I to work hard. (We both graduated top of our class that year.) Omar was eloquent, a witty guy with a teethy smile. After high school, he became a teacher, and was a lecturer at Simad University in Mogadishu when he died.

What a tragedy, I thought, that two guys I both admired met by happenstance and died in the same place! The gritty realism of it all dawned on me as inches of snow covered New York that weekend. Looking at the Facebook photos ofÂ Omar and Abdirahman sitting together, posted by friends and family, I thought about the new wave of violence eliminating the countryâ€™s young brains. I remembered my friend, engineer Abdullahi Barre, who was shot in front of his house in Mogadishu in April 2015. I thought about my high school friend, Omar Afrah, who narrowly survived a car explosion. I counted the number of journalists, businessmen, aid workers, teachers and lawmakers that I knew who were killed in the last few years.

The violence that currently dominates Somalia is as much physical and emotional as it is gruesome and ghastly. Those who have the will and the way are either hiding in buildings behind HESCO barriers or leaving the country. Yet nobody is fully safe. Nonetheless, through an unyielding veneer of persistence, people in Mogadishu wake up and go to work every morning. They defy the violence, and try to run normal lives â€” until they donâ€™t. Many have a Panglossian view of the city â€” optimistic and determined despite all the hard circumstances. Yet, it is hard to ignore the toll left behind by these sporadic attacks, not pitting one warlord against the other, but bright young men and women against those determined to reverse the gains of the last few years.

I sit here today, writing this, thinking about Abdirahmanâ€™s wife. On February 4, she gave birth to their third child. She was named Bushra: good tidings.