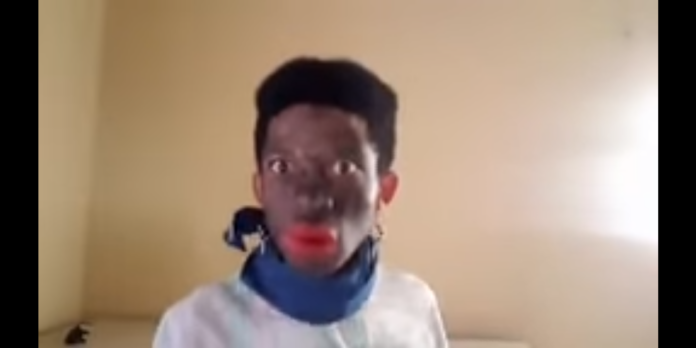 After seeing a viral video of Batswana comedian, William Last KRM, a question of whether black people or people of colour can be racist became a question worth asking. Standards of beauty continue to be defined by white or lighter-skinned gatekeepers of beauty. Still, seldom does one find black, dark-skinned dolls in stores and seldom are darker skinned women seen gracing magazine covers and film screens; unless the theme is ‘exotic African queen’ or something problematic like that. It is for this reason that seeing entertainers lighten their skin is problematic and, worse, seeing William don blackface for a skit becomes that much more infuriating.

While on Facebook, I came across a video of William Last KRM donning blackface and singing along to Lilizela Mlilizeli by the Mahotella Queens.

Unlike most people I saw in the reactions and comment section, my first reaction was not an ‘LOL’ or laughing emoji. What came to my mind immediately was: is this blackface? I cringed, watched the video to completion and read the comments. I wanted badly for someone to ask on my behalf, ‘is this blackface, is this racism?’ My discomfort with the video seemed to be my own until I asked close friends who were equally taken aback by the blackface. Something is clearly wrong with this video and to understand what it is, one must first delve into colourism, racism, and blackface.

Black people cannot be racist because we do not have the institutional, social and historical power that our non-black friends have. We do not have all the benefits that fall under the umbrella term: white privilege. However, this does not mean brown/people of colour cannot be problematic.

Discrimination on the basis of colour among people of colour is a thing. Colourism is a real problem. Historically and today, being lighter skinned has been beneficial. From racial passing to coloured identifying people being slightly above black people during apartheid racial stratifications, being lighter has had its perks and this continues to be true. In Hollywood, lighter skinned actresses seem to get acting roles easier than their darker skinned colleagues. Game of Thrones star Nathalie Emmanual indicated that she would refuse to play the role of Princess Tiana, after being fan cast, saying that the role would be better suited to go to a more “melanated” actress. Emmanual shows that she is aware of the colourism in Hollywood.

Unfortunately, Zoe Saldana did not have the same frame of thinking in 2016 when she took on the role of Nina Simone in the biopic, Nina. What made this worse is that the light-skinned actress distastefully had to don blackface and a prosthetic nose to play the role, sparking much debate and controversy. Nina Simone was a dark-skinned beauty and superstar, and unashamedly so. Having her played by a light-skinned actress was a slap in the face to the person that Nina was: a powerful, fierce black woman.

In South Africa, skin bleaching is popular among our female celebrities. From Khanyi Mbau to Sorisha Naidoo, different methods of skin bleaching to appear lighter has taken place. This while medical professionals would really have people not bleach their skin as it may do more damage than good.

The World Health Organisation (WHO) released an assessment showing that 35% of South Africans use skin bleaching products and 77% of Nigerians do as well. Celebrities like Mbau doing the same while in the limelight, perpetuate problematic standards of beauty being synonymous with light skin. Light skin privilege, because of this, becomes a thing. It is easier for lighter skinned people to get employed, to be models and actresses. To be considered beautiful. Where this comes from, is racism and colonial studies of race.

Being light-skinned means being closer to whiteness, to passing, to racial ambiguity and what all of that means is simply: less black. Colourism among black people has meant, for too long, that darker skinned people get bullied and sidelined, it has meant being overlooked. Being dark skinned has come with attachments: hood, ratchet, exotic, ugly, primitive and all the terms, too many to list, of derogatory terms and phrases used to tease and bully dark-skinned people.  It is, even today, easier to be light-skinned than dark. Maybe even more so now with the prevalence of social media apps like Instagram and Snapchat.

Then, there’s blackface. When I saw William’s video and nothing was being said about his blackface, I was slightly unsurprised that nothing was being said. South Africa, after all, let Leon Schuster get away with making a career of blackface and caricaturing brown cultures. If we could laugh at Mama Jack, why not William’s video? Last year, Schuster said he would not don blackface again in an interview but indicated he will not stop making comedy out of racial stereotypes.

The purpose of blackface has always been to perpetuate stereotypes of black people and caricaturing black lives; it also meant excluding black people from theatrical and film productions historically. So, when I saw the video by Williams, I wondered, who is this? No, not who Williams is but who he is putting on. The caption of the video on YouTube says “When you finally realize that it’s actually Lilizela Mlilizela not Ninizela” and I thought, is that who that is? Is the blackface meant to symbolise the person who makes that mistake? What does that mean to say about dark-skinned people? In the video, Williams is singing along to the song by the classic South African group (Mahotella Queens) but what purpose does the blackface serve and why the problematic gestures? What it seems to be is just a caricaturing of black women for comedic effect. From the blackface, red lips, gestures to women’s earrings; the video is a purposeful mockery of dark-skinned women.

When it comes to colourism, the binary position of dark-skinned women and light skinned women seems to be that the latter comes close enough to the standard of beauty and the former is grounds for racist mockery and caricaturing for entertainment and comedic effect. I speak of women because colourism, while it does affect men too, seems to affect women more. This, because, men themselves are also gatekeepers of beauty standards and also tend to prefer lighter skinned women; be it affluent black men dating white women or lighter skinned women, the exclusion of darker skinned women by black men has also had its fair share of debate and problematising. In realising all of this, the answers to my initial questions in viewing the video become clear. While it is not racist, becomes Williams is not white, it is colourism and it is blackface; it is problematic. Especially because he is naturally very light skinned. My initial response to the video and not finding it funny is justified in that there is nothing hilarious about blackface and caricaturing dark-skinned women.