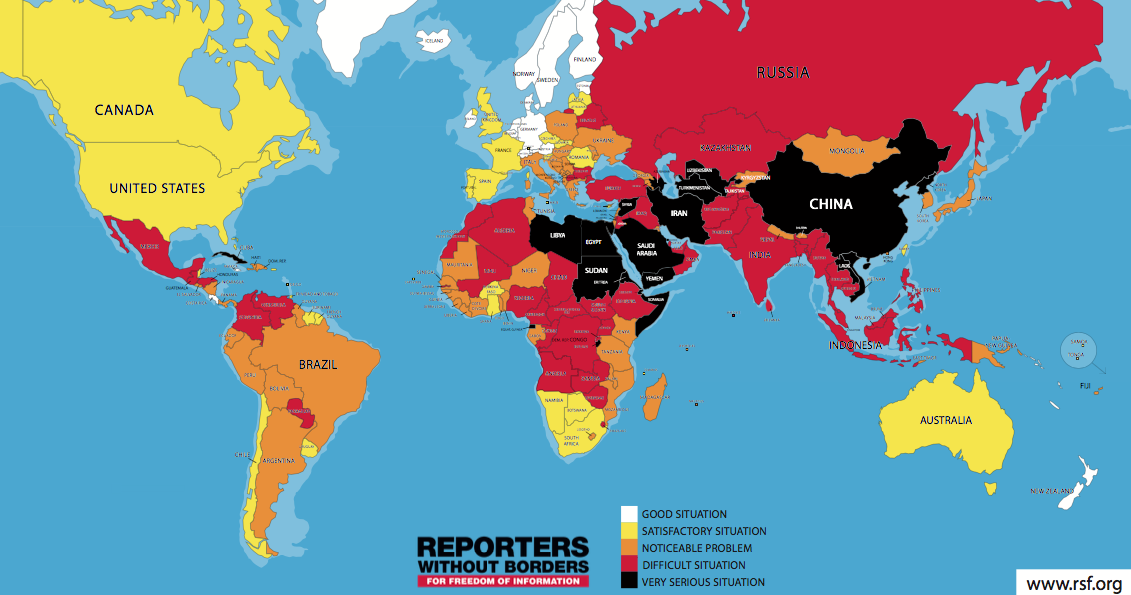 3 May is World Press Freedom Day. South Africa is ranked 31st out of 180 countries on the Reporters Without Borders world press freedom index, which measures the level of freedom available to journalists in various countries. It evaluates â€œpluralism, independence of the media, quality of legislative framework and safety of journalists in each country.â€ Although the South African press has its challenges, many journalists around the world do not enjoy the freedoms we do.

The Daily Vox spoke to journalists from around the world about their experiences and the freedom of press in their country. Sanna Camara, 36, The Gambia
The situation here has immensely improved since the fall of [former president] Yahya Jammeh.
I fled my country three years ago after threat of imprisonment over a human trafficking story I began investigating but am now back. The new government pledged to make the environment better for journalists, give [journalism] practitioners the status deserving of national respect and recognition as fourth estate. A consultative process has begun to reform laws, strengthen capacities to enable the media from its weakened status under Jammeh’s 22 year rule.

The Gambia is ranked at 143 out of 180 countries in the Reporters Without Borders press freedom index. Abena Asiedua Tenkorang, 32, Ghana
Journalists in Ghana can actually go anywhere and write about anything and anyone. The only challenge we face is getting information, especially from the government. Last year for instance, there was an investigative piece on the former president by a journalist which led to the president being investigated by the Commission on Human Rights and Administrative Justice.

So if one can even investigate a sitting president, then I want to think we are very free in doing our work. The difficulty is how information, data, statistics etc that should necessarily be in the public are hidden. That one has to go through a hectic time to get them. Sometimes, they are not even well documented.

Ghana is ranked at 26 out of 180 countries in the Reporters Without Borders press freedom index. Sorin Furcoi, 35, Romania
A large part of the media functions as propaganda tools of some political actors or big corporation, as most media outlets are owned by big corporations or political actors. Generally journalists are bound by the need to be employed when it comes to the freedom of doing their job. There are also accusations that the Romanian National Audiovisual Council tolerated and encouraged such behaviour by not taking action against those who violate the audiovisual code or applying mild sanctions. At the same time, the evolution of quality journalism is remarkable, especially in reporting and investigative areas.

Romania is ranked at 46 out of 180 countries in the Reporters Without Borders press freedom index. TÃ¼rkmen Terzi, 37, Turkey
The press is not free, the Turkish government took over almost all the media in Turkey. Almost 250 journalists were jailed. I used to represent some of the biggest newspapers in Turkey but the government took over the media before the coup [attempt] in March. There is now a state of emergency, and the Turkish government is arresting all journalists, jailing them without indictment, just because of a tweet or even a retweet. Very prominent journalists are in jail.

So many journalists have left Turkey. Most of my old colleagues and editors are in jail, some are in self-exile. I am also in South Africa. you could say that Iâ€™m self-exiled because I cannot go back to my country.

Turkey is ranked 155 at out of 180 countries in the Reporters Without Borders press freedom index. Showkat Shafi, India
Journalists are vulnerable in South Asia. There is hardly any country in this part of world where journalist are safe. Press freedom is a joke here. I have been personally beaten twice while performing my duty. We have to wait for a long long time till we see press freedom here. The government is scared of the truth.

India is ranked at 136 out of 180 countries in the Reporters Without Borders press freedom index.