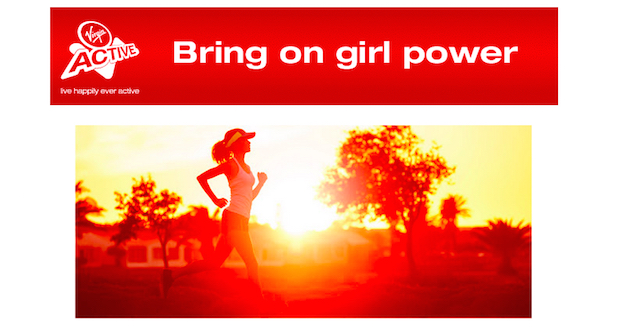 So, in case you missed the subliminal messaging in all the spa specials and florists discounts, Women’s Month is on the horizon. And that of course means all the usual violence and discrimination but with a few empty gestures and misguided campaigns thrown in for good measure.

To kick us off, we have this email campaign from Virgin Active gyms, which is preparing to “celebrate women this month” – by exhorting woman to “switch to woman mode” (from what, they don’t say) and also to “bring on girl power”. That is, while simultaneously asking men to “man up” because it’s also “man time”. Talk about speaking with a forked tongue.

Let’s leave aside the idea that maybe it would be nice to also ask men to consider women’s month or the fact that this campaign basically tells woman that they aren’t womaning correctly and tells men that they aren’t manly enough. How about we stopÂ perpetuatingÂ gender binaries -Â the idea that men and women are “distinct, opposite and disconnected” – andÂ allow men and women to express themselves however they feel?

A guide to protecting your big ideas in 2020