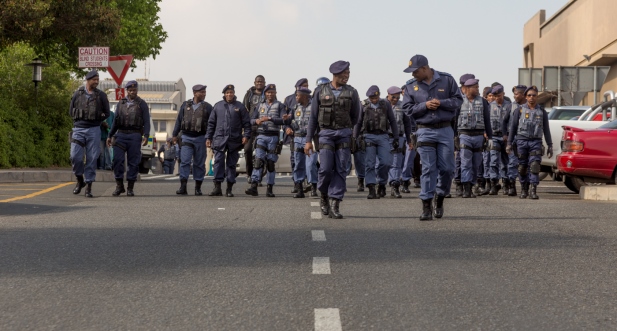 I donâ€™t think it was Stockholm Syndrome. But on Tuesday, after being put in a chokehold by a police officer for running my mouth off about press freedom, I ended up developing an easy camaraderie with officers at the Hillbrow police station.

We became pretty good friends, mostly through trading banter. They found my anti-authority vibe hella funny to play off of and kept teasing me about staying at the station after being released, asking if I was that desperate to get arrested again. I told them they could put me back in the cell so long as they gave me their WiFi code and let me interview the folks inside on police brutality. It was a somewhat twisted, but deeply amusing situation, and as the day wore on I got to know a few of them more personally.

This was an odd situation for me because Iâ€™ve always seen the police as hypermasculine, intimidating, bloodthirsty, legitimised thugs, who look for bribes or use their positions to exert unnecessary force on people. But on Tuesday, while spending hours at the police station, I got to see beyond the popular perception.

I later bumped into some of the same officers on Wits East campus after the stone throwing that took place on the piazza outside the Great Hall. The incident was sparked when students, frustrated at being denied access to Solomon Mahlangu House by private security, started breaking dustbins and throwing rocks at the security guards blocking the entrance. The security guards, in turn, began throwing those same rocks back at students. Things got bloody but eventually calmed down and students accessed the entrance to Solomon House.

When I arrived on the scene, police officers from Hillbrow called out to me, asking whether I was okay and why I was always in the middle of trouble. “You need to get a girlfriend or something to calm you down, keep you out of nonsense,” one officer shouted. By this point, I really started to feel Iâ€™d endeared myself to them.

I could tell that having a good rapport with a youth in the context of these protests was something uncommon that they appreciated. It was something I appreciated. After all, forming platonic bonds with people is probably one of the most natural human experiences.

After several mass meetings – which largely lacked direction and clear leadership, and resulted in nothing concrete – I sat by the Yale Road bus stop, waiting for an Uber, and thought about my interactions with the police throughout the day.

I became really angry about the way these officers have been turned into intermediaries between us and those in power, protecting the powerful and their interests.

What really gets to me is how it has us fighting people we genuinely have no personal issue with. We don’t even know them. And yes, some are definitely sadistic assholes who get off on being extra with protesters, but if my new friends are anything to go by, some honestly just remind me of my uncles.

As the sun set, I was deep in thought about happens when we’re on the ground and these same officers are placed in direct confrontation with students. How quickly do good relations turn to bitterness due to social placement?

As I wrestled with these injustices, a police car drove by, hooted and a familiar face shouted, â€œHey wena, you! Tomorrow weâ€™re gonna arrest you again since you like Hillbrow so much!â€

â€œThis time try grab me from the front and see if you can catch me with that stomach of yours,â€ I replied.

I waved them off as they left campus, my new friends and accidental enemies.