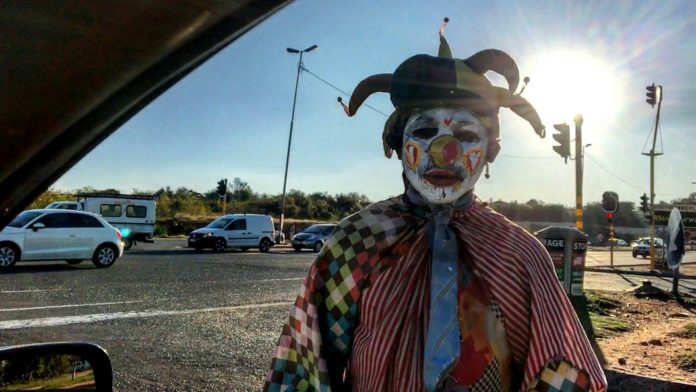 The Johannesburg northern suburbs seem to be turning into one big circus. Pantsula dancers, jugglers on unicycles and clowns – well, men dressed as clowns minus the routine – all trying to make a quick buck while traffic moves at the pace of a mall parking lot on the weekend. “Well, at least they are not asking for a handout,” I’ve heard people say, but that it has got to a point where black people literally have to jump through hoops for bread and milk money is about as funny as these so-called clowns (…not at all!), writes ANGELO C. LOUW.

Have we become so immune to black suffering that we easily gaze over it if doesn’t come knocking on our window, juggling balls with one hand?

The fact that poverty among black people has become normalised to a point where we are no longer triggered by it, speaks volumes about where we expect black South Africans to sit in the social order – and there you were thinking aparthied was dead and gone, when it’s done is found a cozy nook in your mind to fester in.

How did this become a race thing? You may ask. Black people aren’t the only ones that are poor, right? Sure; but I certainly don’t see any white youth out there putting on a full-on show for your pocket change. Do you?

Because if these were white kids, you’d hear about it on the news, someone in the world would crowdsource funding for them to go to university, and these talented individuals would end up in a TV ad or two, launching illustrious entertainment careers.

Let’s face it, suburbanites are more likely to give their spare coins (paper money, even) to model C school-goers begging for cash (fundraising, as they call it once your reach a certain social status) to visit Switzerland over the July break than black mothers who are trying to feed their children, because…

“How can they keep those kids out of school like that? Shame man. We mustn’t encourage these women by giving them money.”

Forget the fact that they can barely afford to feed these kids, let alone bus them to school every morning at the risk of missing peak hour traffic; the racist undertone of this sort of thinking places the onus on unemployed black women who have fallen into a vicious cycle of poverty that is structural, widespread and proven by scientific research.

Stereotypes of lazy black people, black entitlement and black hyper-sexuality are at play here – and we all know that stereotypes play an important part in the preservation of power systems, as they create negative stigma around certain groups, making others more desirable.

Don’t get me wrong, public performance is not unique to Joburg; all over the world, people put on shows for tourists: Elvis impersonators on the Las Vegas strip, Masai warriors ready for photo-ops at Kenyan craft markets.

The difference, however, is that these are not our tourism districts and these kids aren’t performing to foreigners with pockets full of spending money; the only thing separating them and their audience is a 20 kilometre commute.

It is perverse that any South African needs to shuck and jive for the entertainment of another in order to make five bucks (< 50c) per traffic light change. Dancing in the heat all day, dressed in thick pantsula overalls, face painted like a clown… all so that wealthy children strapped into overpriced carseats can clap along in the rearview mirror as mommy searches her ashtray for loose change.

Youth unemployment and lack of access to development opportunities is forcing young black South Africans into spectacle for the humour of wealthy suburbanites, and boy do they enjoy a good show. You ever been to an orphanage when funders visit, and see those kids break out into Sarafina-type song – Colgate smiles and jazz hands? Performances so memorable, they stay top of mind during funding renewal cycles.

The gap between the haves and have-nots is mind-boggling for a country so rich in natural resources. Levels of inequality are so high that only 16 people own the same exact amount of wealth as half of the population – that’s over 26 million South Africans!

The worst part of it is that those at the bottom of the spectrum are the ones indigenous to this bountiful land. And as they continue to plummet into hopelessness, as national poverty trends demonstrate, they become more and more vulnerable to the worst type of humiliation.

So, while many marvel at the performers who turn traffic lights into their personal ring curbs, I see a vile display of inequality in South Africa, a Cirque du Soleil of poverty.

Angelo C. Louw is the advocacy officer at Studies in Poverty and Inequality Institute (SPII). He is also a Fulbright/Hubert H. Humphrey Fellowship 2016-2017 awardee. He writes in his personal capacity.