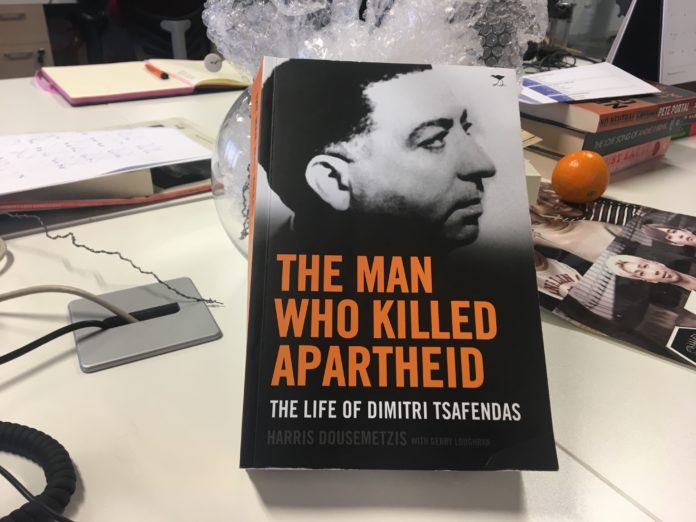 “The Man Who Killed Apartheid” is a book aiming to contribute to “a post-colonial intellectual history of South Africa.” It is book 12 of the African Lives Series edited by Professor Andre Odendaal. Author Harris Dousemetzis said he wrote this book because he thinks cases “where the official verdict whitewashed the apartheid authorities for any blame” need to be reexamined.

“The Man Who Killed Apartheid” is an in-depth story looking at Dimitri Tsafendas, who murdered Hendrik Verwoerd on September 6, 1966. Verwoerd is known as the architect of the apartheid system in South Africa. Tsafendas was labeled as mentally unfit to stand trial for the murder. The apartheid government labeled his actions as not being politically motivated. Tsafendas was subject to extreme torture and cruel behaviour in prison until his death in 1999.

Dousemetzis’ book attempts to dispute the historical account of Tsafendas as presented by the apartheid government.

How important is a project of writing a postcolonial intellectual history of SA?

I believe it is very important for a number of reasons.

It has been widely suspected since 1966, especially among those who were aware of how the apartheid authorities operated, that Tsafendas was politically motivated. There was no evidence to prove it. It is very similar to the case of Ahmed Timol, or Abdullah Haron where people suspected that they were all murdered by the police. Thus, I think that it is important for South Africa to re-examine a number of cases where the official verdict whitewashed the apartheid authorities for any blame or was one that was preferable to the regime (like Tsafendas’s. And, generally any case that there is even a slight suspicion that the truth might be different from the one given by the apartheid government.

From the point when you heard about Dmitri to actually writing the book, how did your view/ideas of him change?

I first heard of Dimitri shortly after he died. I found this a little suspicious at the time that he was declared to have been a schizophrenic. His obituary suggested that he might have been politically motivated. I got curious and began researching. Initially, I felt some sympathy for him He appeared to be a person that found little happiness in his life, while he was often persecuted for his political beliefs and activism.

Gradually, I discovered that the first part was not really accurate, while the second was far more serious than it was reported. Very crucial to my research was my meeting with some priests who knew Dimitri exceptionally well. Two of them knew him before the assassination and two had got to know him while in prison/hospital. I met those priests quite early in my research and what they told me and the way they talked about Tsafendas was crucial in beginning this project. They admired him and  talked about him in the highest possible terms. Although three of them strongly condemned the assassination.

My views about Tsafendas gradually changed from sympathy to admiration. I felt that a major historical injustice had taken place and I became determined to set the record straight.

Personally, what did it mean for you to tell the story?

Once I knew the truth about Tsafendas, I felt that it became my duty to tell his real story, and to correct the historical record. Tsafendas told the priests that he felt it was his duty to stop Verwoerd from committing this crime that affected so many millions of people. I somehow felt the same. I felt that it was my duty one I found out the truth to tell about it. I became determined to succeed in correcting the historical record.

How long did the research process take beyond 10 years?

The research began in early 2009. This is when I began trying to find people who knew Tsafendas and to access various archival records around the world.  I first spoke to three of the four priests mentioned earlier in 2008. It was my conversations with them and with Alexander Moumbaris that made me decide to carry out an extensive research on the subject. I finished most of the writing of my report to the Minister in 2017. It then took about a year for the five jurists I was collaborating to read it and double-check and evaluate the evidence I had gathered. During this time, I began writing the book.

What do you want people to think about Tsafendas?

I just want them to acknowledge that he killed Verwoerd for political reasons and not because of a tapeworm. As Edward Furness, a South African witness questioned by the SA police shortly after the assassination, told the police, Tsafendas was a man who was willing “to do anything that will get the South African regime out of power”. Tsafendas told the police when he was interrogated after the assassination he had killed Verwoerd because he “hoped that a change of policy would take place.” He later told the priests who were visiting him in prison exactly the same thing. He considered Verwoerd to be the ‘brains behind apartheid’ and he hoped that apartheid would sooner or later collapse without him in charge. Thus, that his act was political and not a mindless one.

Take me through the title?

One of the first ever articles I’ve read about Tsafendas in the Greek press, Eleftherotipia was entitled “The man who killed apartheid”. Thus, this title was always in my mind for a title of a book about Tsafendas.

It does not mean that Tsafendas ended apartheid, but that he killed it. What I mean is that Verwoerd at the time was seen in the world as the man behind apartheid. He was rightly and widely known as “the architect of apartheid.” There have not been many political systems so closely identified with a politician as that of apartheid with Verwoerd. Thus, what I am trying to say is that Tsafendas did kill apartheid/Verwoerd, but of course he did not end apartheid.

I understand that some people found the title to be misleading but this was not my intention and this is not what I meant. I should have clarified what I meant with the title inside the book so there will be no misunderstandings.

The Man Who Killed Apartheid is published by Jacana Media and available at all good bookstores and online.