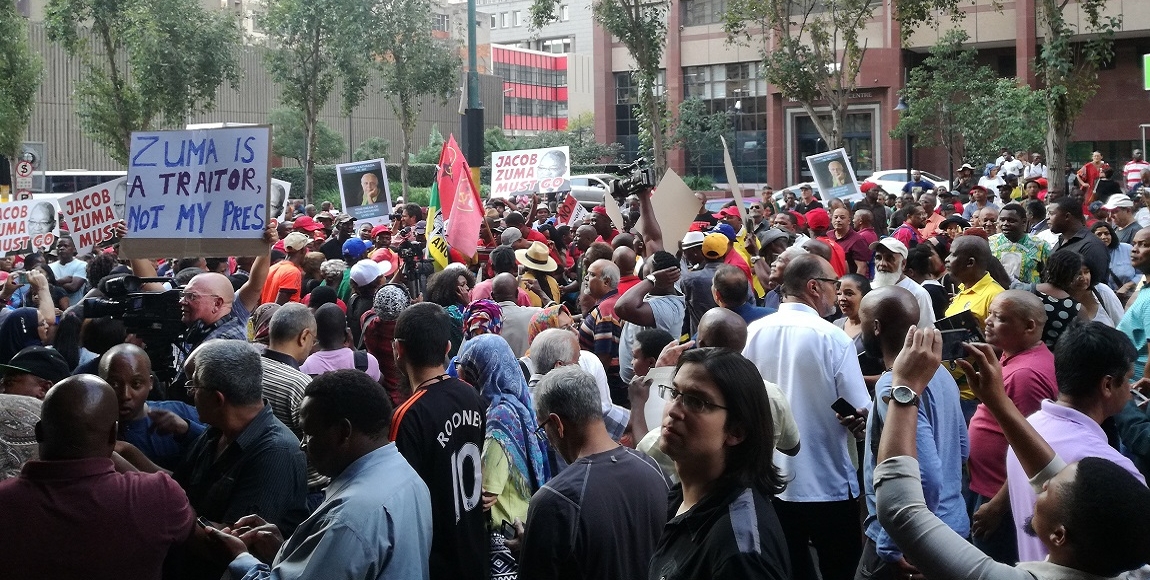 The memorial service took place just days after President Jacob Zumaâ€™s controversial cabinet reshuffle, where he axed five ministers and reshuffled several more. The atmosphere at the memorial was charged, struggle songs peppered with â€œPhantsi Zuma” and thunderous applause reverberated through the hall.

Speaking at the memorial service, recently ousted finance minister, Pravin Gordhan, called on South Africans to mobilise against Zuma. “I am unashamedly encouraging mass mobilisation,” he said, “We need to get this organisation of ours into a shape that shows we are truly a peopleâ€™s movement.”

According to Gordhan, a number of the ruling partyâ€™s top leadership were unaware of the cabinet reshuffle.

Gordhan: Deputy President, Treasury and Secretary Generals of the ANC did not know of #cabinetreshuffle. #AhmedKathradaMemorial

Gordhan: We need to ask, what would Kathy the activist do if he found himself is this crisis? #AhmedKathradaMemorial

Gordhan: Kathy would say it is time to unite and fight the weaknesses in our movement. #AhmedKathradaMemorial

Gordhan was clear that the ANC and South Africaâ€™s democracy are in a â€œmini crisisâ€ and that South Africans should unite to hold government accountable.

Gordhan: Comrade Kathy leaves us a time when society finds itself in a crisis. Who and what the problem is, is clear #AhmedKathradaMemorial

Kathradaâ€™s widow and struggle stalwart in her own right, Barbara Hogan, also called for Zuma to step down and lambasted his current government, saying that Zuma had sacrificed everything the ANC stood for.

Hogan says Zuma should step down and the crowd goes wild! #AhmedKathradaMemorial

Neeshan Balton, the director of the Ahmed Kathrada Foundation, also called for various South African movements to mobilise against the current government.

The state memorial was supposed to be held in Soweto on Saturday, with Cyril Ramaphosa giving the address. According to government communications, the state cancelled the memorial service because it could not come to agreement with the family.

Zuma did not attend the funeral on Wednesday and would not have attended the memorial service either in compliance with the wishes of the Kathrada family.