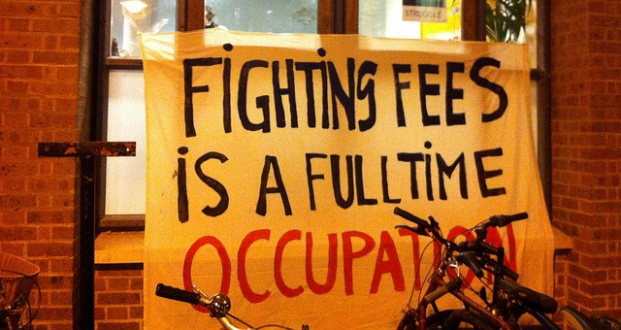 As township struggle seeps into elite spaces such as the university, many privileged academics and university managers have become terrified of what they perceive as ‘uncivil’ protest. JARED SACKS responds to Professor Achille Mbembe’s recent criticisms of student politics.

A few months ago, I read the famous exchange of letters between Theodor Adorno and Herbert Marcuse. The debate was sent to me by a professor at the School of Oriental and African Studies (SOAS), University of London. He meant to challenge me, and my fellow protesters,Â Â to think more deeply while we sat in occupation of the university’s premier corporate events room: The Brunei Suite.

Our occupation began in response to the university’s plan to cut 184 courses as part of a Â£6.5 million restructuring. Britain is currently in the throes of massive academic austerity cuts that have resulted in student fees being raised to over Â£9,000 per year from being free as recently as 1998. Yet, SOAS’s proposed new cuts are entirely unnecessary: the university has generated significant surpluses during five out of Â the six past years. Moreover, without new cuts at the national level (for the time being at least), management cannot in fact justify the massive cuts to this tiny specialist university.

That is, they cannot justify the cuts except through the use of garnished PowerPoint presentations that easily mislead those of us untrained in tricks of mathematical misrepresentation.

And so, dozens of students occupied the Brunei Suite â€“ the logic being that disrupting this lucrative venue for the university would not only force the administration into negotiations with students and workers, but also assert the primacy of the university community in the face of top-down managerialism.

In his analysis of the debate between Adorno and Marcuse, Achille Mbembe passes over an important insight to be drawn from the exchange: the positionality of the two philosophers. It is certainly problematic to fetishise positionality â€“ a concept speaking to the effect that identity has on our ability to see and understand things from other perspectives. Yet, Adorno is quite clear about why he is so perturbed by the student protests:

â€œAfter all, I have to look out for the interests of the Instituteâ€”our old Institute, Herbertâ€”and these interests would be directly endangered by such a circus, believe me: the prevailing tendency to block any subsidies coming to us would grow acutely.â€

In other words, Adorno has positioned himself within the university management â€“ a role the places his managerial responsibilities and, in particular, the need for funding, at the core of his anxieties. It is therefore unsurprising that this intellectual would pledge his allegiance to the institution rather than threaten his life’s work to back the students.

This is not to say that identity is something essentialist; that one cannot ally oneself with the oppressed against one’s self-interest. Indeed, Marcuse, through taking theory and practice seriously, is at least able to challenge his own prejudices â€“ that of his position above the students in the hierarchical university, and perhaps that of his age as well.

Adorno laments the student’s challenge to his academic authority: â€œHere in Frankfurt, and certainly in Berlin as well, the word â€˜professorâ€™ is used condescendingly to dismiss peopleâ€. But one might also ask, what gives Adorno the right to demand respect from students merely due to his title rather than earning respect through his actions? When the students chose to take Adorno’s institution on directly through occupation, were they not also asserting their equality – an implicit critique of the problematic dichotomy between student and teacher?

In reality, actions, however problematic, speak louder than theory.

Peppered through Adorno and Marcuse’s letters, therefore, is the question of privilege. Common to such privilege is disdain for the unpalatable tactics of resistance of from below. This was the case during our protest at SOAS where a range of upper-management and academic deans publicly denounced the tactic of occupation as disruptive and undemocratic. They also, however, implicitly exposed their own privilege and career interests.

The same is true in the aftermath of the massive #RhodesMustFall and #FeesMustFall mobilisations in South Africa which has incurred its own backlash. As township struggle seeps into elite spaces such as the university, many privileged academics and university managers have become terrified of what they perceive as ‘uncivil’ protest. Their middle class sensibilities instead being accustomed only to ‘official’ and ‘sophisticated’ forms of power and violence â€“ that of economic exploitation, structural racism, and the militarisation of space.

In fact, the student disorder is nothing compared to the vicious repression that VC Pretorius sanctioned at the University of the Western Cape, the mass arrests of hundreds of peaceful protesters at the University of Johannesburg, or the violent displays of masculine authority which VC Habib currently has on display at Wits University.

Absurdly, one of the key contentions in the debate between Adorno and Marcuse is who would meet whom in their respective favourite Swiss resort towns. While the dispute has much to do with Adorno’s failing health, the fact that such a preoccupation exists, juxtaposed with talk of the ‘fascist’ vs ‘transformative’ tendencies of the student protests, reminds us just how entrenched privilege remains even when directly challenged.

Our challenge then, is to recognise our own position and then act within the composition of forces struggling for control of these institutions. Just as the youth of ’68 had much to teach the old philosophers caught off guard by the student uprisings, the youth of today have laid bare privilege for all to see. Whether it is the patriarchy of the male-dominated academy, the racism of the colonial university, or the violent authoritarian practices of the vice chancellors, we all owe a debt to the students, as well as the non-academic and academic workers who have join them in struggle.

This is the real lesson that Adorno and Marcuse can teach us â€“ though perhaps it is only visible if one reads between the lines from a student-activist perspective.

Jared Sacks is freelance journalist and writer from South Africa and founder of a children’s non-profit organisation. He is currently studying at SOAS, University of London.