Home Online Chatter Was this a kidnapping attempt at the Mall of the South in...
WhatsApp
Facebook
Twitter
Email
Print 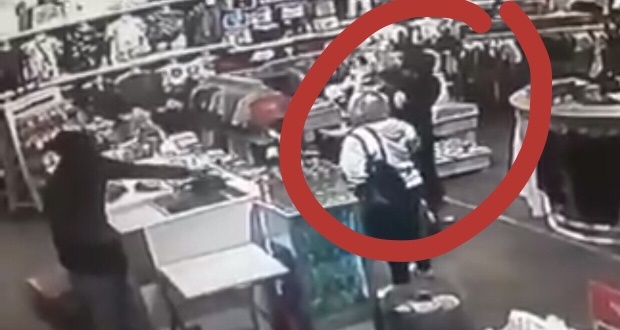 A video showcasing the attempted kidnapping of a two-year-old girl at shopping centre Mall of the South has gone viral. Jennylee Jordaan, the mother of the child posted the video of the incident, which occurred on Tuesday, on her Facebook page.

Taken from CCTV footage, the video shows Jordaan looking through a rack while her daughter sits in the trolley. In a very quick movement, a figure skulks from behind and attempts to lift Jordaanâ€™s daughter out of the trolley. As soon as Jordaan turns around, the man puts the child back down, appearing to make as though he is adjusting her in the trolley.

Jordaan posted on Facebook that initially it hadn’t seem amiss, but she was unsettled and went back to review the storeâ€™s CCTV footage – which confirmed her worst fears.

The caption of the video read:

We always think these things will never happen to us…
In Mall of the South yesterday(26 July 2016) a man tried to take my 2 year old daughter out of my trolley, when she noticed she didn’t know the person picking her up she immediately said mommy… that’s when I looked. At that moment this man made it seem like he was helping her sit properly in the trolley. Which seemed like it could’ve been the case because she did stand up a few times in the trolley.

My instinct told me otherwise and I went to get the camera footage this morning.
My worst nightmare nearly came true… please please watch your kiddies closely in the shops… I dont know what I would have done if he’d taken her… ðŸ˜”

When contacted by The Daily Vox, a Mall of the South representative said that they could not provide any comment due to the fact that the incident occurred in-store and was therefore not something the mall management could comment on.

According to SAPS Gauteng Provincial Spokesperson Lieutenant Colonel Lungelo Dlamini, kidnapping is an unusual crime in South Africa. “Kidnapping is not currently a problem. When a kidnapping happens, there is usually a certain motive. It doesn’t just happen. Unfortunately it’s usually rape, when it comes to girls and young ladies, and sometimes also for things like ransom. There aren’t any patterns though. It’s not a common crime.”