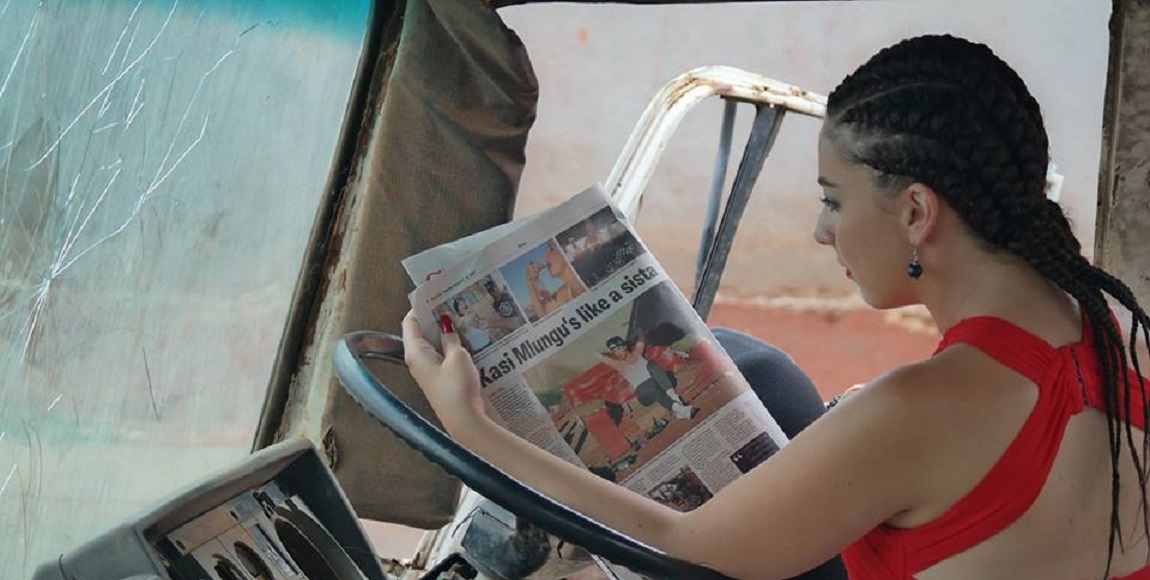 Wouldnâ€™t it be nice if I woke up tomorrow morning and decided from now on I am white? I would be â€˜The black whiteâ€™ and no one would criticise me for not being white enough. Would it be that simple? I donâ€™t think so.

Kasi Mlungu, real name Anita Ronge – a commercial house music DJ, known as DJ DuchAz, who performs mostly in townships – says she can be whatever she wants. She also says she is often criticised for not being black enough. This has made black people angry, and our anger is justified.

I get rejected for not being “black enough” and being “too black” to be white… I’m #KasiMlungu & I’m proud. pic.twitter.com/DzEM9Cgwc1

If you understand systematic oppression and what it means to be black in South Africa, you would understand why Rongeâ€™s brand is problematic. I say â€œbrandâ€ here because she herself admits what she is portraying is a brand. But why wouldnâ€™t it be simple for me to wake up tomorrow saying I am white?

Because as a black person in South Africa, I cannot choose who I want to be – as Ronge as repeatedly argued she can. In the same breath, sheÂ told 702 listeners she does not believe she has white privilege. The contradictions of her statements are appalling, to say the least, and itâ€™s because of this that black people are angry.

If I decided I was white tomorrow, would society treat me as such? Rongeâ€™s assertion that she is attacked for not being black enough is disrespectful because she is not black. What would treating her as black person look like? Do her lived experiences mirror those of black people?

Her idea that she is proudly black is an insult to black people and black liberation. Being a black person is not an outfit or attire white people can wear when they see fit, itâ€™s the hardest thing I myself have ever had to be.

Blackness comes with socio-economic circumstances, which black people cannot escape. If I was to classify myself as a white person, society would never accept this – we have seen this through the continuous criticism of what our society calls â€œcoconutsâ€. Black people who try to assimilate to whiteness and reject their own culture and background are scrutinised by society.

If this is the case, why do people like Ronge who masquerade blackness get a free pass?

Going through the social media outrage, I came across people who suggested itâ€™s a double standard for black people to be angry at Ronge while they themselves practise western culture. If this is not a denial of the power that colonialism and apartheid had, I donâ€™t know what else it is.

Black peopleâ€™s assimilation to western – or if you can call it, white – culture is not a double standard, but a means of survival in an inherently anti-black society. If speaking English better than my peers in the rural areas of South Africa can get me a job, why wouldnâ€™t I do my best to learn and speak it as best as I can? If straight hair and light skin have been the only standard of beauty that we have been exposed to from childhood, why wouldnâ€™t I get a weave? Are we going to deny that blackness has been systematically rejected by society just because we want to give a free pass to white people? I say not.

Rongeâ€™s expression of her love for African culture and how she has embraced township culture and feels accepted by Africans is not the issue. The issue is the fact that she uses it to further her career in black spaces and justifies doing so.

Images of Ronge draped in African regalia are also problematic because they are used to give more flavour to her â€œKasi Mlunguâ€ persona, which results into a blackface scenario. She also does not learn their real use and incorrectly places garments together. African cultural attires are not fused into one simple attire that can just be paraded. They have deeper meanings to them and are used for different cultural practices and ceremonies.

This colourblind approach to dealing with racism only seeks to fuel it.

Every time I spell something wrong in English or make a grammatical error, I am corrected as quickly (and condescendingly) as possible; one white person once said to me: â€œIf you are going to use English, rather get it rightâ€. How many times are black people laughed at for speaking and writing English incorrectly? Let alone Afrikaans? Yet, itâ€™s acceptable in South Africa for a white Afrikaans woman to wear African attire incorrectly. Even black people get corrected for wearing their own cultural attires incorrectly but when a white person is corrected, apparently we are being racist. When will this stop?

I have no problem with Ronge being a commercial house DJ, and I think a lot of black people would agree with me on this. I enjoy a fair amount of house music and know of a lot of white DJs – but I have a problem with her suggesting that hanging out with black people and frequenting the townships makes her black and takes away her white privilege.

House music isnâ€™t inherently black. It started in a Chicago club called The Warehouse, opened by DJ Frankie Knuckles. He mixed old disco classics and new Eurobeat pop. House was the first direct descendant of the 70s disco movement, being deeper, more raw, and more designed to make people dance than the poppy nature of disco. Basically, it has no race attached to it. When it came to South Africa, it was the beat that spoke to the black people in kasi. But being a House DJ doesnâ€™t mean you have to be black.

If we want to end racism, we need to be honest about the past and the lingering systematic oppression that carries on in South Africa, despite 23 years of democracy. We cannot erase 55 years of oppression by using a colourblind approach – it erases lived experiences and gives rise to personas like Kasi Mlungu, who only use blackness to further their own careers.

White people have a responsibility in this country, to be honest about their privilege and use it to correct the wrongs of the past.

The rainbow nation idea to our democracy sounded beautiful in the beginning, but it has proven to add more insult to injury than heal the wounds of the past, due to the systematic exclusion from the economy that the majority of black South Africans still have to endure. Itâ€™s something we can no longer ignore.