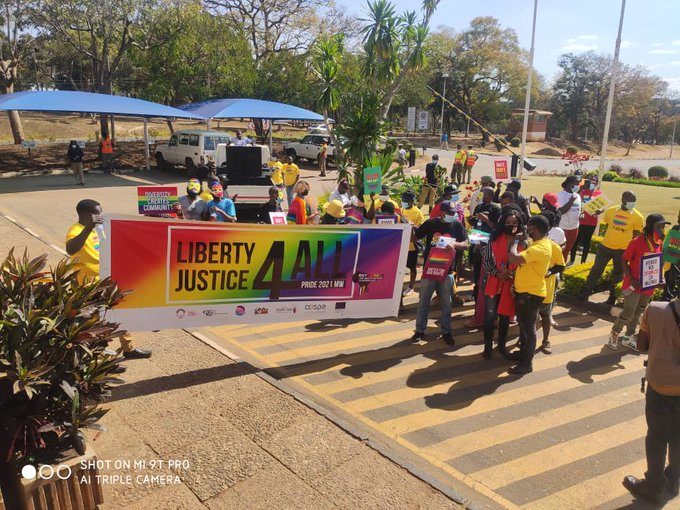 Malawi held its first-ever pride parade on June 26 2021 to end off global Pride Month celebrations, The pride march was groundbreaking in that homosexuality is still a criminal offence in Malawi.

The march took place through the streets of Lilongwe, Malawi’s capital. At the end of the march, organisers handed city officials a petition. The petition called on the government to provide detailed government recognition, protection for the LGBTI community, same sex marriage legalisation, and improvement in access to healthcare.

The march was led by Nyasa Rainbow Alliance, a Lesbian, Gay, Bisexual, Transgender and Intersex organisation. Hudson Kuphanga, a senior city council member, received the petition and he told the organisers it would reach the office of the president and cabinet.

Nyasa Rainbow Alliance said sexual minorities in Malawi are always in danger. “LGBQTI people in Malawi are subjected to many forms of violence. The laws on homoseuality must be reviewed and reformed to protect LGBQTI people from discrimination, violence, stigma and ensure equal access to healthcare.”

Speaking to The Guardian Andreas, 29, said it was a huge and happy moment for his community. “I feel so happy to be part of this. To be a gay in Malawi is tough and it takes a lot of guts to be open like I am. I have been through a lot, including insults and discrimination. I’m lucky that I have a loving family which accepts me the way I am.” he said.

Chrispine, 30, was thrown out of his family home at 18 when his sexuality was discovered.

“It was hard for me because no one wanted to associate with me. I was really depressed. Even in the political space I am not represented and am not allowed to have my say. I think this is historic and the moment we have been longing for. I know in the past we would not be able to do this.” he said

Read more: #LGBQTILife: The Pocket Queerpedia is an educational resource for understanding queerness

Sexual activity between two men in Malawi carries a prison term of 8 to 14 years. Many LGBQTIA+ Malawians face police brutality, arbitrary arrests and discrimination in all aspects of their lives, according to a 2018 Human Rights Watch survey report. In 2012, Malawi banned sodomy convictions. But in 2016, the Malawian high court reinstated penalties for homosexuality.

The anti-LGBQTIA+ laws in Africa date back to colonialism. The penal code was a set of laws that made being gay a criminal offense. Britian decriminalised homosexuality in 1967 but it exported laws remained in its former colonies – institutionalising homophobia.

Only 22 of 54 African nations have legalised homosexuality. In four countries (Mauritania, South Sudan, Somalia and sharia law Nigerian states) it is punishable by death, while in some countries it is punishable by imprisonment. In 2006, South Africa became the first African nation to legalise same-sex marriages, and still remains the only one. South Africa’s constitution protects against sexual orientation discrimination –  and in 2020 the Civil Union Amendment Act  was passed into law that prohibits marriage officers from refusing to conduct same-sex marriages.

South Africa’s progressive laws are welcomed and contribute to the healthy and safety of LGBQTIA+ commuities but LGBQTIA+ communities still face violence and discrimination. Hate crimes in South Africa are prevalent, and have increased during the pandemic.

Read more: #LGBQTILife: We need to be advocating for more inclusive shelters

In July 2018, eSwatini also held its first-ever pride parade  that was not endorsed by its ruler King Mswati III. In eSwatini, same-sex relationships still remain illegal.  In August 2020 the first pan-African virtual Pride event took place where LGBQTIA+ stories were shared.  The virtual event brought together LGBQTIA+ Africans from across the continent and diaspora to share their experiences of being queer and African.