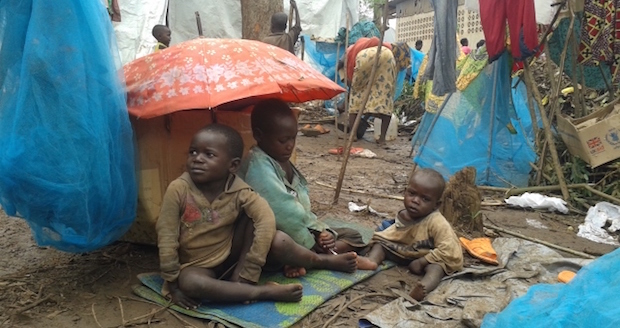 Reporter FAHMIDA MILLER is currently in Rwanda, where she has been speaking with refugees who have fled Burundi for fear of a civil war.Â Among the 11,000 people at the MahamaÂ refugee camp, it is the children who have suffered the most hardship, she writes.

Mahama refugee camp in Rwanda is not the first Iâ€™ve been to inÂ the last few years.

However, this is the first refugee camp Iâ€™ve seen in the early stages of construction, as thousands of Burundian refugees flee their homes, seeking safety in neighbouring Rwanda. Many of the refugees I spoke to had not left Burundi after a specific attack but rather because of intimidation and the fear of what could be.

President Pierre Nkurunziza wants to run for a third term, in contravention of the peace deal that put himÂ in power, not to mention the countryâ€™s constitution. He is also backed by a militant youth wing, known for its violence.

Street protests against Nkurinzizaâ€™s plan have often turned violent, and there have already been seven deaths. Add to this the ethnic dimension, and there is growing international concern for Burundiâ€™s future.

Between 1993 and 2005 the country was ravaged by civil war. Three hundred thousand people were killed, while next door in Rwanda genocide raged on. Whether peopleÂ I spoke to at the camp had been through the trauma of war before or had simply heard stories, they refused to take any chances by staying in their home country.

Counter-intuitively, walking among 11,000 refugees for hours and hearing the same story over and over again can sometimes take away from the gravity of their plight. However, Pascal Nzoyisaba reminded me of the realities of the situation.

Pascal is 12 years old and an orphan. He made the journey to Rwanda on foot with his younger brother. He just recently lost his remaining parent to illness. Pascal says militia told him that his father died because he did not want to vote.

Pascal did not hesitate in leaving Burundi. I spoke to him under the shade of a tree at the camp while he waited for new food rations. The few possessions he had were stolen days before. A 12 year old should not have to display age on his face the way Pascal did.

He said he would only consider going back to Burundi to fetch his grandmother, there was no other reason to return. More thanÂ 50 percent of the refugees at Mahama are children, many of them orphaned. In the last few days, four babies were born at the camp, into a life that is characterised by food rations, plastic tents, filth and hopelessness.

As a journalist, its always the children that make the most impact: their anticipation about why you are there, what you can offer them, their faces, tears and oversized clothes.

While refugee camps have become routine to many journalists, itâ€™s new territory for Pascal Nzoyisaba and thousands of others like him in eastern Rwanda.