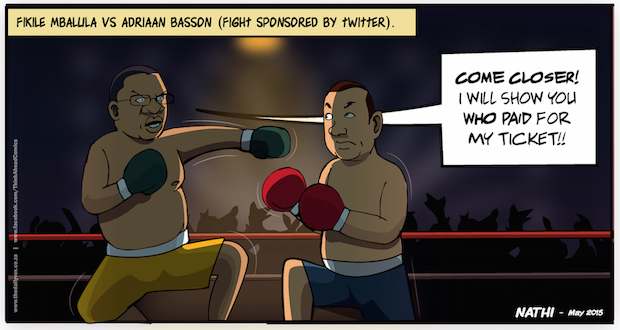 South Africaâ€™s favourite selfie-taking, jetsetting minister, Fikile Mbalula, had seats at the much-hyped Mayweather/Pacquiao fight at the weekend. Billed as the â€œfight of the centuryâ€, tickets apparently cost anywhere between R158,000 and R31,000. Mbalula was happy to tweet about it to his followers but he didn’t take kindly to being asked whoâ€™d paid for the trip.

Mbaks put the smackdown on Beeld editor Adriaan Basson, whoâ€™d fielded the question on Twitter, saying that heâ€™d paid for the tickets himself and that, â€œItâ€™s sad in the new South Africa there are still people like you still believe all blacks are corrupt and eat taxâ€™s money.â€

Basson wasn’t the first orÂ the onlyÂ person to ask whoâ€™d paid for the trip but he bore the brunt of Mbalulaâ€™s ire.

A furious debate ensued over social media with some claiming Basson was policing black wealth and others arguing that he had the right to ask the question.

The question is not unfounded though.Â Who can forget the R6.8-million billed to the state when former everyone-but-able-bodied-men minister Lulu XingwanaÂ took a team of 49 staff on a two week trip to New York.