Home Politics Maimane: ‘The ANC’s funeral will be held in 2019, but it is...
WhatsApp
Facebook
Twitter
Email
Print 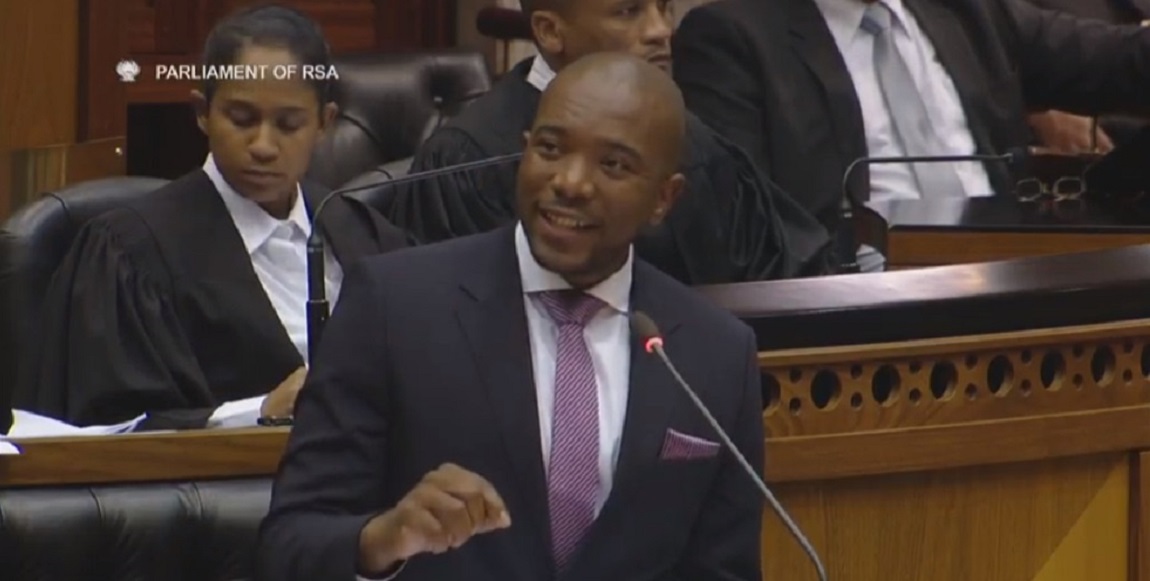 On Wednesday 31 May, the Presidency’s budget vote was tabled in Parliament. What follows is a transcript of the speech given by DA leader Mmusi Maimane during the budget vote.

Like many South Africans I grew up believing in the ANC as the party of liberation.

It was the party of my parents. The party that turned this country around and set our course for a future that was infinitely better than our painful past.

Back then, the ANC made life better for millions of South Africans.

It brought clean water, electricity, street lights and waste collection to places that had none.

It built RDP houses all over the country.

It introduced a social grant system that shielded the vulnerable from the harsh impact of poverty.

In those early days the ANC truly was the party of and for the people.

But it didn’t last.

One by one, honourable leaders made way for opportunists until nothing remained of the original movement.

I could not have imagined that the party that liberated us would end up captured and corrupted. The party of Oliver Reginald Tambo, whose name is invoked by every ANC speaker in these debates.

We would do well to remember what Albie Sachs said about Tambo, and I quote:

“Anyone claiming to speak in the name of Oliver Tambo would know that his intrinsic sense of political honour made him totally and utterly opposed to attempts by people to use the name of the struggle for material accumulation, personal or family enrichment or individual ambition.”

Every time you mention OR Tambo you remind us how far the ANC has fallen.

It pains me to say that the ANC of Oliver Tambo doesn’t exist anymore, and hasn’t for many years.

This happened. This man happened. He killed the ANC.

Make no mistake, it was already wounded before he plunged the knife in weakened by a culture of patronage and corruption and crippled by cadre deployment.

But he struck the final blow. He wiped out Oliver Tambo’s legacy to make himself rich.

First he killed the ANC and now he is killing our country.

Today we vote on the budget of the Presidency.

But we cannot stand here and pretend that we’re voting on a budget that will serve the people of this country.

We cannot ignore the fact that the President of the Republic has made a crooked deal with a crooked family, and now they own him.

We cannot ignore the fact that the President appoints cabinet ministers and board members of State-Owned Companies according to this family’s instructions, because thatâ€™s part of their deal.

We cannot ignore the fact that our President has opened the doors of our Treasury to this family â€“ to give them mines, contracts, advertising revenue â€“ because that is the crux of their deal.

We cannot stand here and pretend that the Presidency is anything other than the headquarters of the Gupta empire, with President Zuma fronting for them.

The budget weâ€™re voting on today is nothing more than a sponsorship deal for a corrupt syndicate.

If we vote for it, we support a budget for a Mafia shadow state.

Section 85 of the Constitution says that the executive authority of the Republic is vested in the President. So why is ours vested in Dubai?

This is a budget for President Gupta. Keep that in mind when you cast your vote.

Our nation is facing crisis after crisis.

Nine million people wake up every day knowing that they wonâ€™t find work.

We have a junk status economy and investors are leaving our shores.

Our education system is considered among the very worst in the world.

Our children disappear every day. Women are raped and murdered every day.

These are the things our President should be talking about, but he says nothing.

They are the things we should all be talking about. But here we are, discussing emails and how President Zuma sold our country.

First he killed the ANC and now he is killing our country.

And the question is: What did you, the ANC, do about it? Because it was within your power to stop him.

If you had the will and the conviction to do the right thing â€“ to do your sworn duty to your country â€“ you would have stopped him.

If you could see beyond the factional loyalties, the perks and the privileges, the Gupta party line, you would have stopped him.

But you werenâ€™t prepared to do that, were you? Because if you were, you would have done so a long time ago.

Youâ€™ve had plenty of opportunities.

On six occasions in the past seven years you could have supported a Motion of No Confidence in President Zuma. But you didnâ€™t.

You could have removed him from office when the State Capture Report implicated him in corruption on a grand scale. But you didnâ€™t.

You could have removed him on the weekend after thousands of emails linked him to the corrupt Gupta empire. But you didnâ€™t.

Instead you rallied around him every single time.

You have shown South Africa your true colours.

The truth is President Zuma and the ANC are one and the same. And thatâ€™s why the ANC cannot fix itself.

Any new leader at the top will just be a new front for the same corruption and the same looting.

You have left South Africans no choice but to vote the ANC out of government.

We dare not languish in hopelessness. When things fall apart, they fall into place.

President Zuma may have killed the ANC, but we will not let him kill South Africa.

We have a vision of a South Africa that has reinvented itself and is flourishing under a new government.

We have a vision of a South Africa that belongs to all and that works for all who live in it.

We have a vision of a South Africa where every young person has opportunities to become whatever they want to be.

To make this vision a reality will require many allies. It will require the cooperation of every party and every person who shares our dream for an inclusive, forward-looking South Africa.

It will also require collaboration with the good men and women who remain in these benches to my right, torn between their love for their country and their loyalty to a party that no longer exists.

All that matters is that you want whatâ€™s best for the 56 million people of this country.

Anyone who agrees with the values that form the foundation of our plan to rebuild South Africa is welcome on board.

These values are: constitutionalism, inclusive economic growth, non-racialism, a capable state and zero tolerance for corruption.

If we can agree on these things, then we can work together to rebuild this country the way we want it to be. No corruption, no stealing, no state capture and no Guptas.

But Iâ€™m counting on our allies here in these ANC benches too.

Because if you want the same things for our country â€“ and if you cannot stand what has been allowed to happen under President Zuma and the Guptas â€“ then we should be on the same side.

We should be building a post-ANC South Africa together.

In this post-ANC South Africa, we will put the education of our children first by supporting poor schools to become centres of excellence. No child will be left behind.

We will work hard to create a range of education, training and work opportunities for all young people leaving school.

In this post-ANC South Africa we will recognise the important role investors and entrepreneurs play in creating jobs and fighting poverty.

We will modernise our economy and we will invest in industries that make us globally competitive.

In this post-ANC South Africa we will double the Police Force and we will secure our borders, but we will also look at ways to attract skills and talent from across the continent.

We will choose our global friends well, and then stand by them in their time of need.

Friends such as my Zambian counterpart, Hakainde Hichilema, who was thrown in jail by a corrupt government. He will know he can count on the support of the South African government.

In this post-ANC South Africa we will do all we can to create opportunities for people to stand on their own two feet and escape the dependency on social grants. But, for those who need them, we will double the grant income.

In this post-ANC South Africa we will elect a president who will use the Presidency budget to serve the people, and not to stay out of jail.

This is our plan to bring our country back on track. And parts of this plan are already underway.

Our new coalition governments in Johannesburg, Tshwane and Nelson Mandela Bay are already making inroads into reversing the damage left behind in these cities.

Coalition governments are never easy, but we are making them work for the people of these cities. And we can make them work in national government too.

But it will require a big shift in the way we all think of our roles in building South Africa.

It will require many of you to accept that the ANC you once knew no longer exists.

Jacob Zuma killed that ANC. We will not let him kill South Africa too.