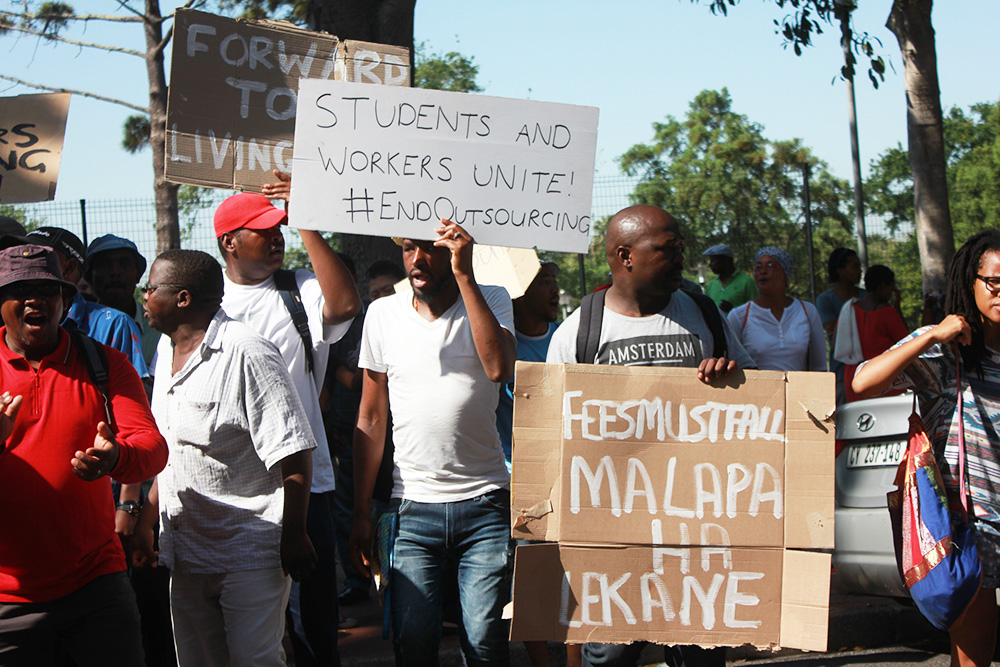 The Fees Must Fall movement has proven that young South Africans have the potential to contribute to mass struggles. The impact and success of student-staff alliances have been seen in protests at universities – university staff supported students during #FeesMustFall protests at Wits , and students collaborated with workers at UCT to fight against outsourcing. But some, like student activist Brian Kamanzi, have asked whether these alliances have gone far enough. Kamanzi pointed out that, while we as South Africans are reaching a â€œturning pointâ€ in history, we barely acknowledge the commonality of our struggles.

Workers from the National Education Health and Allied Workers Union (Nehawu) at the University of Pretoria (UP) are currently protesting for better wage benefits. They are demanding a 7.5% wage increase and a 13th cheque, but have reached a deadlock with university management

Workers have complained that students have been reticent in supporting their struggles. Nehawuâ€™s organiser on higher education, Ntsako Nombelani, told The Daily Vox that workers need studentsâ€™ support. â€œIt is very important for all students to support us because we canâ€™t separate students from the struggle of the workers,â€ he said.

Last year, 1 000 workers at UCT were insourced, following pressure from workers and students. Some workers, like cleaners and gardeners, saw their salaries double as a result.

Wits University history professor Noor Nieftagodien told The Daily Vox that student-staff alliances at universities strengthen protests. â€œWhat experience has shown us from 2015, particularly around the partial success of insourcing at some universities is that when workers struggle against outsourcing, they had limited success. But when the students came out to show support, the battle was won, or part of the battle was won,â€ he said.

Nieftagodien said alliances like these also helped to ensure that students and workers remain aware of their respective goals and how they affect each other. â€œStudents and workers need to ensure that oneâ€™s success does not the affect the other, because if workers are insourced or get a wage increase, then this in turn may mean an increase in fees for students,â€ he said.

*Richard Moeketsi, an animal caretaker in the UP veterinary department, believes students arenâ€™t offering more support because theyâ€™re scared of being victimised by the university. â€œThey are usually present when we are handing over memorandums to management,â€ he said.

Fumani Mabundza, a member of Sasco at UP, agreed that fear of victimisation prevented closer alliances between students and workers. â€œThe university reacts hostilely to student participation in protests, and we fear facing suspension. For now, all we can do to show support is to [attend] when they have meetings with management or when they are picketing outside university premises,â€ she said.

But *Susan De Beers, who works at UPâ€™s Alumni House, said she hoped students on campus would start to involve themselves more in workersâ€™ marches. â€œThe economy of the country is deeply affecting us, because we are underpaid. They should support us more, because we are here to serve them but we are not getting paid well,â€ she said.

Sibusiso Mnisi, branch secretary of the Young Communist League (YCL) at UP, said that students have to support workers protest because they also benefit from them. â€œThey are fighting to better our lives so we, as UP students, have to be in solidarity with the workers,â€ he said. Mnisi said the YCL is looking at ways for students to support workersâ€™ movements without fear of victimisation.

Kamanzi also noted that many workers and unions have openly supported university students in their struggle for free education. Therefore, students should look into broadening the fight for free education into a movement to help fight other struggles in society.