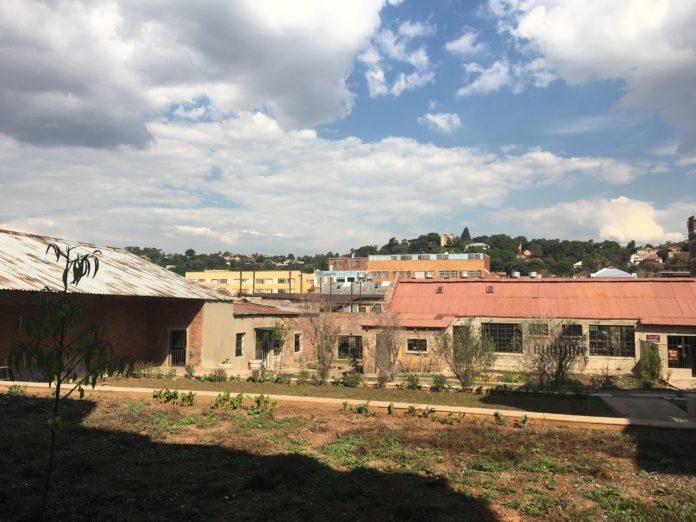 On the eastern edge of the Johannesburg central business district, the suburbs of Bertrams, Troyeville, New Doornfontein, Judith’s Paarl and Lorentzville can be found. These small towns were originally founded during the gold rush that took place on the Witwatersrand. As most towns go, these suburbs have been through cycles of renewal and degradation. A developing project in these areas is trying to renew these suburbs once more: The Maker’s Valley project.

Stretching all the way from Ellis House near the iconic Ellis Park Stadium to the Bertrams Boys and Girls Club to Victoria Yards and the Skills Village, all these projects form part of the Maker’s Valley. Walking through these areas, you might be surprised that such hidden gems lie in the corners of each of these suburbs.

Industrial areas surround these suburbs making it not the most attractive places to visit. However, walking into each of these projects, it’s easy to see the kind of renewal and rejuvenation project that is taking place.

Visiting Victoria Yards, one element of the Valley on a Thursday afternoon the area around it was quiet. Most of the people are busy working at car replacement centres or the various factories that dot the areas. Across from Victoria Yards is the massive headquarters of Nandos. The huge shining buildings are a stark contrast to the developing Victoria Yards complex. The once abandoned building is slowly being refurbished and occupied by creatives from all fields.

The Yards was also relatively quiet except for the ongoing construction taking place around the entire area. Throughout the interviews with Simon Sizwe Mayson, Hector Dibakoane and Sasha Thabo, the sound of construction and creating would be heard in the building. Mayson and Dibakoane also referred to how the space and concept of Makers Valley was constantly in progress.

The Bertrams Boys and Girls Club based at the Maurice Freeman Recreational Centre is part of the bigger Boys and Girls Club in South Africa. It was the third one started in Johannesburg. The club provides a safe space for young children from the area to come to after school.

The Ellis House Art Studios is a collection of art and design studios in New Doornfontein. It’s a collaborative space where different artists come together.

At the end of the line is Skills Village. This space in Bertrams is a capacity building programme when young people are taught skills and learn creativity.

In the middle of these projects is Victoria Yards. In the old factory buildings different artists and creatives have come together “social development as well as a commercial enterprise.” There are artisan studios, urban farming, skills development, and visual arts.

The idea behind the project

Speaking to The Daily Vox, Mayson said the project “started with a group of creatives and businesses within the creative industry in this area.” The creative businesses got together and were provided with financial support by the Johannesburg Roads Agency.

Mayson says it was initially called Makers Way but after public consultations it was decided that the project would be called Makers Valley.

Mayson is currently doing a PhD in enabling a well-being economy. He says that is the driver of the work he does and the work of the partners of the project. “How do we enable to this neighbourhood as being a neighbourhood for makers and changemakers. That’s kind of the tagline that we’ve probably going to start pushing,” he said about the project.

Dibakoane who works on a project called East Jozi says he and his partners do community work that targets the youth and provides a “safe space for the youth where they can get positive energy.” Growing up in Soweto, he says he saw the impact of not having safe spaces and that’s what drew up to the Makers Valley space.

“We came to Victoria Yards because we were eager to know what it happening in our community. So the woman who was in charge at the time introduced us to Simon and we met other people who had the same vision we had.” This is how he became a part of the project. He also helped put together a youth expo which brought young people from around Johannesburg together to learn entrepreneurial skills.

Both Mayson and Dibakoane say they like the project because it’s not just about people who have a vision but it’s also people are doing things about it.

While this project is aimed at the entire surrounding community and broader Johannesburg area, there is a special focus on young people. Dibakoane says this because as young people it’s very crucial how your energy is directed.

“Young people come to the space and they can get inspiration and hopefully find direction. Not everybody can have a job but everybody has a talent,” Dibakoane says.

For Mayson he believes the surrounding community can be seen as a microcosm for broader South African society.

“We have the Nando’s Head office here but we also have informal settlements of the same road. You can get this at a citywide scale all over South Africa,” Mayson said. He believes that using social integration can be a tool to overcome inequality.

From this it can be seen that the project is not just about opening up about creative spaces but also looking at important societal and economic questions. Thabo is currently working on reviewing policy around special economic zones. He is trying to find where the Makers Valley project can fit in so that it can be registered.

“We are trying to develop the policy which is used overseas for companies that enable social entrepreneurship,” Thabo said adding that they are trying to learn from those policies to see how it can work in South Africa.

Leaving Victoria Yards, it is an interesting space to walk in. There’s a lovely hidden gem of a restaurant in one of the buildings leading to Skills Village where Mama Magwinya sells magwinya for people working around there. There is an art gallery and a shoemaker. There’s terrific street art. There’s a bit of everything.

So if you’re looking for a little bit of creativity and a whole lot of community, Makers Valley is a good place to visit.