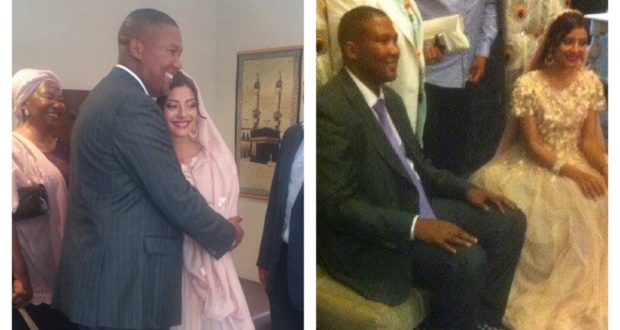 Mandla Mandela, grandson of uTata Nelson Mandela, has made waves after marrying for the fourth time, this time to a Capetonian Muslim woman. And that too, after reportedly converting to Islam two months ago.

All I can say to Mandla Mandela, God have already forgiven your sins for seeing the light and truth. Welcome to the religion of peace.

But there seems to be quite a bit of curiosity about what his new religious affiliation means for his role as tribal leader.

I wonder if Mandla Mandela will still maintain his Xhosa customs and traditions now that he is Turned to Islam.

Mandela, whose full name is Nkosi Zwelivelile â€˜Mandlaâ€™ Mandela, is the chief of the Xhosa tribe which the Mandelas are a part of, the Mveso Traditional Council. He released a statement late on Sunday saying that he was â€œhonoured and delightedâ€ to announce his marriage to Rabia Clarke, in Cape Town on 6 February 2016.

â€œI wish to extend my heartfelt gratitude to Rabiaâ€™s parents, her extended family and the Muslim community, for welcoming me into their hearts. Although Rabia and I were raised in different cultural and religious traditions, our coming together reflects what we have in common â€“ we are South Africans,â€ he said.

Blessing from above. My wife and I. pic.twitter.com/VJ9mu58b0A

(Somewhere in Johannesburg, Herman Mashaba must have teared up reading that).

In a video posted on Facebook, Sheikh Ebrahim Gabriels is seen performing the nikaah, or Muslim marriage ceremony of Mandela to Rabia Clarke.

Mandela has previously been married three times. In 2004, he married Tando Mabuna-Mandela, in 2010, he married then-20-year-old AnaÃ¯s Grimaud (who later changed her name to Nkosikazi Nobubele). This marriage was later annulled after his first wife took him to court for being a bigamist – and there was also a paternity scandal after the son she gave birth to in 2011 was shown to have been fathered by someone else. In December 2011, he married Swazi princess Nodiyala Mbali Makhathini, but that marriage was also annulled in 2014.Â

Weâ€™re not sure if his divorce from his first wife has indeed been concluded but you have to hand it to Mandla for continuing to believe in love.

But the Congress of Traditional Leaders of South African (Contralesa) isnâ€™t happy about this. They asked that he step down as chief because of his new religious affiliation, saying that he cannot lead his people as a Muslim.

“We reacted with shock on the news of his conversion. We were also very concerned. What we know is that the woman converts, not the man. That is our custom,â€ said Chief Mwelo Nonkonyane, chairperson of Contralesa on Tuesday.

Will Mandelaâ€™s new religious affiliation impact on his role as Chief of the Mvezo Traditional Council? Where our isiXhosa peeps at? You tell us what you think.Â