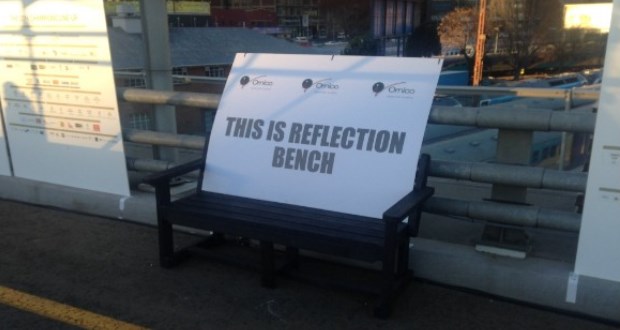 On Thursday night, at the CEO Sleepout, a bunch of rich people pretended to be poor to raise money for charity. And they raised millions, which is commendable, obviously. MANDY COLLINS asks whether this is really the best we can come up with.

I could almost stomach it if they arrived in a single layer of clothes, were given a blanket and they actually braved the biting cold. Make no mistake, itâ€™s cold tonight. But thatâ€™s not what was happening.

Instead they had fires, free WiFi, a pop-up shop, catered food, branded tin mugs, presumably as souvenirs of their experience, and so on and so forth. There was even a “reflection” bench. (No, I donâ€™t know either.) A public road over a bridge will be closed for several days, the bridge was specially cleaned, and there were lights and cameras and action.

Over on social media, thereâ€™s a barrage of negativity towards the event, by people like me, who find the event crass, insensitive, and frankly narcissistic. Thereâ€™s a blithe, arrogant kind of mockery in glamourising poverty with designer shacks and gourmet soup so you can pat yourself on the back in the boardroom or at golf.

On the other side of the fence are those focused on how much money the event raises for charity. People are angry that thereâ€™s criticism of something that does a lot of good. Accusations of slacktivism are levelled at those who criticise; youâ€™re only allowed to have an opinion against the event, apparently, if you yourself have raised similar millions. Inevitably the awareness argument has been raised: how else does one raise awareness about this issue? (Iâ€™m just going to point out at this juncture that itâ€™s impossible to be unaware of homelessness in South Africa, and leave it at that.)

And I stand amazed. In a country that demonstrates creativity around every corner, is this the best we can come up with? Of course raising millions for charity is a good thing, but in a country of such immense inequality, surely we can do so in a way that allows the poor some dignity instead of turning poverty into a three-ring circus?

Because under that bridge, and countless others, in doorways and alleys and fields, there are men and women and children who sleep rough every night, not just in adverse weather conditions, but in very real danger of being assaulted or raped or even killed. They have no food, no clothing, no work, no dignity. They will not be sleeping in a cosy bed tomorrow night. This event is not even remotely about them.

So in a spirit of constructive criticism, let me make some suggestions. Iâ€™m just one person, and I can think of a couple of alternatives, just off the top of my head:

No doubt people will pick holes in those ideas. Thatâ€™s okay. Theyâ€™re just a beginning. Iâ€™m just one person. But it has to start somewhere. Iâ€™m only trying to demonstrate that there are other ways, if the event truly is about raising the money, and not about the companiesâ€™ brand visibility.

And finally, to accuse people of slacktivism for their opposition to the event negates the small unseen acts of charity that ordinary people do every day, and without which many would be even worse off. There are many good people in the world who donâ€™t have the wherewithal to donate to something like the CEO Sleepout, but who do what they can, wherever they are. Their contribution is no less important for being of insignificant monetary value.

South Africa is still a deeply divided country, and many of the divisions between rich and poor are not only huge, but still run along racial lines thanks to our history. Events like this serve only to broaden those divisions, and break down the social fabric of our country, and no amount of money raised will undo that.

Mandy Collins is a freelance editor and writer. This post originally appeared on her blog and has been republished with permission.Â