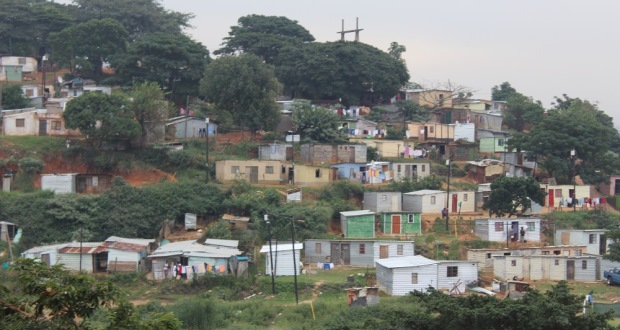 The extreme weather conditions gripping the country this winter are also exposing the country’s faultlines. We’ve had hail storms, floods, tornadoes and landslides but there is, and has always been, a distinct pattern to who is affected by these conditions. The poor, especially those living in informal settlements, bear the brunt of facing hazardous weather conditions and natural disasters.

Shack-dwellers movement, Abahlali baseMjondolo (ABM) lost two of its members on Monday 25th July, during a landslide caused by the storms in eNsimbini, a settlement near Durban. The deceased, Nkosinathi Raphael Myeki and Ntombifuthi Prudence Sithole, were trapped beneath their collapsed shacks, rubble and debris. Their bodies could only be recovered on Tuesday after residents worked throughout the day digging in search of them. Thembani Ngongoma, an ABM spokesperson, told the Daily Vox that many were traumatised by the loss of life on Monday and that a mass gathering was currently taking place to decide on a way forward.

“We are currently waiting for the mayoral candidate to come and visit the communities and the people who are aggrieved here. We are busy preparing for their funeral which is happening this Saturday,” Ngongoma said.

Zandile Nsibande, another ABM member, said a storm of this nature is quite unusual for the area but that the shacks and informal dwellings still remain particularly vulnerable to the elements. While no other people in the area were hurt, there were a number of other shacks that were damaged. Nsibande said six families were personally affected, but managed to escape without harm.

He stressedthat inequality affected the poor in ways that could never be experienced in other contexts – not just around eThekwini, but for all shack dwellers.

“When you speak of an informal settlement, all of the weather hazards are a problem. But this time around we had these torrents of rain which resulted in a landslide. It’s not only the rain, in fact. Shack fires are also a huge problem,” said Ngongoma.

The eSimbini community is but one of many places affected by the floods in and around Durban on Monday. uMlazi, Mayville, eZimbokodweni, oThongathi, uMlazi, Bonela, Crimpy Avenue, Isipingo Hills and eManzimtoti have also suffered harm. At least four others have died as a result of the flood with more than 20 escaping with just injuries. While most of the harm was due to structural damage – walls, ceilings, cars and other heavy objects colliding or falling on people – others were washed away by the floods.

The search for many unaccounted for people continued into Thursday, with many communities, such as the Chris Hani informal settlement, searching through the debris and mud for those missing.

The Durban Disaster Management unit has been putting in many hours since Monday but remains on high alert. However, there is still great need for further community and government support.

The ward councillor for eSimbini visited the site of the disaster on Tuesday and was asked to provide alternative accommodation to the affected families – currently settlements without community halls have to rely on the goodwill of their neighbours. Nsibande said there was a need for alternative accommodation for the families whose homes had been destroyed by the landslide.

Although it seems that local government has been responsive, Abahlali warned political parties against using the disaster to campaign for the upcoming elections.

“We are not accepting any promises from government,” Ngongoma said, “we are saying that if they are sincere let us walk the talk together. Because someone can make a promise, but if they don’t keep the promise, you can’t hold them accountable unless every step is inclusive.”

The Daily Vox has reached out to the Durban municipality, asking about what is being done to support the various affected communities and we are currently awaiting their response.

Nsibande said informal housing was a problem in itself because it always left one vulnerable to disaster and exposure.

Ngongoma feels one of the things government overlooks is the need to decentralise services, industry, institutions and opportunities away from the major cities because this in fact creates housing shortages in the regions but also negatively affects rural communities.

“People who are living in shacks did not bring this unto themselves, as long as the necessary needs for the people are centralised in the big cities like eThekwini, Cape Town and Johannesburg – such as facilities that accommodate higher education and thus provide job opportunities – there shall always be an influx of people from rural areas into the big city,” said Ngongoma.

How can you help?

Funds, blankets and other necessities for the aggrieved and affected families of eSimbini may be donated by contacting the Abahlali baseMjondolo office on 031 304 6420.

SLSJ UKZN have also put out a call for of soup, sandwiches, clothing (especially jerseys, socks, beanies), blankets, plastic sheets, shelter fees (average of R30 for one night) etc are needed the most.

You can also call Stand UP! via 082 561 0700 (call or Whatsapp Douglas Ritson). Or email Shabnam Palesa via StandUpFoundationSA@gmail.com if you can assist with transport logistics.