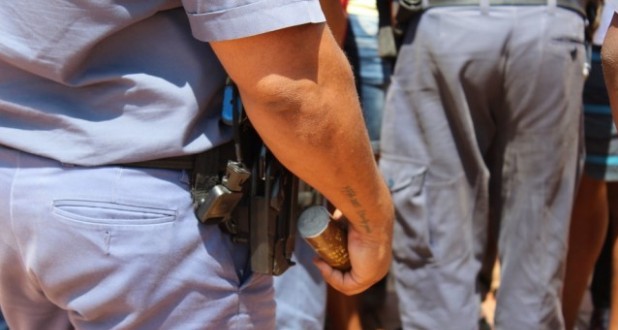 The events of the last two daysÂ at the UKZN Pietermaritzburg campus are the result of a long and protracted/intermittent stalemate between university administration and student leadership regarding the issue of fees, as well as charges raised against students participating in protest action. On Monday afternoon, a student protest march spilled off campus and onto a suburban road, resulting in SAPS firing teargas and rubber bullets at students and into university residences. On Tuesday morning, following a long night of discussion and deliberation, the students engaged in a peaceful protest, mobilising across campus. On several occasions during the morning, SAPS, private and campus security barred students from entering buildings and parts of campus, shooting teargas and rubber bullets into the crowd.

After dispersing, students reconvened and resumed their peaceful protest on the main campus lawns – this was when a group of concerned academic and professional staff decided to form a shield between students and SAPS, campus security and private security.

Throughout the morning, students were frustrated by the fact that their repeated calls for a line of communication to university management were met with silence. Instead, management circulated a statement claiming that all was calm on all campuses and that they had â€beefed upâ€ security. The effect of this â€œbeefing upâ€ was palpable when several police vans, including a Nyala, pulled onto campus. Students reacted with both fear and anger. The strategy, on the part of university management, of “showing strength” and intimidation signalled to students that their concerns were dismissed and that they would be brought “in line” by force.

Throughout the semester, the university has maintained their strategy – to increase and “beef up” campus security, despite the fact that this has had little effect on resolving the dispute. Similarly, todayâ€™s decision to suspend the academic programme and bring the September mid-semester holiday forward by one week, seems little more than a ostrich-like “head in the sand” response. Effectively perpetuating a cycle of violence, intimidation and retribution â€“ all of which undermines the academic programme and safe learning environment. Clearly, a different response is needed.

A second critical issue relates to the conduct and behaviour of police and security personnel on university campuses. On TuesdayÂ afternoon, at about 15:00, while driving two injured students to a nearby hospital, we witnessed 10+ armed MI7 (private security firm) security personnel, as well as police, chasing unarmed students across and off campus, onto private roads and into private student “digs”. This conduct is most definitely beyond the brief of security personnel – to protect persons and property on campus â€“ yet in contexts where students are framed as violent and dangerous, a certain degree of force is regarded as legitimate and appropriate.

This type of action signals a particular attitude towards black students, especially at smaller provincial university campuses such as PMB, MUT, UniZulu and WSU, where intimidation and violence are used to force students into submission. All the while demanding that they be grateful for the chance to be at university in the first place. Many students have lamented the fact that the kind of brutality they have experienced would never have been inflicted on their white counterparts in South Africa. Precisely because black students are reported as criminal and violent, their claims and concerns are easily dismissed and obscured â€“ all the hallmarks of a future Marikana?

Witnessing the enthusiasm and “glee” with which police and security staff enforce the interdict, it is hard not to agree with studentsâ€™ assertions that this is a level of intimidation and brutality by police and dismissal by university management reserved for black students at provincial campuses.

Dr Mari H Engh is a postdoctoral researcher in the School of Applied Human Sciences at UKZN, with a specialisation in gender, sport and migration.

Dr Federico Settler is a lecturer the School of Religion, Philosophy and Classics, UKZN, with expertise in Sociology of Religion and black studies.