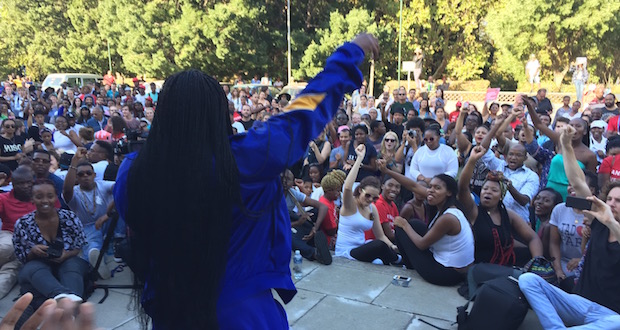 #StopRacismAtPretoriaGirlsHigh has reopened a can of worms for many of us who attended private and ex-model C schools. If I’m honest, this was likely inevitable. The violence of colonial schooling, in the context of calls for decolonisation, remains the white elephant in the room we need to be talking about.

We all have those stories.

In my grade 11 year at St John’s College, I was to speak at our Thursday mass assembly for the first time.

Speaking at “the amphitheatre” was regarded as an auspicious privilege at St John’s usually reserved for the headmaster, head boys, senior teachers and a few prefects.

The entire high school was present for my address. I had prepared my speech and emphatically began my report to the school on our intentions for community engagement beyond the confines of our ivory tower.

In the midst of my address, however, was a disturbance.

It began as an indistinguishable murmur among a few students, followed by soft chuckles. After a while, though, the murmur grew bolder and I was able to discern its contents.

Oh lord. The indistinguishable mimicking of the Durban Indian accent. I was scandalised at first such behaviour was normal at a school dominated by predominantly white experiences, but in front of the headmaster? Really?

But I refused to be derailed by it. I had never lived in Durban and had no relatives from KwaZulu Natal. The accent was not mine, so what was the source of humour?

Concern set aside, I carried on my address, just as others caught on to the fun and began to chime in.

After some time though, I found myself getting angry.

I was not sure why. This was not a unique experience at St John’s, or probably any private or ex-model C school. Heck, this is likely just one story in an ever-growing anthology of unwelcome experiences for people of colour in such spaces. A mild one.

Yet despite knowing this, I stopped my address mid-sentence and, looking directly at the crowd, stated firmly and defiantly: “Yesâ€¦ I am Indian”.

Even as I said the words, I was unsure as to why I felt the need to say them they just seemed to pop out. But before I had a chance to process this, I was taken aback as the student body erupted in front of me.

Some roared in laughter, while others seemed to be cheering. I was not sure whether I was being celebrated or ridiculed. This confused me even more. After the event, many asked why I’d made such a “random” statement but I had no answers for them. At the time the meaning behind what I’d said, and why I had said it, was as alien to me as it was to them. I just knew that I felt compelled at the time to affirm who I was.

Many of us have begun reconciling these stories

Coming to terms with many of these experiences is always a lengthy, confusing process. For a long time, many of us were somewhat oblivious to the historical power dynamics that afflicted us. And I imagine there’s good reason for this.

Perhaps it’s because we were never taught the language and conceptual frameworks to be able to understand what, exactly, was happening to us?

Perhaps as a means of survival, we subconsciously learned to block out uncomfortable thoughts?

Perhaps it’s a lot safer to conform one’s identity than to attempt to claim space for it?

Perhaps we’d learned that performances of “whiteness” were indeed the route to individual success?

I’m still not sure. But years later, having been part of the resurgence of Black Consciousness and involved in the fallist movements of 2015/16: the above questions have a renewed relevance to me and to many others.

I now know that teenage me was subconsciously aware of the profiling that was taking place – that I felt the need to affirm my identity to make it clear that I would not be made to feel ashamed of who I was.

With such experiences, it is not difficult to imagine the pressure of desiring to approximate towards the “norm” as a means of survival. The list is probably extensive but this would likely include giving up your home language, adapting accents, sidelining cultural heritage, accepting non-racialism without being exposed to Black Consciousness, adopting rudimentary understandings of manliness/womanliness, internalising anti-blackness and generally becoming fluent in understanding how white people perceive the world.

Yet despite all this, the fact still remained that such institutions were historically built to cater exclusively to a certain orthodoxy of people. Namely: white, mostly Christian, heterosexual folk of the elite kind.

I, and many others, were not naturally this, and thus would always remain outliers to the space. This historically entrenched legacy is what sets these experiences apart from teenage angst and sentiments of not belonging – as John Robbie patronisingly implied over the radio on Monday.

After all, it was only through some accident of history that these institutions were mandated – by politics and law – to allow us entrance into this elite club of theirs. Provided that we followed in its rules, and integrated into its hegemonic culture, of course.

But it had its perks, though.

It was there we learned to carry ourselves as confident, articulate and “worldly” members of society. It was there we were equipped academically, through vast pools of resources, to have a minimal chance of failure and a strong likelihood of making it to some of the best universities.

We were saturated in privilege to an extent that many of us were, and perhaps still remain, completely oblivious to.

But it is within those same walls where sentiments of overt homophobia were also compounded, emboldened and legitimised. In all-boy schools such as mine, it was there that ideas of “men” as hypermasculine, dominant forces were enshrined and celebrated without critical engagement. Manifestations of rape culture were some of the purest sources of camaraderie among us. Jokes of borderline sexual assault were often a topic of humour and this culture persists with many of us even now.

Our heritage, culture, political views and yes even hair became unwelcomed sites of violence. Perhaps the most dominant of social lessons learned in the space was that if we managed to “correct” those aspects of our identity which didn’t quite fit in, we’d be accepted to dine in the banquet hall reserved for the elite.

We would become among the winners in life the ones who were entitled, perhaps even destined, for all the good the world had to offer. And once you were there, life always seemed to favour you for some unintelligible reason.

Some of us ended up agreeing to the unspoken terms – consciously or otherwise.

Others, like the girls of Pretoria Girls High, have found themselves in the business of disrupting banquets.

It is long overdue that progressive alumni of private and ex-model C schools begin to critically reflect on whether the system that molded us meets the standards of our vision for education in SA.

It makes little sense to talk of decolonised higher education, accessibility, and social justice while basic education remains a tradeoff between elitist white institutions and underfunded, unreliable schooling. Living in the most unequal society on earth, how do we reconcile these divergent realities? Do problems only matter when privileged kids face it, and how much weight should these issues carry in the face of inequality?

For me, these problems tie into, and mutually reinforce, the issues faced in higher education. They speak to intersectional inequality, gaps in accessibility but also the sheer ignorance and apathy of us privileged few – who’ve mostly divested ourselves from the fate of the marginalised. In being taught that we needed to reject aspects of ourselves, I wonder to what extent we now find it difficult to connect with those aspects of our identity without feeling a sense of shame? All this becomes entrenched in the formative years of school.

If #FeesMustFall is to continue, and have continued relevance for the decolonial project, it must broaden its scope and make room for the voices of these high school learners. And we, the alumni, also need to go back and confront those spaces. For their sake, but perhaps also for our own.