Home Cartoons #MugabeFalls: Weâ€™d vote for Comrade Bob on So You Think You Can...
WhatsApp
Facebook
Twitter
Email
Print 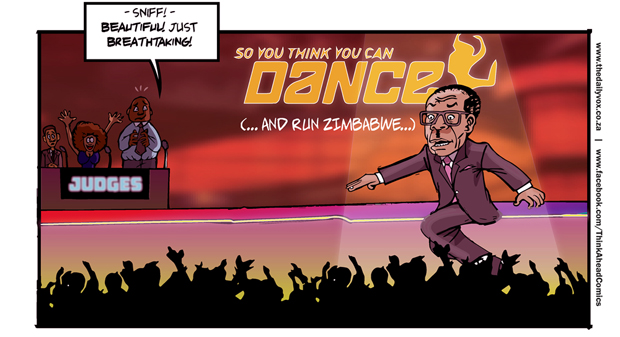 Zimbabwean President Robert Mugabe spawned a meme when he fell at Harare International Airport on Wednesday.

As Zimbabwean author Petinan Gappah noted on Facebook: â€œIt is not Mugabe per se that people are mocking â€“ who would mock a frail 91-year-old? It is the propaganda around him: the narrative of youthful vigour, the portrait with the dyed hair that is blacker than it was in his 50s, the weird chubby-cheeked photoshopping we saw on the 2013 election poster…Â  To me, this is more a joke about the projection of images of the president than it is about the president. In other words, the joke is on the state media. Not on Mugabe.â€

In the spirit of Gappahâ€™s comments, we think Mugabe would make a great celebrity on So You Think You Can Dance. Weâ€™d vote for him on any reality show â€” just as long as he didnâ€™t rig the contest!